Bavaria Update: Exploding Cases and Containment Theatre
The more they vaccinate, the worse it will get, but vaccinating is all they want to do

Almost 70% of adults in Germany are fully vaccinated. The rate in the most vulnerable 60+ age bracket is about 85%.

Where has that gotten us? Well, as of yesterday, in Bavaria, it has gotten us to 590 Corona-positive ICU patients across the entire state. On the same day last year, with 0% of anybody vaccinated, that number was 362. 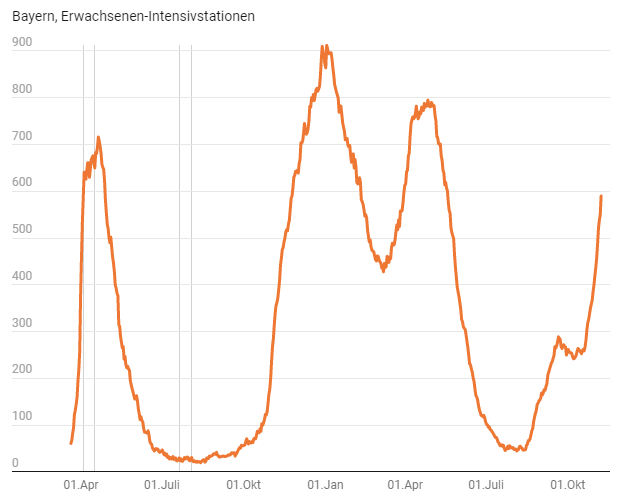 According to the latest RKI report, 60.5% of symptomatic cases from 4 to 25 October in the 60+ crowd were fully vaccinated, as were 44.9% of hospitalisations. Vaccines, it is clear, increase transmission, and then slowly withdraw their protection against severe outcomes. The August waves in Israel and the southern United States have foretold our future well, so far.

The 7-day case incidence, broken down by federal states, confirms that ICU admissions – a lagging indicator – will continue to rise over the next several weeks, whatever anybody does. 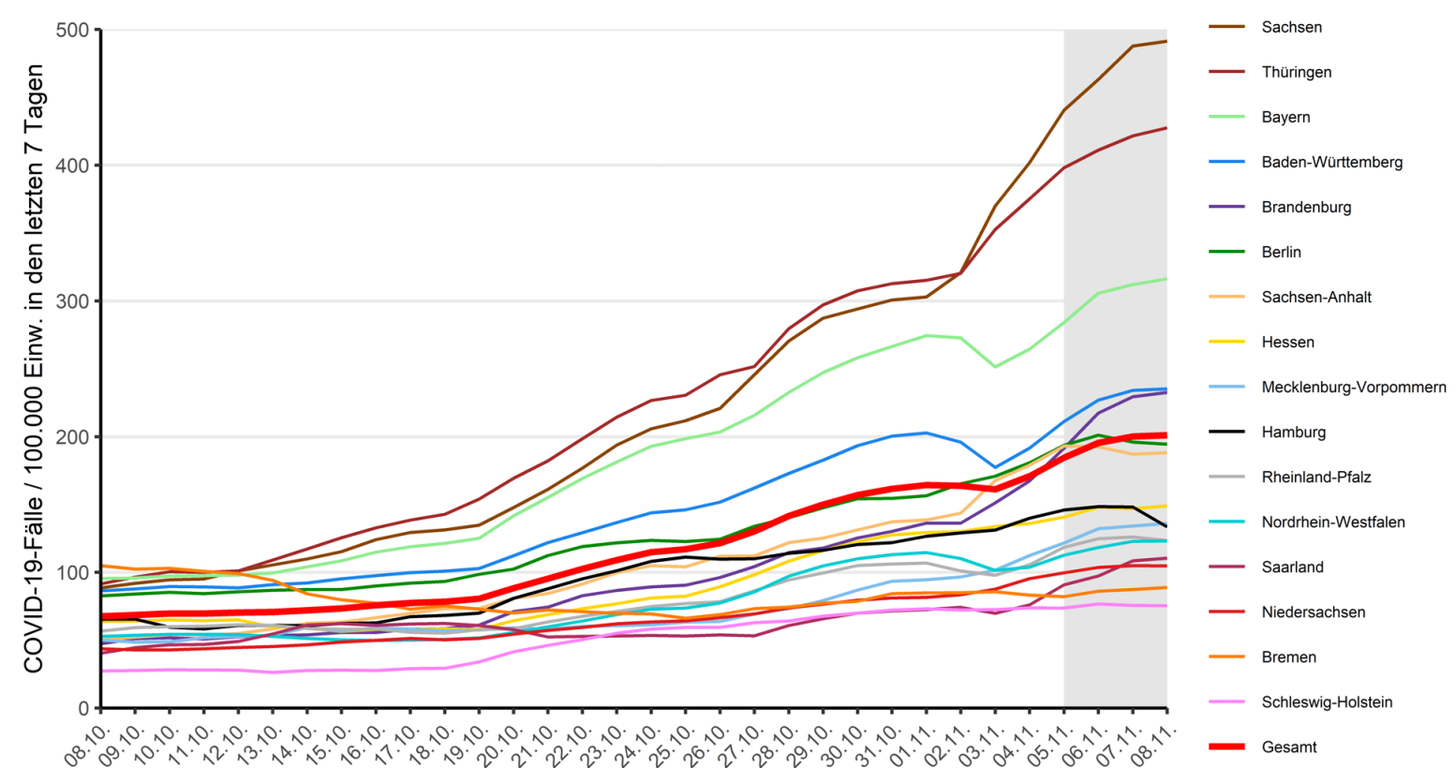 Finally, there is the district-by-district picture. Pink marks those districts with an incidence of 500 or higher. As was also the case last year, the fall wave begins in the south and the east. 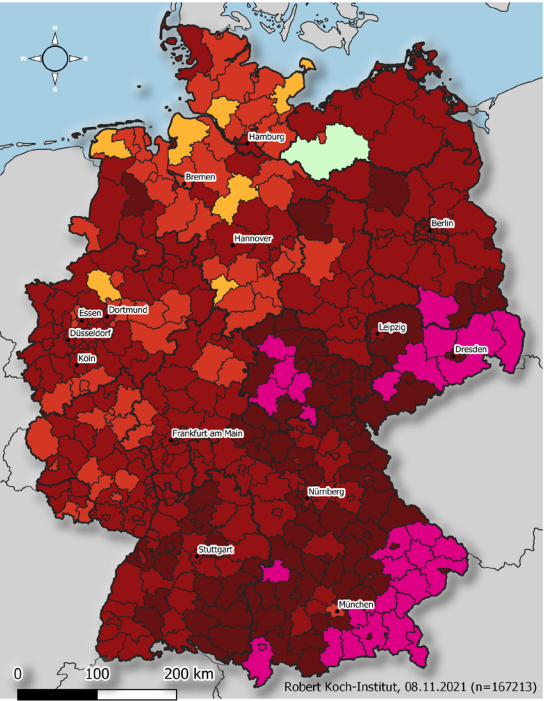 These highly predictable seasonal and regional patterns continue to be totally ignored by the press. Over the weekend, an amusing piece by Welt on the very high case rate in Miesbach (a town in Oberbayern, south of Munich) featured a stupid doctor and “district pandemic coordinator” named Florian Meier, speculating that it’s all down to kids holding Corona-Parties so they can achieve coveted “recovered” status. That the very same pattern was observed last year, and that high case rates among school-age children are an obvious artefact of school testing programs – both of these remain beyond the conceptions of Dr. Meier, Pandemic Coordinator for Miesbach.

On Saturday, rising ICU admissions caused Bavaria’s profoundly meaningless traffic-light alert system to tick up from “green” to “yellow.” The days since have seen such a steep rise that we are now on the edge of “red,” the highest stage of hysteria. Each colour imposes an array of contagion-suppression measures upon the population. Officially, the purpose of these measures is to slow the rate of infection and spare our hospitals. What do these measures comprise, you ask? How do our brave leaders propose to manage the contagion?

To begin with, we now have stricter mask requirements. Until yesterday, we were allowed to wear mere medical masks in public settings, but from yellow onwards FFP2 masks become the rule. Surely, this will save us.

Beyond masks, our old 3G framework, requiring that those who wish to participate in public life be vaccinated, recovered, or tested (geimpft, genesen or getestet in German) has been scrapped in favour of enhanced so-called 3G+ rules. The ominous “plus” means that the unvaccinated are now required to obtain not merely antigen tests, but PCR tests, for admission to restaurants and public events. These cost around 80 Euros and have substantial lead time. 3G+ represents a de facto ban on unvaccinated persons. Brothels and clubs have now gone over entirely to 2G, meaning that the unvaccinated can’t test their way in at all. Once we hit red, 2G rules will be expanded; and unvaccinated employees in offices of more than ten people must present antigen tests twice a week.

It is worse than a joke, all of this. Nobody even pretends to believe that these interventions will do anything. Not even the people making these rules can possibly have any faith in them. Unvaccinated people with negative tests are a far lower transmission risk than vaccinated people without them. The vaccines do not impact transmission after week 20, remember, and ever greater numbers of vaccinated got their second dose more than 20 weeks ago.

Aside from their increasingly obvious desire to engage in empty theatre, our bureaucrats have exchanged the hopeless goal of optimising case numbers, for the somewhat less hopeless goal of optimising vaccination rates. What a deep irony, that expanding vaccination will in the long run merely enhance infections and make everything worse. No satirist could have dreamed up this absurd situation.

UPDATE: Commenter ChildrensRightsAdvocate reports much the same situation in Belgium, with much higher vaccination rates – over 90% of all adults.