From the original article by Tom Fasano. Main credit to Michael Maciel.

The circle with a dot in the center is one of the oldest and fundamental symbols in existence. The Egyptians used it as the symbol for the sun. It was linked to the open eye, as the sun allows us to see, hence why they worshipped the sun God, Ra. But since God is timeless, space-less and consequently beyond human comprehension, how could anything symbolize God? 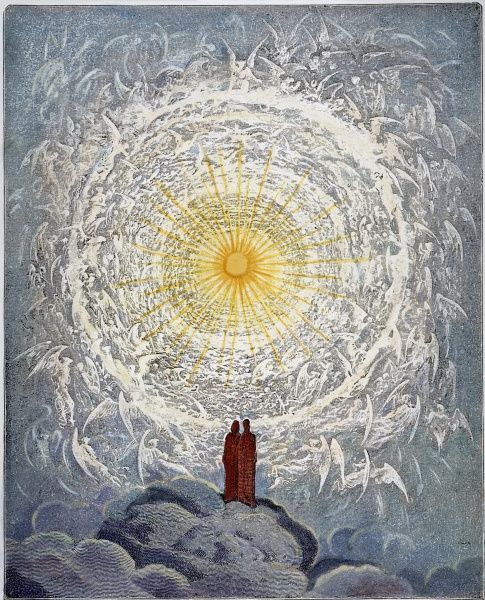 This is the problem the ancients encountered in their philosophical schools of thought. Instead of talking about God, they talked about God's aspects. They assigned names and personalities to them, thus they were labeled the Gods such as Zeus, Apollo, Poseidon, Athena, Mars, Venus, so on and so forth. Stories of their adventures with each other were symbolic descriptions of the relationships between different natural and metaphysical laws.

From Dante Alighieri's Divine Comedy, the Empyrean (EHM-PEER-EE-YAN), the true and ultimate heavenly paradise otherwise known as the firmament, is depicted as a circled dot, referred to as a circumpunct.

In regards to symbology, we must first realize geometry is not simply lines drawn on paper. Geometry is a description of the movement of force, frequency, and energy. As Plato said, God geometrizes continually.

If you ever saw a magnifying glass used to start a fire or seen a parabolic satellite dish, you'd know a circle with a dot in the center is more than symbolic. It is the power of concentration and action. Our minds work the same way. When we focus our attention on an idea the process of creation begins. Thus, the circle with a dot in the center is not a symbol for god as such, but rather it is a symbol for God in his creative aspect, God the Creator.

Symbols have power because they are patterns of creation. They show up everywhere, from the most sublime to the most mundane. The circle for instance, is a universal form. We find it at every scale in the world from atom, to cell, to eye, to planet, to solar system; the circle is there. But we must realize this form is not drawn, it's created. Anytime material is struck with energy, frequencies are radially dispersed outwards, such as the air from clapping your hands or a pond rippling from the skip of a pebble.

In Sanskrit the word anahata means unstruck or not hit. It refers to the sound not made, or the sound of spirit: The Om. Logos. The Living Word of God. The universal form of the circle is reflected in physical substance; it does not originate in matter. My kingdom is not of this world said Jesus. The symbol of the circle is of the higher order of reality. It is spiritual, not material. We're all familiar with physical sound: when two things strike each other, but what does the abstraction mean? If speaking sends a sound wave out in all directions, then perhaps thinking does something similar but on a larger scale.

Symbols have the power to activate creative forces within our subconscious. In Orthodoxy, Iconographers drew icons to represent perfect concepts physically, impeding idolatry. Marian iconography exemplifies the divine feminine, as creation must be birthed into the world. The circumpunct digs deeper than just human symbolism however; it could be the cell, the eye, the blood vessels, the cross section of the spine or even the birth canal.

To be conscious of yourself is to acknowledge your Creator. To create means to bring into existence out of nothing. There is no such thing as becoming one with God, as humanity can only build with the limited tools we're given. The infinitesimal dot serves as an absolute source: an unmoved mover to the realm of divine order. In some respect this symbolizes the meaning of creation. The Living Word is spoken. Only then is creation manifested.

If you think about truth as food, you need to stomach each sliver along your journey knowing you're in good company. Only then will the truth not only reside in you, but in some way become you. When we refuse to digest what's right in front of us, we deny our purpose and begin the process of death. Gluttonizing information as a replacement to faith will make one's ego (a word I rarely like to bring up) the focus of their consciousness.

Just as Adam and Eve ate from the tree of knowledge, heretics have the same desire to become their own God by appealing to the knowledge of the world. The device they use to justify this vanity appropriately sports the logo of a bitten apple. If you really believe you have all there is to know at your fingertips, you are no longer conscious of your self.