This is evidence that our vaccines may permanently compromise immunity to SARS-2, via Original Antigenic Sin — the phenomenon, long observed in the antibody response to influenza infections, that initial exposure to a pathogen (or a spike protein) shapes all subsequent immune responses to mutated, recombined or reassorted instances of that pathogen. Our Corona vaccines elicit antibodies against the spike protein alone, while natural infection provokes antibodies against other virus proteins as well, including the nucleocapsid or N protein. The broad spectrum of natural immune response is why recovered individuals enjoy much greater and longer-lasting protection, than people who have been merely vaccinated.

The vaccinators have always insisted that there’s nothing to see here. You can get the spike-specific protection of vaccination, they say, and pick up broader-based protection from low-risk natural infection later on. The problem, though, is that the vaccines appear to influence subsequent immune response, focusing antibodies on legacy spike and making it much easier for SARS-2 to escape immune resistance. Potentially for good, and in billions of people.

The PHE reports have been tracking antibodies against the N protein in blood donors for a while now, as a means of assessing the prevalence of natural infection in the population. Here’s what that looks like:

Notice how flat the prevalence of anti-N antibodies remains over time, despite pervasive SARS-2 infections across the UK. And notice how anti-N antibody levels remain especially low in the most heavily vaccinated age brackets. For comparison, anti-S antibodies in these same donors – which are elicited both by vaccines and by infection – have plateaued at 96%. If our vaccines were pre-programming the immune response to focus only on the spike protein, this is what that would look like. Thus the report authors are compelled to admit that prior vaccination inhibits anti-N antibodies.

We have very little data on the specifics of post-vaccination immune response, but a Twitter informant points me to this piece in the Journal of Infection. It’s a brief letter to the editor confirming the findings of the UK Health Security Agency that breakthrough infections in the vaccinated seem to elicit a vastly attenuated antibody response to the N protein, compared to infections in unvaccinated people. The authors report results from their seroprevalence study of 4000 hospital personnel. At the time, there had been very little vaccine fade and breakthrough infections were rare, so they know of only 23 breakthrough cases. From this small cohort, a mere 6 individuals had detectable anti-N antibodies. They compare this to 663 people with anti-N antibodies from 812 infections in the unvaccinated.

In the very same PHE report, we find an updated version of what is becoming the world’s most disturbing graph. Infections in the vaccinated continue to outpace infections in the unvaccinated by ever greater amounts, and it’s just no longer credible to claim that this is a statistical error: 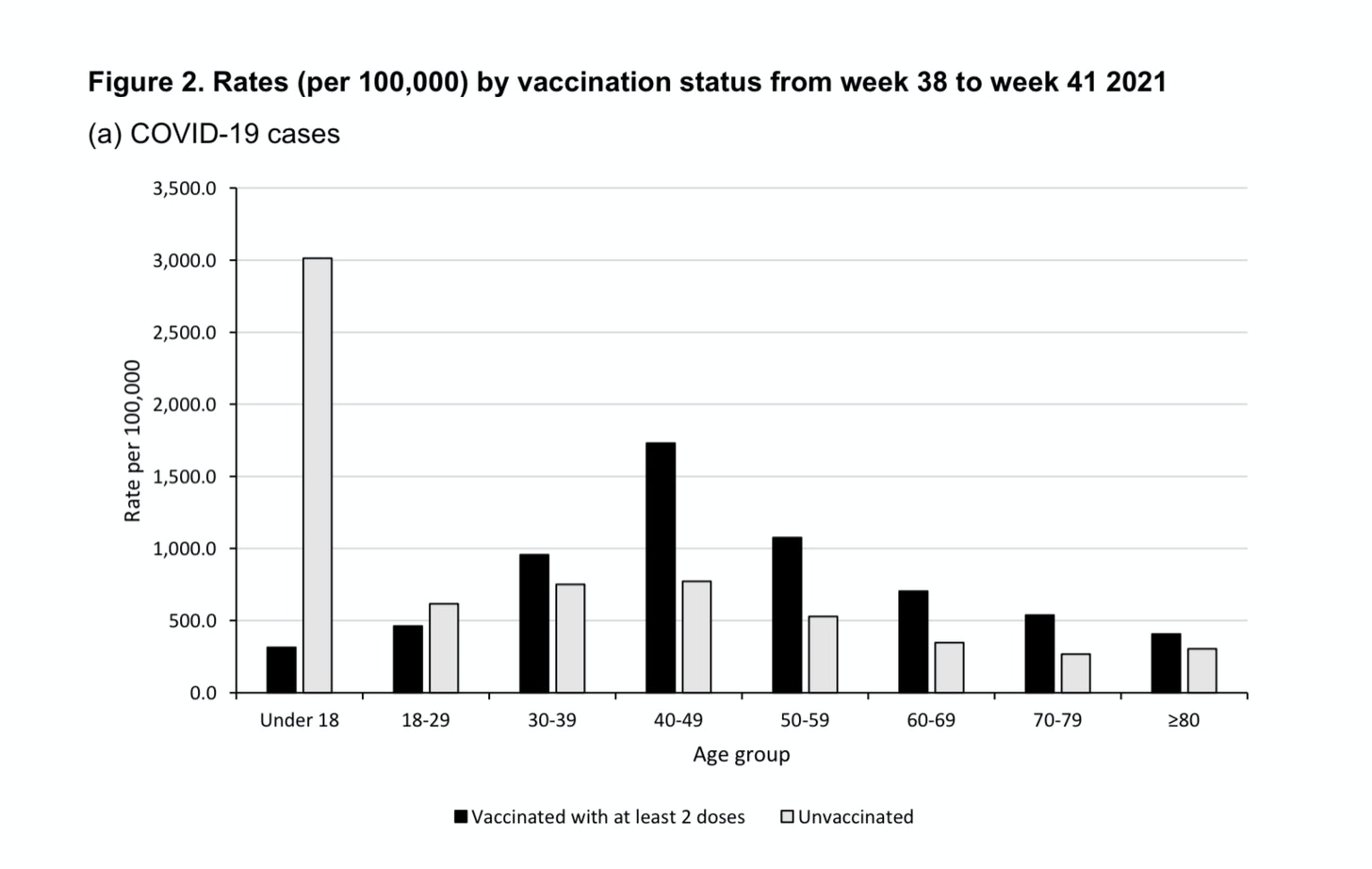 The universal vaccination campaign has coincided with a marked increase in the volatility of Corona and vast changes to regional and temporal patterns of infection. For the first time, SARS-2 has departed from the seasonality observed by other human coronaviruses. Official discourse has laid all of this at the feet of the Delta variant, but it is very doubtful even the scientists and bureaucrats responsible for this line really believe it. Mass vaccination has drastically altered the environment in which SARS-2 circulates. This was always expected to change the behaviour of the virus – just not in this precise way. In return for only limited protection against severe outcomes, the vaccines appear to encourage the spread of SARS-2, in multiple different ways. In continuing to insist on mass vaccination, our public health bureaucrats are doing the bidding of the virus. There is no other way to look at it.

UPDATE: CJPaul in comments: “I think you should look at Figure 3 instead of Figure 5 from the UKHSA 42 week report. Note the S and N levels are the same at time of vax campaign starting.” 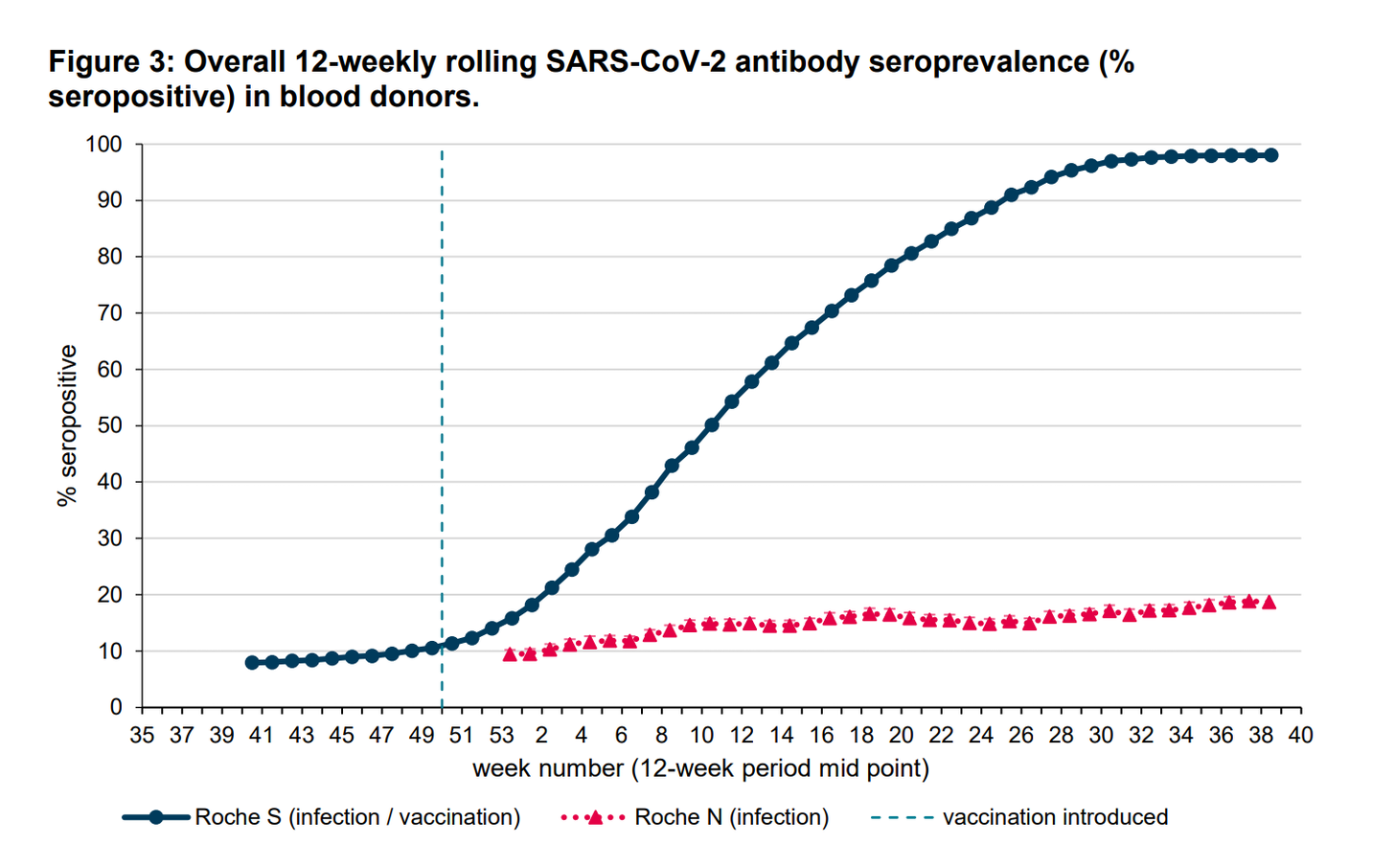