Maximum Vaccination
The vaccines can't control Corona, which is why they won't stop vaccinating

Corona is primarily dangerous to the very old and the already sick. Occasionally, it is true, somebody who is younger or not already sick ends up dying. This happens with influenza and other viruses too. While that’s regrettable, Corona is not the leading cause of tragedies like these, and on balance they are too rare to pose an overarching unprecedented global threat to our hospitals, to our public health, to our nursing homes, or to whatever it is we’re supposed to be worried about right now. Given the stratified nature of Corona risk, the majority of the gains to be had from stimulating SARS-2 antibodies are concentrated in around 10-15% of the population. This is true whatever you believe about the vaccines, their safety or their efficacy.

If you want to lower hospitalisations and deaths, in other words, the difference between vaccinating 40% of your population and 80% of your population is not nearly as great as it seems. In fact, as you move to ever lower-risk cohorts, the volume of vaccinations required to reduce deaths grows in inverse proportion to the deaths you are reducing. This is the phenomenon of diminishing returns. It means that if you have vaccinated all the olds and sicks and an additional 50% or 70% of everyone, AND you are still suffering from a raging pandemic of the unvaccinated, there are probably not enough immunologically naive people left to give you a hope of vaccinating your way out.

The unspeakable truth is that the vaccines don’t suppress case rates at all. We have long known that their efficacy against infection fades to zero after week 20, but even at the high point — the first month after dose 2 — the protection is sure to be vastly overstated. This would be why even academic journals are starting to run pieces with titles like “Increases in COVID-19 are unrelated to levels of vaccination across 68 countries and 2947 counties in the United States”: 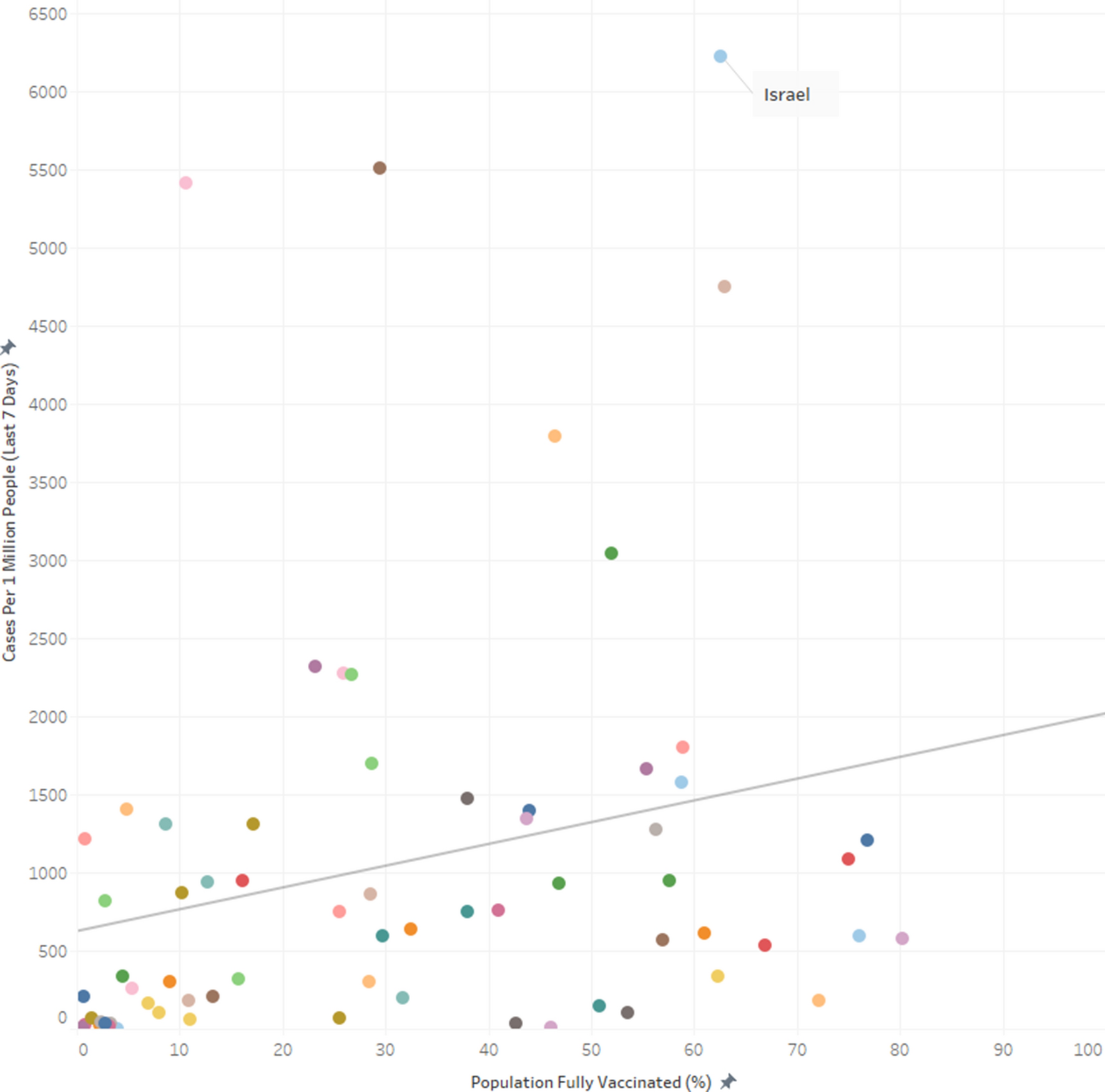 Unsurprisingly, the authors find that the same is true of US county-level data as well:

So high rates of vaccination can’t reduce infections, and vaccinating the oldest and sickest hasn’t done very much for overall hospitalisations and deaths either. Yet our governments press on, not because the vaccines are working, but because they’re not. We’ve been through all of this before. Last year, large swathes of the developed world banned most of public life because everyone decided that this was the way to save lives. Wuhan convinced them that lockdowns work, in much the same way as the Pfizer/BioNTech trials convinced them that vaccines work. Except lockdowns didn’t work, and vaccines don’t really work either. Corona rages on, indifferent to the strange learned fantasies of our medical bureaucrats.

A consequence of these failures is raging cognitive dissonance among the elite, and a substitution of the means for the end. Last year, it was locking down itself that became the highest policy goal. Governments schemed less about how to get cases down, than about how to reduce the Google-certified mobility of their citizenry by margins great enough to satisfy their court astrologers. The same is now true of the vaccines, which in their failure to do much about anything, have become the focus of nearly all Corona policy everywhere in the world. All that our governments want to do now is vaccinate more and harder. They want to vaccinate all of the unvaccinated, and when that grows tiresome they will want to triple and quadruple vaccinate the already-vaccinated. And they especially want to vaccinate that last demographic that has so far remained largely exempt from vaccination, namely children.

This would be little more than a global comedy at the expense of our worthless public health establishments, if we did not have abundant evidence that the vaccines are more dangerous than is normal for vaccines; and if SARS-2 did not pose such an infinitesimal risk to children, as to make even totally safe, ordinary vaccines an unacceptable measure in this context.

A beloved argument for vaccinating kids despite allegedly rare disturbing side effects, like myocarditis, is that these are also rare complications of Corona infection. Indeed, we are told that Corona is more likely to cause myocarditis than the vaccines. The truth of course is that we don’t know the true rate of Corona-induced myocarditis in children, because most of infections go unnoticed. Beyond that, after the brief, 20-week window of protection against infection expires, vaccinated children will contract Corona at the same rate as unvaccinated children, and so the real question for Team Vaccine is simply this: Do the vaccines reduce the already near-zero longer-term myocarditis risk from Corona infection in children enough to compensate for the risk of myocarditis that they add?

This question is not likely to have an encouraging answer, but that will not stop mass child vaccination, to secure what will surely be the most diminished of all our diminishing returns so far. The only rationale necessary for vaccinating every last living organism is the same as the only rationale necessary for locking down all of human society: The disease statistics are not improving, and the only thing to do when they are not improving, is more of the thing that you sold to everyone beforehand, on basically no evidence, as the sole solution.

We have entered the world of Maximum Vaccination. Our best hope is that the farce of Corona suppression completes its self-discrediting arc before it can do much more damage.