From the original article on May 2, 2022, by Stone Age Herbalist.

Welcome to the April edition of my monthly archaeology round-up, breaking down the most interesting papers of the month for you. Many were missed out unfortunately: Lapita Expansion, new Temple of Zeus, Neanderthal climate adaptations and so on. But hopefully this is a broad and illustrative set of papers. Any feedback on content very welcome, this is still a project in its infancy.

April 1: Mobility on the Baltic Coast - Mesolithic to the Bronze Age

Isotope studies sometimes seem outdated in the era of genomics, but they still have a vital role in exploring mobility during a person’s lifetime. This study looked at strontium isotopes, an element which is incorporated into human teeth and bone from their diet. A mismatch of the isotope ratios from the surrounding ecology to the person indicates they were born and raised elsewhere. Given the new data for steppe invasions and migrations during the Bronze age, the authors were interested in assessing migration patterns from the late Mesolithic to the Bronze age in the southeastern Baltic, an area with less research coverage.

40 humans were assessed, mainly from inland Lithuanian Mesolithic-Neolithic cemeteries. Mobility in general across all time periods was high, as expected for semi-nomadic people, migration of around 85km inland from the coast was standard. Between 25-50% of all people at all times died somewhere other than their birth region. Interestingly mobility did not decrease when pottery arrived into the forager societies on the Baltic coast, but slowly decreased with sedentary and increasingly intensive forms of agriculture.

Another one of these great papers where genetics confirms ancient texts and understandings. The Avars, who arrived in the Carpathian Basin from the Central Eurasian steppes in AD 567–568 were understood by the Byzantines as survivors of the Mongolian Rouran Empire, destroyed by the Turks in AD 550. However, this has been disputed for centuries, but genetic evidence in the form of over 60 pre-Avar and Avar human remains confirms the original story, with some interesting extra details. 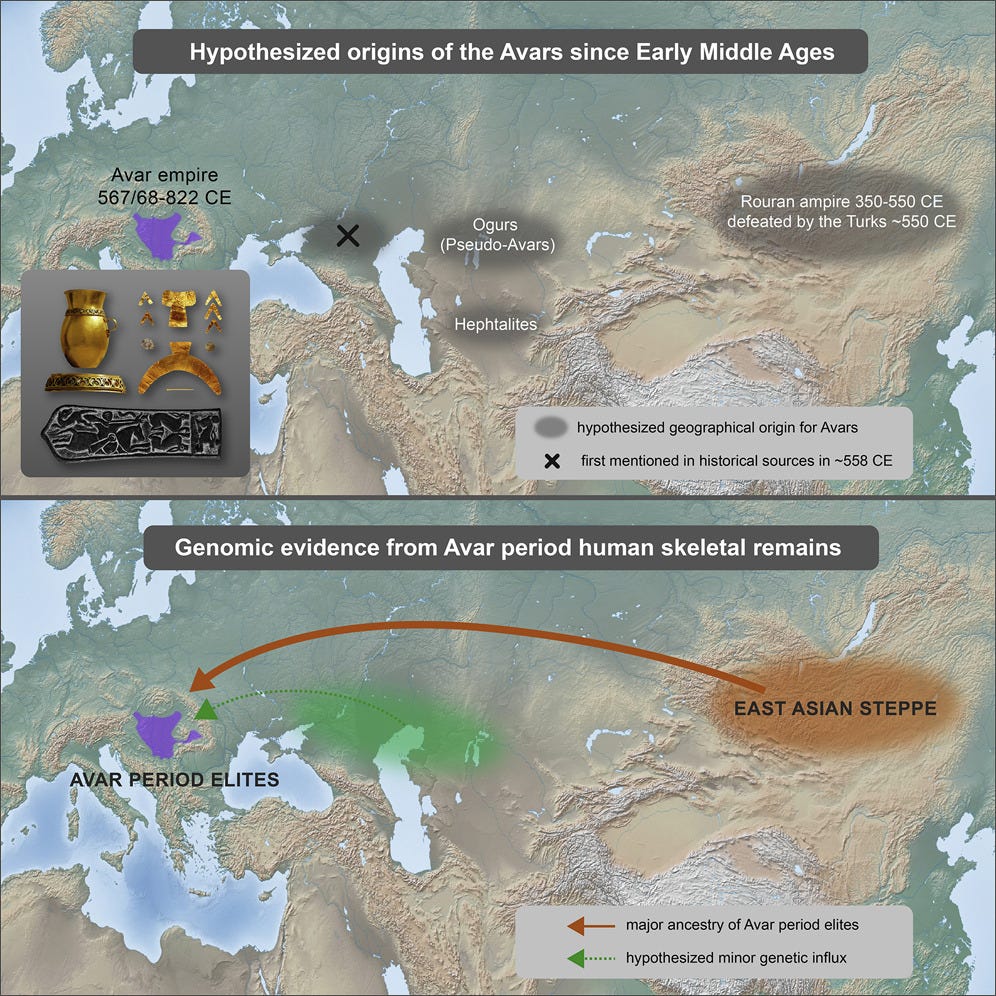 The results definitely support the case for rapid long-distance migration of Avar elites:

“These individuals carried Northeast Asian ancestry matching the profile of preceding Mongolian Steppe populations, particularly a genome available from the Rouran period. Some of the later elite individuals carried an additional non-local ancestry component broadly matching the steppe, which could point to a later migration or reflect greater genetic diversity within the initial migrant population.”

Mixed new from Australia this month. After decades of debate and controversy, the invaluable Lake Mungo fossils are now set to be secretly buried, never to be reanalysed, a move which is both depressing and enraging for anyone interested in Australia’s prehistory. I wrote an article about the Lake Mungo fossils and their history you might find interesting for some more back story.

Meanwhile, the mining company Rio Tinto funded an excavation of an Aboriginal site at Yirra in Pilbara, northwestern Australia. The charcoal and other organic remains uncovered dated the site to at least 50kya, which places it amongst the oldest known sites in the country. Perhaps one to keep an eye on to see what else might emerge from the excavations.

Papers which can successfully integrate climatological, geological and archaeological data can tell incredible stories from the past. Here we have a fascinating paper which uncovers a devastating Mw ~9.5 earthquake and subsequent tsunami, one which destroyed life on the coast for foragers 3800 years ago and altered their way of life.

Matching the chronology of a geological event with ephemeral human activities like campfires is exceptionally difficult, let alone describing the long term impact on those people’s lives. Add into the mix the rise in sea levels, shifting tectonic plates and coastal erosion and you need to be exceptionally thorough and precise to make a watertight case. Thankfully very good radiocarbon dating and meticulous excavation work made this possible.

Normally the sediment between stones on an archaeological site would be overlooked or at least considered a low priority. Here the researchers were able to carefully demonstrate that a site was actually destroyed by the tsunami itself, showing that the sediment came from the backwash of the water. Kudos to the team for being so rigorous and being able to tell such a fascinating story.

The issue of health among early farmers has become more widespread in recent years, but this study attempts something new. Taking 167 bodies from across European prehistory, ranging from the Upper Palaeolithic to the Iron Age, the researchers not only set out to compare heights, but to compare them to their expected heights based on their genetic profiles.

This is an interesting way to approach the issue, because it could be the case that incoming Anatolian (Early European Farmers) farmers were simply shorter people, even with a perfect diet. But the study shows that the Neolithic populations were shorter on average, but shorter than their expected heights, meaning that nutritional deficiency, parasite load and other adverse health issues affected their overall growth patterns as a people.

However, they were keen to stress that such genetic predictions have their limitations, and improved matching between the genotype and phenotype may change these results:

“Therefore, for multiple reasons, our primary analytical approach might incompletely capture the stature-relevant effects of any genetic ancestry variation across our sample. That is, with respect to our hypotheses, we could only be partially accounting for any cultural period-confounded migration/gene flow among populations with different genetic height profiles. For example, gene flow as a result of the spreading of the Yamnaya/Corded Ware cultures (“steppe ancestries”) starting ∼4,000 to 5,000 y ago may have been associated with the introduction of relatively greater proportions of “tall” alleles into various regions of Europe”

April 7: The Prehistoric Peopling of Eurasia

This paper is an important contribution to a massive hole in our general prehistoric narrative. The consensus amongst most archaeologists is that a population of Homo sapiens left Africa around 60-70kya, but the major division between East and West Eurasian peoples is estimated to have taken place around 45kya. This gives us millennia in which this exiting group of humans seemed trapped between Africa and wider Eurasia, interbreeding with Neanderthals but generally static.

The researchers make a stab at building some models for how this population may have expanded and contracted from what they dub the ‘Hub’, meaning this reservoir of people who left Africa and lived around today’s Middle East. They do this by creating genetic relationships between the earliest known fossils - such as Ust’Ishim, Tianyuan and Bacho Kiro - the results of which show differing waves with some local extinctions. Overall: A useful paper with an extensive reference list.

An interesting excavation was reported from the Haydarpasa Train Station in Istanbul’s Kadikoy district. A Hellenistic tomb has been uncovered, the only major find of its type. Additionally it appears to be a cremation burial, which is unprecedented:

“According to the preliminary analysis, the body was cremated inside the tomb, but the skeleton and other remains survived the blaze and have now been unearthed, Asal explained. He said a terracotta goblet and a perfume bottle, both of them with visible marks of fire damage, were found with the skeletal remains.

“I have never seen this type of a cremation tomb from the Hellenistic period … Perhaps this will give us many more valuable insights,” he added.

From the Economics Depts of Warwick and Jerusalem Universities comes this curious paper. Based in part on a hypothesis laid down by anthropologist James C Scott, the researchers take the long view of an enormous question - “what is the origin of the state”. The methodology used is almost the exact opposite approach of an archaeologist, intensely mathematical. Looking at Scott’s idea that the state arises not so much from a simple excess of calories, but specifically a form of calories which are storable, portable, divisible and taxable - in other words, cereal grains - the economists attempt to test this claim through archaeological and historical data sets. They bolster this through several case studies. Verdict: Interesting, many good references to chase, not persuasive.

Finally - an unusual study of historical bioarchaeology - over 270 human remains from a 19th century Dutch Protestant dairy farming community in Beemster were subjected to nitrogen and carbon isotope analysis. The results showed that youngsters were not breast fed as a standard practice, but rather were fed dairy milk from a very young age. This is an interesting result, since contemporary communities did breast feed their children, suggesting a major cultural factor or set of factors which discouraged the practice. Good to see both bioarchaeology being used in more historical studies, and also developing robust techniques for assessing infant diets.