From the original article on September 1, 2022, by Stone Age Herbalist.

Among this month’s offerings are grisly Mayan rubber technology, Chinese metallurgy, Bronze Age plagues, a Jewish massacre, the Bantu Expansion and Aboriginal boomerangs. Probably the biggest publication this month, the ‘Southern Arc’ papers concerning the genetic findings of a recent Indo-European study, will be dealt with in a separate article.

At the Mayan site of Tonina in Chiapas, Mexico, over 400 vessels were uncovered at the Temple of the Sun during a 2020 excavation. The vessels contained human ash and bone, rubber, charcoal and plant remains. A researcher from the National Institute of Anthropology and History, Juan Yadeun Angulo, has speculated that these indicate the method the rubber production during the Mayan period relied on the sulphur from human remains. Rubber vulcanisation as it is known, makes use of the sulphur-sulphur bond to crosslink chains of rubber polymers, forming a hardened and solid material which retains its elasticity. The hypothesis has been welcomed cautiously, particularly since Angulo’s main evidence comes from the cremated remains of several elites, which other archaeologists deem unlikely candidates for the process. The final product, the famous rubber balls, would have been used in the ceremonial ball games common to many Central American civilisations.

The Bantu Expansion remains one of the most enigmatic periods of African prehistory, but a new paper from the Max Planck Institute has possibly refuted one of the standard models. Around 4000 years ago, Bantu speakers expanded from their homeland in the Guinea Gulf to occupy most of Sub-Sahara Africa. Earlier thoughts about how agriculturalists traversed the central rainforests have relied on the ‘Holocene Rainforest Crisis’ (3000-2500ya), which opened a savanna corridor, theoretically allowing farming populations to move into previously inaccessible areas. This approach took a ‘break-away’ model, where each new group split and one left, rather than a diffusion approach, and was able to model the spread of the Expansion linguistically.

Combining linguistics, ecology and genetics, the researchers posit that the expanding Bantu farmers did indeed enter the dense rainforest, switching from millet production to a patchwork of palm oil, cowpeas and yams. This suggests that Bantu agriculture was flexible and able to adapt to entirely new ecosystems, possibly relying on Pygmy hunter-gatherers for meat and honey. While some academics seem to deny the Bantu Expansion ever took place, research continues to uncover exactly how and when this enormous language family was able to colonise Sub-Saharan Africa. 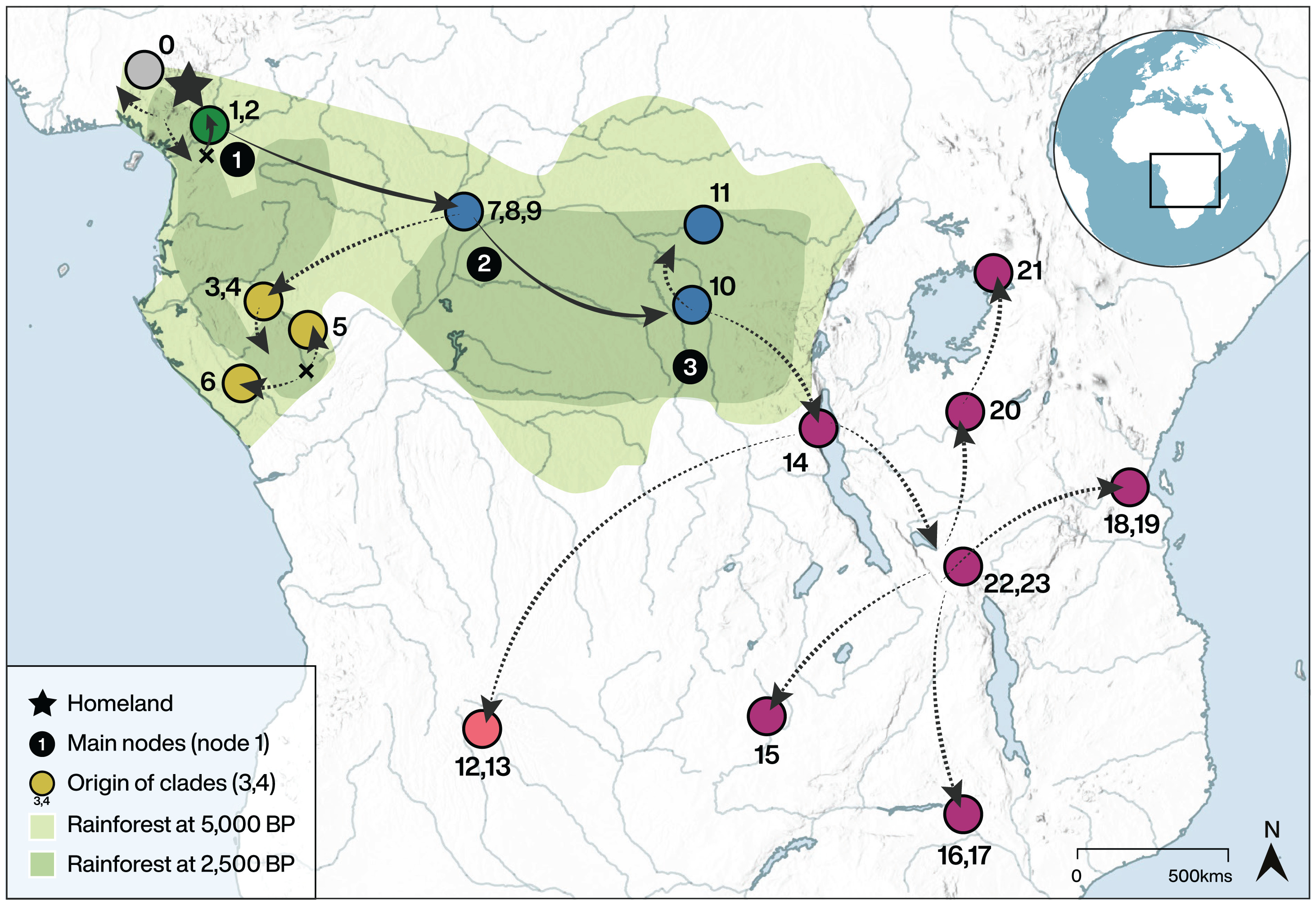 Plagues During The Bronze Age Collapse

Unsurprisingly there has been an uptick of studies focusing on the role of plagues and diseases in the ancient world. With methods for extracting preserved pathogens from human remains becoming ever more sophisticated, there is now a rush to reexamine skeletons to study any potential bacteria that may still be viable for examination. In this study 68 teeth from 32 individuals buried in Hagios Charalambos cave, Crete, had their DNA tested. The remains dated to between 2290 - 1909 BC and revealed sequences of two pathogens - Yersinia pestis and Salmonella enterica - the plague and typhoid fever. The human DNA revealed no trace of Steppe ancestry, previously linked to outbreaks of plague, but rather the expected Anatolian Neolithic/Copper Age ancestry.

The strains of disease discovered have no modern equivalents, and the exact mechanism of transmission for both are unknown. The Y. pestis bacterium was possibly not adapted to the flea at this point, raising the possibility of respiratory or some other vector. Given the existence of wide ranging trade networks across the eastern Mediterranean at this time, it is conceivable that the diseases spread from the Eurasian steppe via intermediary traders. This time period saw the general collapse of multiple civilisations, including Egypt’s Old Kingdom and the Akkadian Empire in Mesopotamia. Theories continue to swirl about why this happened, but this is one of the first pieces of empirical evidence to suggest the partial role of disease in weakening populations.

Two updates from China related to bronze production - the first was the uncovering of this huge 150 kg mythical animal at the famous site of Sanxingdui, which continues to produce astonishing metal figurines and objects.

The second was a paper published in Cambridge University Press, which outlined a major breakthrough in understanding how ancient China metallurgy was practised. Researchers painstakingly combed through the Kaogong ji, a 2,300-year-old Chinese text outlining the production of different metal artefacts, and discovered two terms - Jin and Xi, which appear to be ingredients in bronze manufacturing. The researchers tested a number of Chinese coins and posited that the terms referred to pre-prepared alloy mixtures of copper, tin and lead, in various ratios. This provides scholars with a testable hypothesis about the invention and spread of bronze metallurgic technology in China. 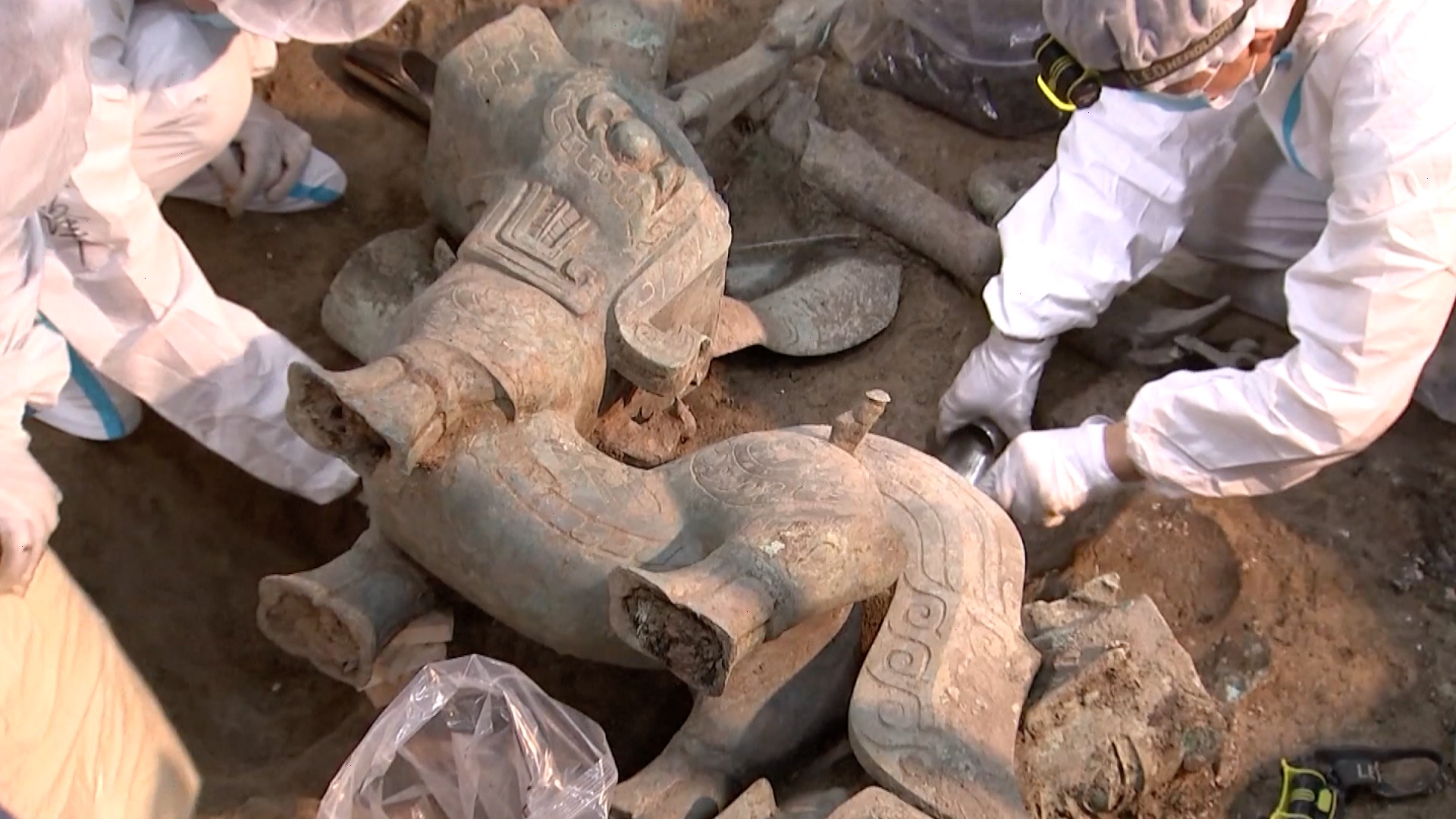 A traditional problem in archaeological artefact studies is trying to link the function of an object to its shape or structure. In prehistoric studies the use of microwear or usewear analysis has been employed to assess microscopic damage to the edges of tools in order to test claims of function. Boomerangs seem to be one of those cut-and-dry objects, used for throwing and hunting. But a pilot experimental study confirmed that boomerangs could be used for small ‘retouch’ work on knapped lithic flakes, something documented in the ethnographic literature but rarely investigated.

The importance of studies like these goes beyond the immediate value to Australian archaeology, but highlights how researchers easily overlook the function and use of an object due to its presentation. Many mysterious prehistoric artefacts exist and are labelled with little to no confirmatory studies. Boomerangs are also documented elsewhere in the record, with the earliest dated to around 23,000 ya from Poland, made from mammoth tusk.

While not especially shiny or newsworthy, applications of the archaeological genetic revolution continue to flow. In 2012 the Polish Genetic Database of Victims of Totalitarianisms was created by the Pomeranian Medical University in Szczecin and the Institute of National Remembrance-Commission for Prosecution of Crimes against the Polish Nation. This has aimed to employ archaeological and forensic genetic science to extract, store and identify victims of both Nazism and Communism. With many family members still alive, it has been possible to prove who many victims were and return them to their loved ones.

This month three victims from a Stalin-era mass grave in Georgia were identified, a first for the nation. The remains of 27 victims murdered in 1937 were found in a monastery near Batumi and their DNA extracted by scientists. Despite the complexity of testing large Georgian families, three were able to be positively identified, highlighting the other possibilities for modern genetic research.

Herpes May Have Originated In Eurasia

Returning to Bronze Age diseases - the modern herpes simplex virus (HSV-1) infects a majority of adults today, but up until 2016 the oldest documented genome only dated back to a New Yorker in 1925. This paper challenges the previous assumption that HSV-1 emerged with the dawn of our species in Africa, and instead points to an explosion at the end of the Eurasian Neolithic and beginnings of the Bronze Age around 5000 ya.

Research has shown that there were migration(s) from the Eastern European steppe region into the rest of Europe (44) and likely an increase in population density (45) during the Bronze Age. The primary mode of HSV-1 transmission is vertical, from parent to child; however, the addition of lateral transmission as population density increased during the Bronze Age, potentially linked to the introduction of new cultural practices such as the advent of sexual-romantic kissing, may have contributed to a shift in the dominant lineages, which have continued to circulate to this day.

Curiously the authors link the spread of the disease the kissing, which they tentatively claim was ‘invented’, or culturally popularised, during the Eurasian Bronze Age. They even cite early bans on kissing with reference to disease control: “Three hundred years later, the Emperor Tiberius is said to have tried to ban kissing at official functions in an effort to stop the spread of disease (unclear whether the disease was herpes)”

An unprecedented excavation in Crișana, Romania, revealed the grave of an extremely wealthy woman, dated to around 4500-4000 BC. Her grave goods included an ornate copper bracelet, 800 mother-of-pearl beads and an astonishing 169 gold rings. This much gold in a single grave is unique and represents more gold than has been discovered in the entire Carpathian Basin. The researchers have inferred she belonged to the Tiszapolgár culture, a copper age continuation of the Neolithic Tisza culture. Exactly who she was and how she fitted into the wider political culture of the region is unclear, but her status must have warranted the enormous amount of treasure she went to her grave with. 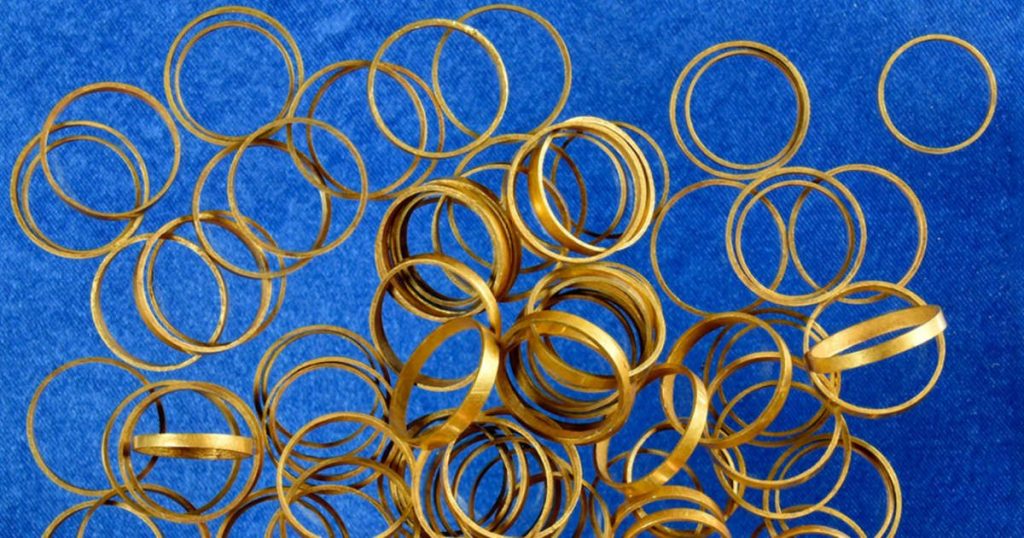 A 2004 construction excavation in Norwich revealed a medieval well containing the remains of at least 17 people, dated to between the 11th-12th centuries AD. The bones have been subject to several genetic analyses, which showed that they are a very close match for modern Ashkenazi populations. Six possessed the mitochondrial haplogroup H5c2, and paternal haplogroups included J1a2a1a2d2b2a2b, E1b1b1b2a1b1a and T1a1a.

Uniparental haplogroup calls for all Chapelfield individuals also support genetic affinities to the Near East and in some cases to Ashkenazi Jewish populations. Specifically, Ashkenazi Jews form the majority of modern carriers for mitochondrial haplogroup H5c2

Alongside these results were alleles indicating that one individual had red hair and that three were sisters. One was the result of a first-order incestuous union, to put it diplomatically, and two more were also the product of second-degree parents. The researchers were also surprised by the number of alleles indicating hereditary diseases associated with modern Ashkenazi populations, which suggests that a bottleneck event was earlier than expected.

The discovery of these remains has been linked in the paper with an outbreak of anti-Semitic violence which was documented in Norwich in 1190 and the bodies being discovered down a well strongly suggests they were killed and discarded. The existence of red hair amongst the group indicates that medieval tropes about Jews having red hair was based on observation. Overall the paper shows how modern genetic methods make it possible to confirm medieval sources and that English Jews suffered from hereditary diseases much earlier than previously believed.