From the original article on January 6, 2023, by Stone Age Herbalist.

December saw a good mix of discoveries, ranging from ancestral fire production to medieval diseases, from Hunnic raids to Palaeolithic bear skins. As usual I’ve tried to combine a good blend of methodologies and time periods, looking at metagenomics, pottery analysis, climate data and tool typology. I did want to include the recent LiDAR discoveries in central America, but there have been so many recent Mayan finds that I might try to incorporate them into some kind of special edition to make sense of things.

Adding to my recent article on the origins of fire and metallurgy, this month we saw the startling announcement that Homo naledi may have been using fire around 300,000 years ago in an underground cave - South Africa’s Rising Star cave complex. For people not familiar with this particular hominin species, Homo naledi was a small ancestral human, related to Homo sapiens and the archaic Austrolepithecus. They would have stood around 4ft 9inches (143cm) off the ground and their brain volume was about a third of ours. This has always proved a controversial point within archaeology, with some people arguing that brain size is clearly not correlated to cognitive complexity. The presence of deliberate hearths and apparently organised burials within the Star cave points towards this hypothesis being true.

However, this was an announcement at a conference in December, rather than a publication. So we need to wait on more detailed evidence before accepting the claim.

Ancient DNA analysis for humans and animals has obviously changed the game in archaeology, but less well known is a similar revolution in extracting ancient pathogens from these remains. Known as metagenomics, the researchers bulk sample all the available DNA material and combine the fragments digitally to piece together the various microbes present. In this study from a community cemetary in Lauchheim Mittelhofen, 70 individuals were screened for pathogens. Dating to between the fifth and eighth centuries AD, the individuals had their teeth and bones analysed, yielding a number of diseases including: hepatitis B virus (HBV), parvovirus B19, variola virus (smallpox), and Mycobacterium leprae (leprosy). These were present in over 30% of all the people, seven people had two viruses and one person had hepatitis B, parvovirus and leprosy!

Interestingly, 95.5% of the pathogen-positive individuals and 84.4% of the individuals with no molecular sign of infection exhibited skeletal lesions suggestive of physiological stress. This extremely high burden of lesions indicates poor health in Lauchheim. In one scenario, malnutrition could have increased the level of physiological stress, which in turn resulted in a weakened immune system and a higher probability of successful pathogen transmission and zoonoses. In another scenario, a high burden of infectious diseases in the community compromised the immune system leading to increased physiological stress and metabolic disturbances.

Such horrifyingly poor health has been correlated with famine in particular, and the authors make the case that a climatic downturn during the time period - the Late Antique Little Ice Age - was likely the driver of crop failure and thus led to a weakening of the general immune system in Lauchheim.

The subject of prehistoric clothing becomes controversial before the emergence of ‘anatomically-modern humans’, in large part because needles are very rare prior to the Upper Palaeolithic. A number of proxies have been suggested to try and mark out a date when humans were known to be making clothes, including the evolution of the human body louse (170,000 years ago), the presence of fur-bearing species amongst animal remains on sites, and specific tools for producing clothes and textiles - needles, lissoirs and so on.

The debate over whether Neanderthals and other older hominins wore clothes continues to rage on, but this new paper provides some strong clues that older Palaeolithic humans were skinning and possibly wearing bear skins. The publication looks at the immensely important site of Schöningen, a wide ranging excavation area which has turned up some remarkable findings due to great preservation, particularly note-worthy for the fire-hardened wooden spears which date back around 330,000 years. Amongst the many animal bones of Schöningen 12 II-1 and 12 B there was found a number of bear remains, both of the Cave Bear and the Asiatic Black Bear. Cut marks across the fingers and small bones of the bears matches the results seen from intentionally skinning the animal, rather than butchering it for meat. This indicates that the humans living in the area were hunting and killing bears, then carefully removing the hide from the carcass. There are many uses for a bear skin, but given their relative scarcity as prey and thick winter fur, it stands to reason that the skins were used for clothing and/or bedding.

One can argue that this is unfair inference, but unfortunately, even with the best preservation in the world, the time depth of over 300,000 years really closes the door on many archaeological techniques used for later time periods. As it stands, I think the paper is balanced and reasonable and humans were likely skinning bears for their hides.

Why Eurasian Hunter-Gatherers Made Pottery

One of the classic facts taught to students of archaeology over the past century has been the equation of pottery with the Agricultural Revolution and the Neolithic. Pottery, it was believed, arrived in Europe with the new farmers from Anatolia, in a package containing domesticated crops and animals, polished stone tools and a new cosmology. In fact, we’ve learnt that ceramics first appeared somewhere between Russia, China and Japan during the Upper Palaeolithic. The technology then slowly spread, across the steppe, the taiga, down the Eurasian river systems, until it petered out somewhere around northen Europe just as the Neolithic farmers were appearing on the edge of the Mesolithic world.

So far so good, but how did this technology spread? We’ve seen many examples in the past few years where the ‘pots are not people’ mantra has been challenged and the role of technological ‘diffusion’ taking a back seat in interpretation. However, given the very slow movement of pottery from East Asia to northern Europe, perhaps 10,000 years, it does seem we are looking at a case of diffusion. This new paper collates a vast amount of data on Mesolithic pottery - 1226 vessels - and tries to model different variables to make sense of how and why pottery spread amongst hunter-gatherers in different ecosystems. A long-standing hypothesis that forager pottery was closely linked to fishing and storing/producing aquatic foods and oils is dismissed by the authors, who find no correlation between the spread of pottery and what it was used for. The data in fact matches another hypothesis, that pottery production was a female craft, and steady patrilocal marriages between different forager groups introduced the technology into neighbouring peoples. The newcomers would then introduce the art of ceramic making, which would be adapted to their purposes, before later generations of women married out to non-pottery groups.

Overall this is something of a landmark paper for this topic, putting to bed an older theory and leaving us with new challenges to make sense of how and why pottery spread, and why some groups made use of ceramics and some seemed to refuse them. 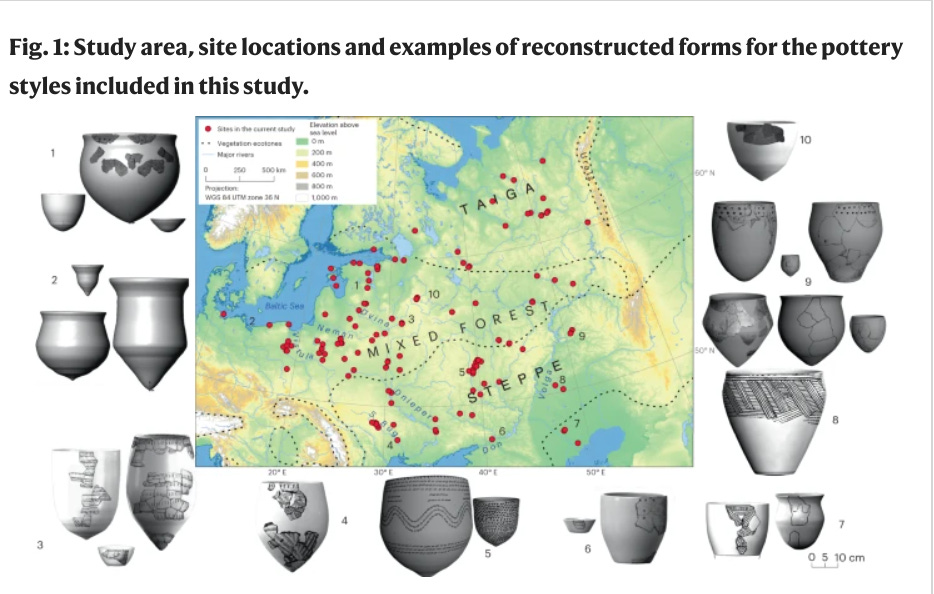 Did Drought Lead To The Hunnic Invasions Of Rome?

One of the more popular areas of study today are the effects of disease and climate change throughout human history. In an interesting paper from the Journal of Roman Archaeology, the authors argue that severe drought in the Carpathian Basin region during the 430s-450s AD essentially forced the Huns to engage in violent raiding against the Roman frontier. They make this argument by assessing tree ring data from Hungary, which shows biochemical signals for water shortages. Combined with other data from bone isotopes and known environmental data around the Danube, the paper argues that water shortages pushed the Huns towards aggressive activity, to open up space for pasture and to access food and water. As the authors state:

“Tree ring data gives us an amazing opportunity to link climatic conditions to human activity on a year-by-year basis. We found that periods of drought recorded in biochemical signals in tree-rings coincided with an intensification of raiding activity in the region… If resource scarcity became too extreme, settled populations may have been forced to move, diversify their subsistence practices and switch between farming and mobile animal herding. These could have been important insurance strategies during a climatic downturn… Climate-induced economic disruption may have required Attila and others of high rank to extract gold from the Roman provinces to keep war bands and maintain inter-elite loyalties. Former horse-riding animal herders appear to have become raiders”

These types of papers are obviously interesting because they provide a counter-balance to the historical narrative, which in this case would not have been friendly or sympathetic to the Huns. But they also risk overstating the economic motivations for human activity, or placing other motivations such as ideology, power, glory, fame and so on, in a secondary role, which can easily become a very Marxist materialist view on human history.

The paper is worth reading though, and the authors have an interesting section on the connections between the infamous Xiongnu and the Hunnic peoples of the steppe.

The Oldest Stone Tools In The Americas?

Dating the peopling of the Americas is one of the most important outstanding questions in archaeology, and attracts much more public attention than other prehistoric problems. Evidence for pre-Clovis technology and/or settlements runs the spectrum from rumour to speculative, but this new paper seems to have securely dated a number of stone tools to around 16,000 years ago, at a site called Cooper’s Ferry in the lower Salmon River of western Idaho. This alone is very interesting, since the dates align with the known Cordillerian Ice Sheet, which would have blocked an overland route into North America. But added to this was the typological study of the tools, which match an Upper Palaeolithic culture in Japan between 32-20,000 years ago, known as the ‘late upper Paleolithic (LUP) bifacial point tradition’. These are different tools to the later Jomon Culture, which suggests the ancestors of the people at Cooper’s Ferry may have descended from groups around Japan, before the later Jomon people arrived.

Dental and DNA evidence that indicate that Holocene-aged Jomon populations could not be the ancestors of the First Americans (26) may thus be correct but is largely irrelevant. We hypothesize that this shared similarity in pre-Jomon stemmed point technology may point to the general location along the northwest Pacific Rim from which some of the earliest peoples in the Americas may have originated between ~22,000 and 16,000 years ago (27, 28). 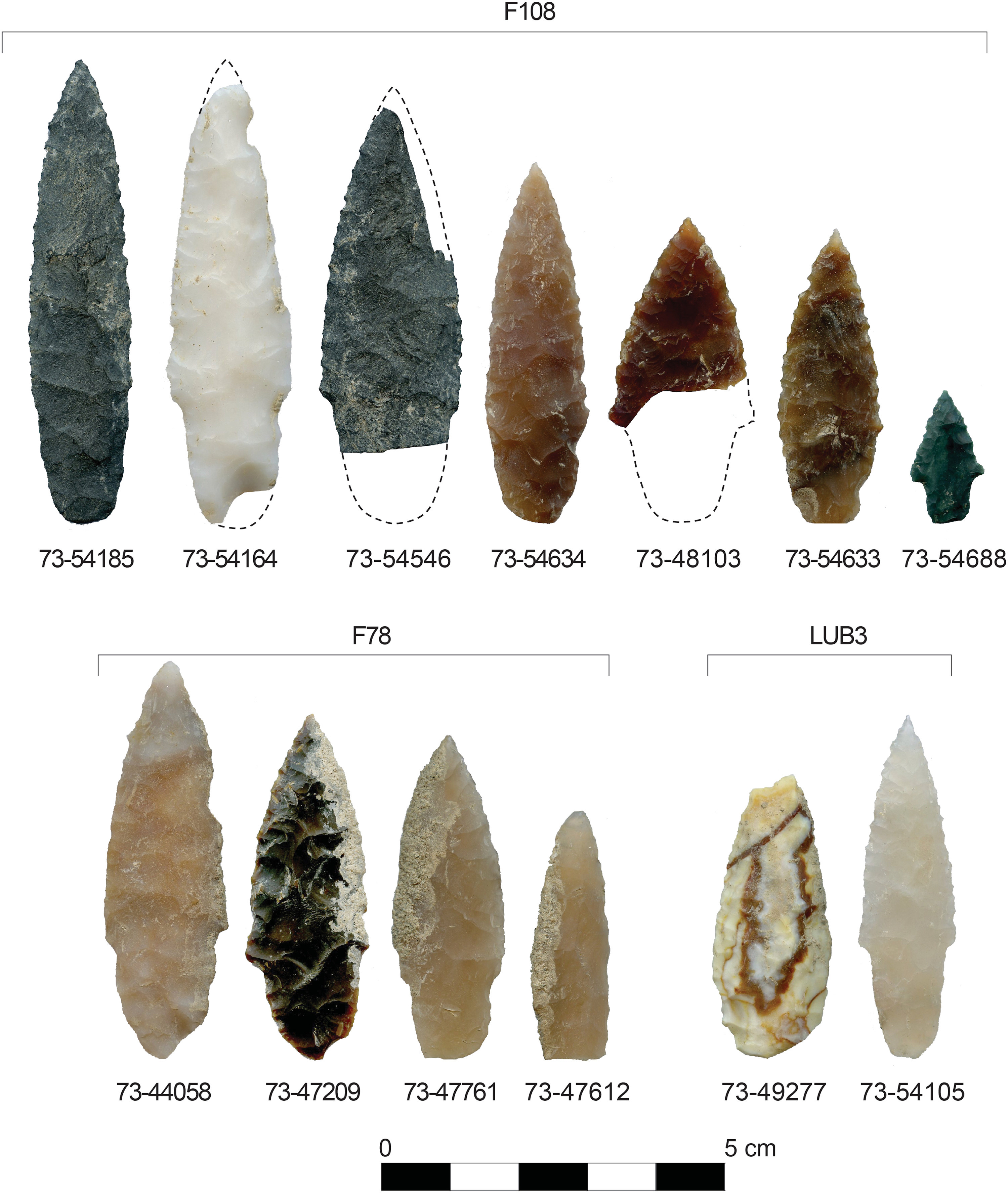