From the original article on August 3, 2022, by Stone Age Herbalist.

The summer months are traditionally excavation season, so news of finds and discoveries are dominating the headlines, including lost cities, fossils and shipwrecks. Behind this are the increasingly complex and multidisciplinary papers covering genetics, climate science and statistical modelling. The biggest paper of the month was the new ‘evolution of lactase persistence’ research, which I have discussed in another post. But there is plenty here to get your teeth into, from Micronesian DNA to the riddle of the Red Deer Cave People, perhaps finally solved for good? Rounding out the list is a surprising Roman era mega-tsunami in Spain.

The Roman historian Livy described a battle for the city of Bassania when Rome fought to conquer the region against King Gentius. Bassania’s existence and location has been something of a mystery, with archaeologists previously identifying it with the modern village of Pedhanë. In 2018 excavations near the village of Bushat came across huge, 3m thick walls and two gates, along with ruined buildings. The site, measuring nearly 30 acres, seems a more likely candidate for Bassania. Further excavations reported this month uncovered the foundations of two ‘extensive buildings’, along with ceramic fragments. The pottery turned out to be miniature amphorae and skyphoi, which could either be simple child’s toys or cultic objects, according to the research leader Professor Piotr Dyczek. The absence of any evidence for fires or deliberate destruction suggests the city was abandoned quickly, most likely in response to Roman military victory. Although there is still nothing which confirms the site as Bassania, this site now seems the most promising.

Our understanding of the human settlement of the Pacific islands of Polynesia have been transformed by recent ancient DNA investigations, confirming the hypothesis that a wave of Austronesian expansion from Taiwan kick-started the colonisation process. Micronesian prehistory is far less well understood, but this study, led by Harvard researcher Yue-Chen Liu and overseen by famous geneticist David Reich, reveals a rich migratory story.

To test alternative models of population history, we generated genome-wide ancient DNA data for 164 individuals from five archaeological sites and coanalyzed them with published data from two ~2200 BP individuals from Guam (28). A total of 109 individuals (2800 to 300 BP) were from the Unai and Latte periods in Guam, 46 (600 to 200 BP) from the Latte period in Saipan, and 11 (500 to 300 BP) from Na Island and the nearby Nan Madol site in Pohnpei’s protected lagoon in Central Micronesia

The results showed five separate migration streams into the Micronesian islands: three from east Asia, one Polynesian and one unexpected colonisation event by Papuan migrants. 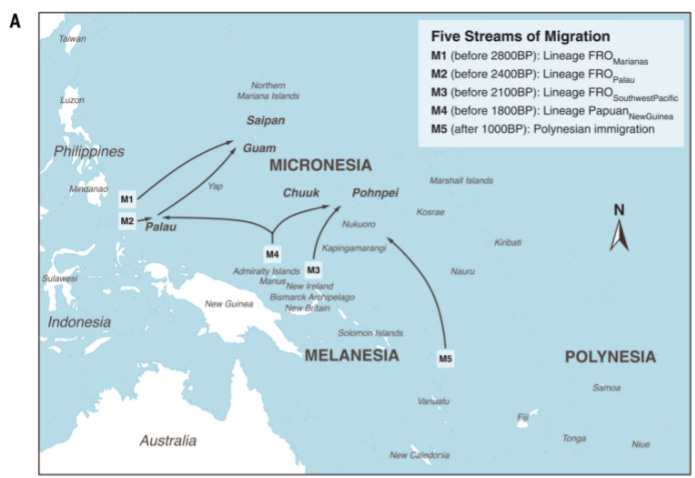 Interestingly the results for the east Asian communities shows a deep tradition of matrilocality, where men would move to join the household of their wife. They also revealed that the Papuan migrations were overwhelmingly dominated by men.

In 2007 a fossilised jawbone was uncovered in northern Spain's Atapuerca mountain range. It was dated to 1.2 million years old, making it Europe’s oldest hominin. A recent excavation at the same site dug 2 metres further down and revealed a new set of jawbone fragments, which have been tentatively dated to 1.4 million years old. A flint found in the same area in 2013 has also been dated to the same time period, which strengthens the case for this being the oldest human colonisers in Europe. As of yet the species is unknown, but Homo antecessor is the most likely.

The Mesolithic cemetery of Oleni’Ostrov in Lake Onega, Russia, is one of the most important Holocene sites in western Eurasia. The island in the middle of a lake contains over 170 burials dating to around 6200 BC, many in superb condition. The grave goods, which have been well documented since the first Soviet excavations in 1950’s, include arrowheads, bone tools and bone pendants. Up until now it was assumed these pendants were made from animal bones, but collagen analysis showed something else:

Of 37 pendants crafted from fragments of bone from 6 different graves, 12 turned out to be human, the analysis showed. (Another two returned results indicating that they, too, might be human, but the findings were uncertain.) These dozen pendants came from three different graves: two holding single adult men, and one of an adult man buried with a child.

Curiously the method of production and curation appears to be exactly the same as for the animal bones, indicating that they were treated identically. We can never hope to know the spiritual and religious beliefs of Holocene hunter-gatherers, but it is interesting that they didn’t appear to view human and animal bone with any degree of difference. Two things come out of this - firstly that testing bone artefacts already held in museums and collections could be highly fruitful, and second that this study would benefit immensely from further DNA testing. If the bones came from individuals related to the people in the graves, or not, it could shed further light on how they viewed human remains and kinship/stranger relationships.

The Red Deer Cave people of China have been a riddle for archaeologists since the 1980’s. Two caves, Longlin and Red Deer Cave in Yunnan, both turned up a very strange assortment of bones. Based on anatomical analysis, these humans should have been around 1.5 million years old, their mix of modern and archaic traits suggesting a very ancient lineage of human. Yet the dating revealed they lived between 17 and 11 thousand years ago, which puts them firmly in the modern human camp. So who were they?

Speculations have included the enigmatic Denisovans or some kind of isolated cross-breed humans. But finally DNA testing has solved the puzzle - Chinese researchers have shown that one individual from Red Deer Cave, despite their archaic features, was a fully modern female Homo sapien. She was from a now extinct maternal haplogroup - M9 - and related to the East Asian groups which went on to colonise North America. The authors noted that her genome showed no additional archaic introgressions beyond the standard Neanderthal and Denisovan additions, shared by all East Asians, but they also observed that the coverage of her genome was low, and specific archaic alleles may yet be discovered in future studies.

Around 164 BC the kingdom of Adiabene was established in northern Mesopotamia after the collapse of Seleucid rule. Its existence is still murky, but the kingdom likely paid tribute to the powerful Parthians. Excavations in Iraqi Kurdistan appear to have revealed a mountain fortress belonging to the Adiabenes:

With the help of drone photography, archaeologists excavated and cataloged thesite during a series of digs between 2009 and 2022. Situated in the Zagros Mountains, the stone fortress of Rabana-Merquly comprises fortifications nearly 2.5 miles (4 kilometers) long, two smaller settlements, carved rock reliefs and a religious complex.

It seems likely, based on coinage references, that the fortress-city was named Natounia, after the king Natounissar. 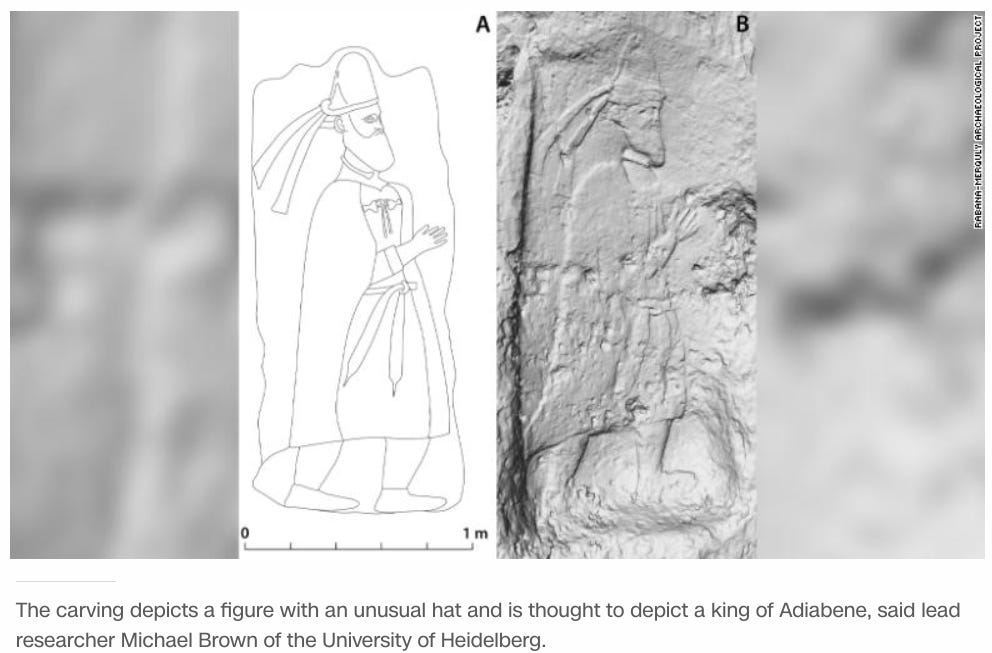 A fortress of this size and scope indicates significant governmental input and oversight, suggesting it played an important role on the border of the kingdom, perhaps to maintain diplomatic or military pressure and contacts with pastoralists and nomadic peoples.

Historic and prehistoric climate events are obviously prominent themes in current research, as is any study on civilisational collapse. This paper, a great example in interdisciplinary study, combined palaeoclimate data with the archaeological record to examine the impact of drought on the Mayan capital of Mayapan in the 13th/14th centuries AD. The hypothesis that water shortages helped collapse the Mayan Empire is not new, but this study attempts to empirically verify the theory by matching climate markers to the archaeology.

The period of depopulation at Mayapan also overlapped with the drought of 1 Rabbit (1454 cal. CE) that caused severe famine in Aztec Central Mexico (Fig. 2)64. That famine followed closely on the heels of a devastating series of climate disasters that affected Central Mexico in 1446, especially, starting in 1450 cal. CE…

The results of the model the team built show a tight correlation between the drought and population decline across the time period 1350 and 1430 AD. Both of these factors seem to have led to the increase of violence at the end of the Mayapan period. But, the collapse of centralised control and population dispersal did not mean the end of the Mayan people themselves. The paper shows that dispersal into smaller, more local city-states meant people were able to continue with their lives. This type of scenario, where political and economic collapse produces new forms of organisation, is certainly worth studying. Too often collapse is synonymous with extinction in the public mind. 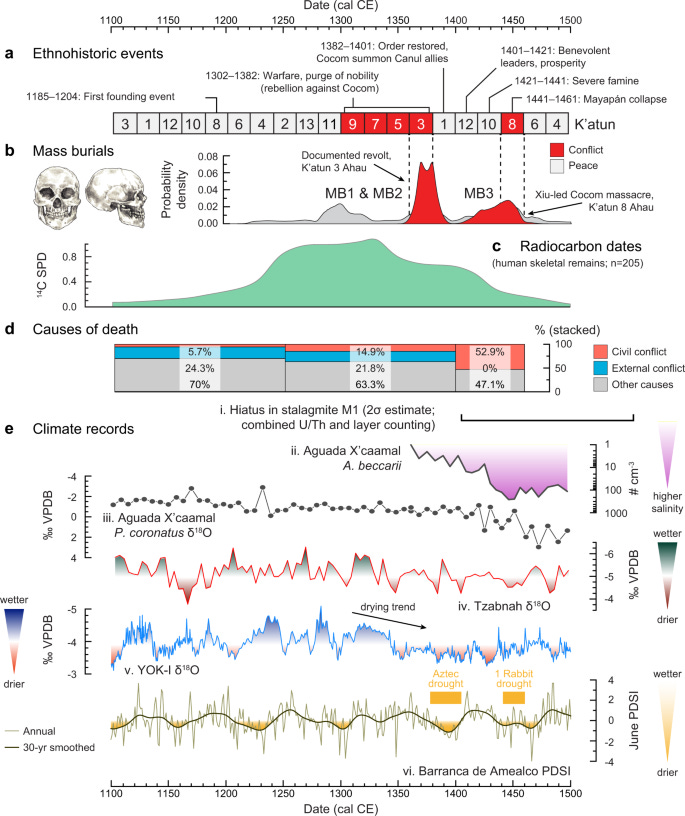 The period between the 11th and 14th centuries is a black hole for English shipwrecks, seemingly none have survived. This discovery off the coast of Dorset by Bournemouth University marine archaeologists is therefore very exciting, shedding light on an unknown period of trade and travel in the artefact record. The clinker built ship was carrying quantities of ‘Purbeck Marble’ from the Isle of Purbeck. This stone was used extensively in building and tombstone production. The ship was made of Irish oak and carrying two beautiful gravestone slabs. Hopefully this spurs further research into underwater archaeology along the UK coast, everything from Holocene forager camps to medieval warships await discovery. 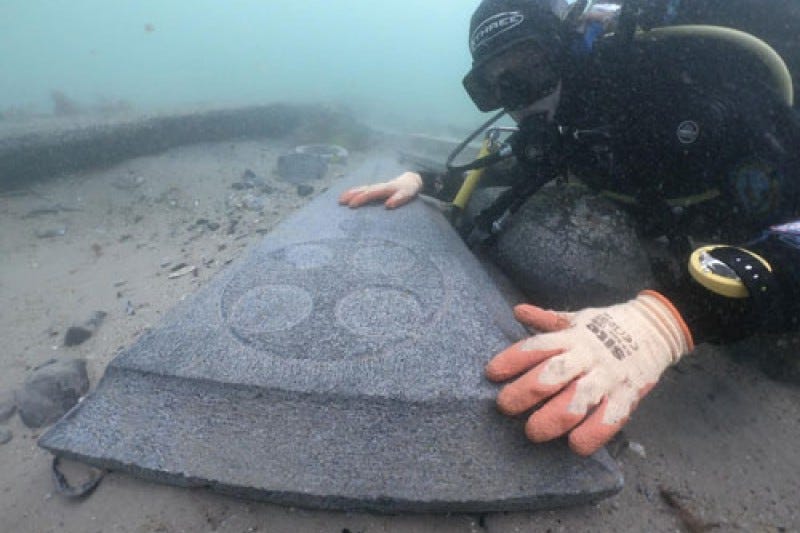 Finally, even during the historic period, when documentation can shed light on events that archaeology cannot grasp, there are still genuinely shocking events to be uncovered. Research into a strange tax exemption granted by the Emperor to the Roman province of Baetica (modern Andalusia) from 245 - 253 AD revealed the most unlikely scenario imaginable - a vast tsunami from the Bay of Cadiz devastated the coastline, reaching 45 miles inland to the city of Seville. The authors describe it as the “biggest on any record - the mother of tsunamis”. Proving a single event occurred using the archaeological record can be tricky, it must have left behind traces strong enough to be distinguished from the centuries and millennia of surrounding soil and detritus. The team in this case used everything they had in their disposal:

Along with the chemical alterations from such a high energy event and the deposition of silts, sands, soils etc into a totally different context, the tsunami also dumped artefacts and objects miles inland, which became trapped and buried. This helped to prove the tsunami occurred and assist with dating:

Among the objects excavated at the site was an inscription reading “IIAVRHERACLAE / PATETFILFBAR AVR HERACLAE/ PAT ET FIL / F BAR.” The artifact was originally fabricated in a ceramics workshop owned by Roman emperors Septimius Severus, Antonino Caracalla, and Geta, which once stood on the banks of the Guadalquivir River. The inscription references Aurelii Heraclae, the family of freedmen who managed the workshop between 197 and 207 AD — the same period from which the other artifacts found on the site date.