From the original article on April 4, 2022, by Stone Age Herbalist.

This is the monthly round-up of interesting new publications in archaeology for March 2022. It’s a new idea and feedback would be appreciated - let me know if it is too much information, or too many papers, or too few. I could always add more.

Summary: Eight papers for March, two focusing on China - potential origins of goose domestication and innovative stone tools/pigment use in the Palaeolithic, three on Central/South America - the discovery of seal tuberculosis in people a good distance from the shore, a major genetics paper on a migration wave in Central America, possibly bringing maize and some rock art from Colombia showing extinct animals. Another genetics paper looking at the Neolithic origins of the Tibetans and finally - a very unusual study of Mesolithic burials based solely on photographs and a speculative piece on how Stonehenge may have been an Egyptian inspired solar calendar.

March 2: Stonehenge As a Solar Calendar

An interesting article from Prof. Tim Darvill at Bournemouth University, UK. Darvill has published extensively on Stonehenge, the origin of the sarsen stones and the British Neolithic and this is exactly the kind of one-off paper a professor with his record could get away with. Archaeoastronomy often has the whiff of crankishness about it in ‘serious’ academic circles. 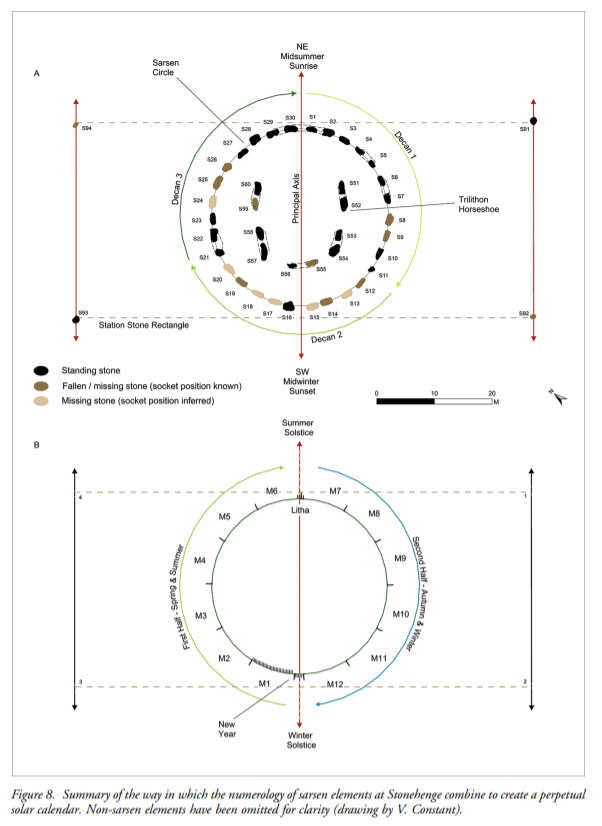 Darvill argues that the sarsen stone circle neatly divides into 12 monthly cycles of 30 days, giving 360 days overall. The five missing days are accounted for by the Trilithon interior horseshoe stones, completing the solar calendar. The famous solstice axis orientation running neatly through the centre of the horseshoe is nice final touch.

Those of a more esoteric mind will be interested in his speculations that the solar calendar, plus the unique construction methods of Stonehenge within a northern European context, point to Egypt as the source of the innovative stonework and chronological architecture. He even cites Geoffrey of Monmouth’s description of Stonehenge as being of African origin…

Overall a thought-provoking paper for those curious about prehistoric astronomy and architecture and the possible connections between Britain and the Near East, but nothing groundbreaking.

While the title of this paper, Innovative ochre processing and tool use in China 40,000 years ago, may not strike many as especially sexy, this was an important publication within East Asian prehistory. The Chinese authors, headed up by Fa-Gang Wang, work out of the Hubei Provincial Museum in Shijiazhuang, while the work was supervised by Michael Petraglia from the Max Planck Institute in Germany.

The paper reports the findings from Xiamabei, a Palaeolithic site in the Nihewan basin in northern China. Xiamabei contains the earliest evidence of ochre processing, a novel miniaturized lithic technology, with bladelets and hafted items, and a bone tool, dating to around 41–39 kya. Why is this important you might ask?

Stone tool analysis is fairly dull to the average non-archaeologist, but differences in the way tools are made and used can point to cultural and even biological shifts over time. Here we see a completely novel method for producing small lithic blades, in combination with grinding and preparing ochre (solidified iron oxide/hematite with clay). Since there is nothing like this either prior to, or contemporary with the site, it points to a major cultural import or adaptation around 40kya.

With very few sites around this time period, the Xiamabei excavations show that modern Homo sapiens moving into northern China brought with them a different complex of tools. Ochre has long been known to be used symbolically, on artwork, in graves etc, so this find helps place the production methods into the early colonisation of East Asia.

Methodologically the paper was very tight, the radiocarbon dates were definitive, the sediment and ochre analysis, lithic use-wear analysis and lithic production analysis was comprehensive. Use-wear can be a fuzzy area to make concrete conclusions, but hafting seems reasonable with the polish on the tools presented.

This was an extremely unusual paper and study in many ways. Researchers from Sweden and Portugal made a very careful examination of bodies buried in Mesolithic (11k - 4k BC) shell middens. However, they didn’t have access to the bodies, only the photographs and site documentation dating from the 1960’s. So how did this get published?

The major authors and researchers of the paper, Rita Peyroteo-Stjerna, Hayley Louise Mickleburgh and Liv Nilsson Stutz, are members of the Archaeothanatology Working Group. Stutz runs the group and is amongst the most experienced mortuary archaeologists in the world. Archaeothanatology is an incredibly niche area of study, combining detailed forensic anthropology and novel mortuary excavation methods to attempt to work backwards from the positions of the bones to how the body was prepared to burial and how the body behaved during decomposition. 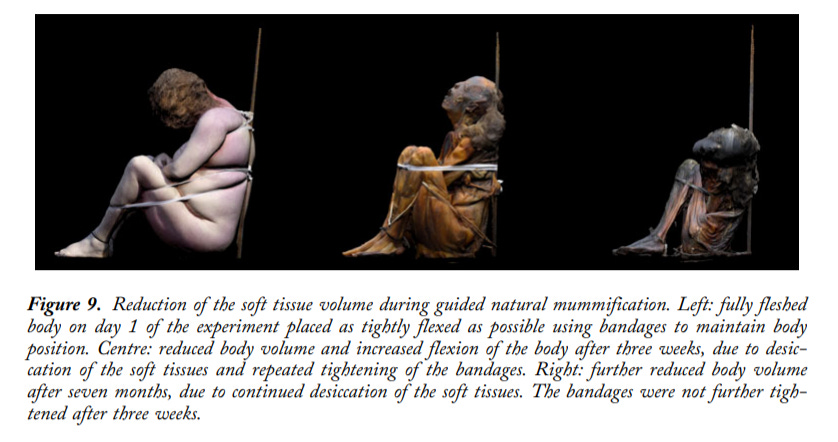 Since bodies decompose in a fairly predictable manner, and biological tissues follow basic laws of physics, it is possible to determine fascinating aspects of the burial rites, such as whether the bodies were wrapped, re-wrapped, buried loose and so on. In this case the researchers concluded that on balance, the Mesolithic skeletons looked to have been mummified prior to burial in the shell middens. This is a tentative result, but there’s almost nobody better qualified to make it.

Verdict: intriguing, would push the earliest known mummification practices back by millennia, jury is still out until confirmed by excavations.

A nice change of pace, a study of rock art from Serranía de la Lindosa in the Colombian Amazon. Researchers from Exeter (UK), Max Planck (Ger) and two universities in Colombia worked together to combine rock art analysis, archaeological dating science and faunal analysis to argue that the rock art depicted many now-extinct megafaunal species. These include the ground sloth, camelids, gomphothere and three toed ungulates with trunks.

There’s nothing especially controversial about linking prehistoric art depictions of extinct animals to the faunal record, it has been done with great success for decades in Europe. Provided the dating is secure, which from my brief glance at the stratigraphy, it seems to be, then the depictions hold potentially fascinating clues about how humans viewed and visually depicted animals.

The only thing guaranteed to raise eyebrows is the liberal interpretation of the artwork itself. Some might object to such detailed species depictions from perhaps less definitive source material. 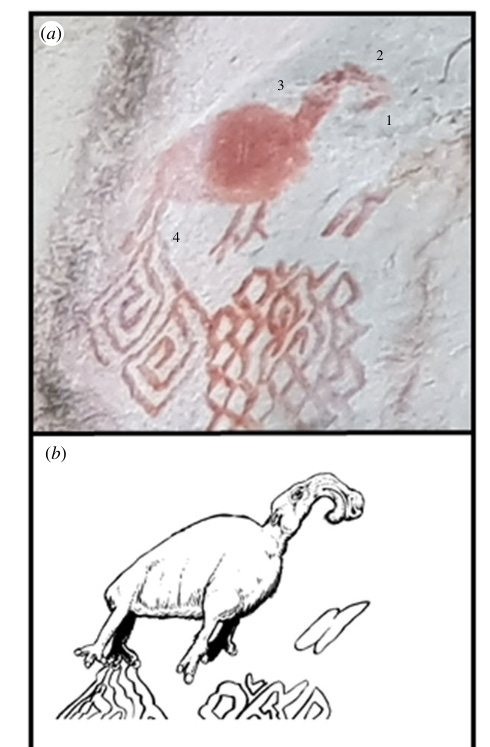 A ‘big-if-true’ paper from China, led by Japanese researchers. Excavations from a Neolithic village (5000 BC), Tianluoshan, in the lower Yangtze River valley, revealed a number of goose bones of different ages. Bird bones are notoriously fragile and the preservation of the juveniles in particular was great to see. Using a neat combination of bone and isotope analysis the researchers were able to identify five individuals who had not migrated with the wild geese and who were too young to have come from elsewhere, this leaves them with the possibility that the geese were raised from a captive flock by the villagers.

Identifying domestication in the fossil record is extremely difficult, as moments of physical transition from wolf to dog, aurochs to cow, are virtually impossible to securely pinpoint. Here the isotope analysis really helps to delineate these individuals from the other wild geese, but the possibility remains that these remained essentially wild and were not the founders of later domesticated geese. Abortive attempts would have been more common than not, since people were not ‘aiming’ to domesticate as such.

Overall a neat paper which certainly opens the possibility that geese were the oldest domesticated wildfowl.

Another paper from Max Planck, always a powerhouse. This time looking at genetic evidence for tuberculosis infections in pre-contact South America. Traditionally it was believed that TB was an infection of colonisation, but recent genetic results show that unique strains hopped from wild animals to Amerindian populations long before Europeans arrived.

Here the genetic sequencing revealed a strain called M. pinnipedii which is very rare today and come from seals and sea lions. The current hypothesis is that prolonged contact through hunting and butchery provided the vector for infection. Methodologically the paper seems straightforward although the sampling seemed to pick up modern mycobacterium material which, despite substantial effort, could not be ruled out as a contaminant source of DNA.

Overall an interesting article, in particular the detail that the individuals sampled lived too far from the coast to have reasonably caught TB directly from a seal or sea lion, indicating that at some point the disease was able to be transmitted from person to person. This could be important for understanding the health of pre-Columbian South Americans.

An illuminating paper, mostly from the Department of Human Genetics at the University of Chicago. Tibet has long been of interest to prehistorians and geneticists for their cultural and physical isolation. Previous work showed genetic introgression from Denisovans which, after the Han-Tibetan split, provided remarkable biological capacity to function at altitude.

Here the researchers sequence an additional 33 full genomes to add to existing records. This is a large number for an ancient dataset and we can expect to see a lot more done with these in the future.

Overall the results demonstrate that modern Tibetans descend mostly from late Neolithic populations living in the lowlands. A small but ancient contribution from a as-yet unknown Palaeolithic population was noted. Intriguingly this population is not related to any of the major lineages described so far in the literature, i.e the deeply branching eastern Eurasian lineages, such as the 45kyo Ust’-Ishim individual from southern Siberia, the 40kyo Tianyuan individual from northern China, and Hoabinhian/Onge-related lineages in southeast Asia.

Finally the results point to two routes of colonisation, rather than one wave of Neolithic migration into the Himalayas. 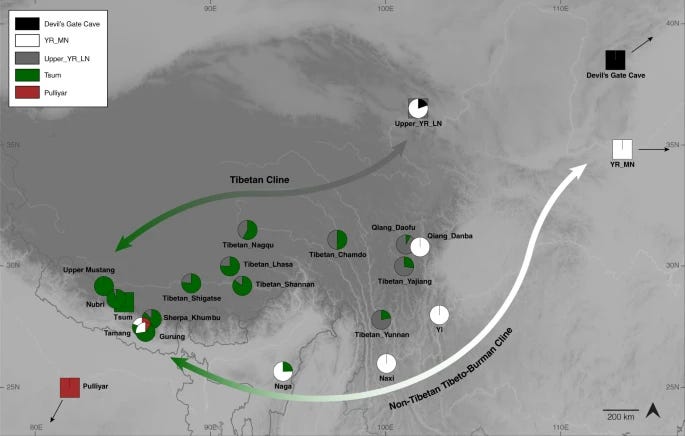 A big paper in human genetics, will probably help rewrite much of central American prehistory and perhaps history. The lead researcher, Douglas J. Kennett, is from University of California, Santa Barbara, while the majority of the input and overall supervision was under David Reich and colleagues from Boston.

In a nutshell, 20 new prehistoric fossils were genetically assessed, dating between 9,600-3,700 BP, and revealed that the earliest incomers to the region now have little in common with the current residents. Also that around 5600 BP, a huge wave of migration from southern America contributed around 50% of all later populations. This wave is most closely associated with modern Chibchan speakers around Costa Rica. Most significantly, the arrival of these newcomers corresponds well to the beginning of forest clearance and the dependency on maize crops.

Interestingly the mitochondrial DNA of the earliest Holocene era settlers (9600 BP) shows an almost complete replacement in later populations. This is strong evidence for wide spread population change. It is also possible, based on maize genetics, that the Chibchan incomers were bringing an improved variety, rather than a new crop.

Overall this is a crucial new paper for understanding population ancestry in Central America and will likely shape many new research projects as other labs and scholars look to make sense of the results in more detail. Genetics can be quite a blunt tool at times and matching it up with the fine-grained archaeological data will be the next major challenge.