From the original article on June 1, 2022, by Stone Age Herbalist.

May has been another busy month for archaeologists, particularly in genetics, where a number of huge papers have rewritten decades of theories. Several earliest dates have been published, including potentially the first domesticated cattle and use of iron; lots of organic residue analysis on teeth, bronze weapons, child mummies and Buddhist incense and the discovery of a new Denisovan fossil rounds out the list.

A flourishing area of scientific archaeology is the use of molecular techniques to analyse organic traces left behind in and on artefacts. These are particularly useful to help identify the function of an object, which can be very different to first assumptions.

In a new study out of Newcastle University, ten copper-alloy daggers from Bronze Age Pragatto, Italy, (1550–1250 BC), were tested for residues on the blades, handles and wrappings. Micro striations on the metal revealed hydoxyapatite, a prominent mineral in bone, and collagen. The interpretation is that these were used for animal butchery. Crucially they were able to show that copper ions prevent bacterial decomposition of the molecules, something which occurs frequently on artefacts. This helps show that bronze age daggers were fully functional tools, and not as often thought, purely ceremonial or ritual weapons.

New dating results from excavations in Mayiladumparai in Krishnagiri district have found worked iron as far back as 2172 BC. In conjunction with the distinctive black-red-redware ceramics, this pushes the use of iron to the very start of the Neolithic period in the region, dated at 2200 BC.

May 11th - Spread of Horses and Dairying in the Altai

The spread of pastoralism and capacity for dairy drinking is a crucial topic for world archaeology. Similarly, when domesticated horses arrived in the eastern steppe regions is important for understanding the rise of more complex steppe or nomadic empires. In a wide ranging study with researchers from Mongolia, the USA, Germany and China, teeth from human remains across multiple time periods were analysed for protein evidence, linking up traditional burial archaeology with the latest bioarchaeological methods.

Dental calculus contains trapped particles and molecules of food consumed through an individual’s life. The emerging use of protein analysis - proteomics - has been able to carefully differentiate not only dairy proteins from other food sources, but also the types of dairy being consumed. The results suggest the following sequence of pastoralism into the Altai region:

This suggests a later introduction of herded horses than perhaps realised, or at least the use of horses for dairy. Prior to this it seems dairy was from sheep, goats and ruminants. Cemetery data suggests a population boom around the period when horse dairy begins to be consumed.

Tentative results from a Polish team excavating in the Central Nile region of Sudan suggests cattle domestication may have occurred in East Africa around 10,000 years ago, rather than in southern Anatolia as previously believed. This would overturn a central narrative in human prehistory, that the movement of cattle outwards from the Fertile Crescent brought pastoralism into Africa during the Green Sahara.

Two child mummies recovered from the Ampato mountains in Peru, dated to around 500 years ago, were tested for metabolite related to drug consumption. The study was led by Polish researchers using a technique called liquid-chromatography gas-spectroscopy which allowed them to isolate and identify small secondary molecules from the mummy’s hair and teeth. They identified cocaine, benzoylecgonine, cocaethylene, mescaline, tryptamine, harmaline and harmine, which points to the victims chewing coca leaves and consuming ayahuasca within their final weeks. Curiously, at least to me, the researchers lean on the supposed anti-depressant properties of ayahuasca as a possible motivation for its consumption. Personally chewing coca leaves and drinking hallucinogenic brews doesn’t exactly scream relaxed, but that’s for another day.

May has been a very busy month for genetics papers which seem to be coming thick and fast with no chance to integrate all the new data. Earlier we had a huge paper from Allentoft and co - The Population Genomics of Stone Age Eurasia - which I wrote about in a separate post. We also saw this crucial paper on early farmer genetics, headed up by the University of Berne, Switzerland.

To do justice to this paper would also require a much more detailed analysis, but broadly speaking the model looks like this: 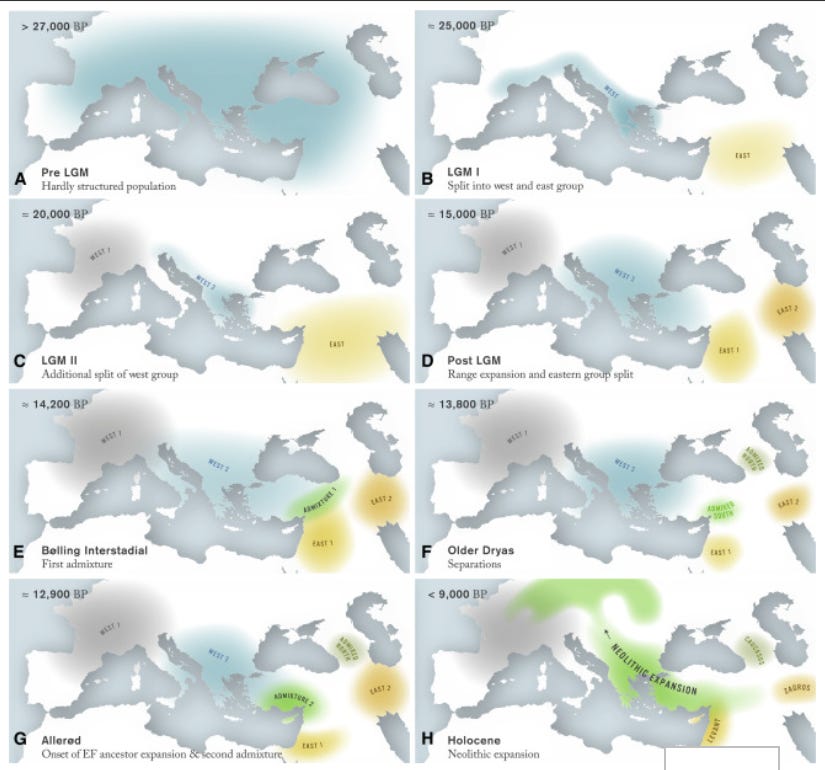 A severe bottleneck of European hunter-gatherers during the Last Glacial Maximum; the separation of an Eastern & Western group of hunter-gatherers; the further separation of these into two Western and two Eastern; the admixture and formation of an Anatolian population and a Caucasian population; the formation of an Aegean population and the final expansion into Europe. A highly simplified overview but one which matches previous genetic models and traditional archaeological data.

Denisovans as a species have produced almost no fossils, most likely because previous generations interpreted them as another hominid. Only a handful of teeth and bones currently exist, the vast majority of our knowledge of this group coming purely from genetic studies. New from Laos indicates a new tooth has been identified, most likely from a young female. Although we know Denisovans spread as far as Oceania, the only firm locations are Siberia, Tibet and now Laos. Hopefully this is the start of new era of fossil hunting and reevaluating older archives and collections.

Uruguayan indigenous history is still somewhat unknown compared to other American nations. The traditional narrative has favoured a single people who were killed off/died out during European colonisation. However, genetic evidence points to a more complex story.

This paper, the work of joint researchers in the United States and South America, used whole genomes from archaeological remains dated to around 2,000 years ago. The results indicate two ancestral sources, one deep component linked the distinct Uruguayan subhaplogroup C1d3 and the probably extinct mitochondrial haplogroup CH19B; the other related to a later Panamanian source which shows little connection to modern Amazonian populations. The authors interpret this as a possible Atlantic coast migration path, linking Panama, coastal Brazil and Uruguay. 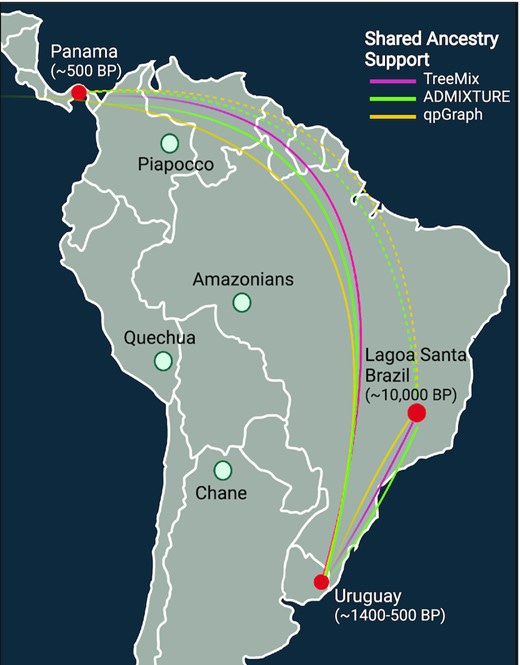 Incense is a archaeological chemist’s dream, since the resinous organic molecules preserve very well in comparison to most artefacts. They can also be identified relatively easily given their exotic origins. Chinese researchers uncovered three containers dating to the Tang Dynasty (A.D. 618–907) from the underground complex at the Famen Royal Temple in northwestern China. The temple was known for curating the finger bone of Sakyamuni Buddha. The three containers yielded fragrant agarwood and frankincense, highlighting the importance of the Silk Road trade in high value goods during the Tang Dynasty.

LIDAR (light detection and ranging) has been a game changer for field archaeology. LIDAR uses laser scanning to measure the time taken for light to return from the surface of the earth and can build exceptionally accurate models of long gone settlements and earthworks. It has been particularly productive in parts of the world where traditional testing methods would be difficult, like the rainforest. A number of pre Hispanic Amazonian settlements have been uncovered, proving correct early testimonies by conquistadors and explorers that parts of the Amazon were dense urban civilisations.

This latest paper expands on this work, revealing two urban settlements in Llanos de Mojos savannah–forest mosaic, southwest Amazonia - estimated at 147 ha and 315 ha in a dense four-tiered settlement system and dated to the Casarabe culture, roughly AD 500 to AD 1400. Quoting from the paper:

“The civic-ceremonial architecture of these large settlement sites includes stepped platforms, on top of which lie U-shaped structures, rectangular platform mounds and conical pyramids (which are up to 22 m tall). The large settlement sites are surrounded by ranked concentric polygonal banks and represent central nodes that are connected to lower-ranked sites by straight, raised causeways that stretch over several kilometres. Massive water-management infrastructure, composed of canals and reservoirs, complete the settlement system in an anthropogenically modified landscape… Labour investment in the construction of the core area of the Landívar site (artificial terraces and platform buildings of the civic-ceremonial centre) is approximately 276,000 m3. The investment in site construction is even more impressive for Cotoca, for which the core area totals 570,690 m3” 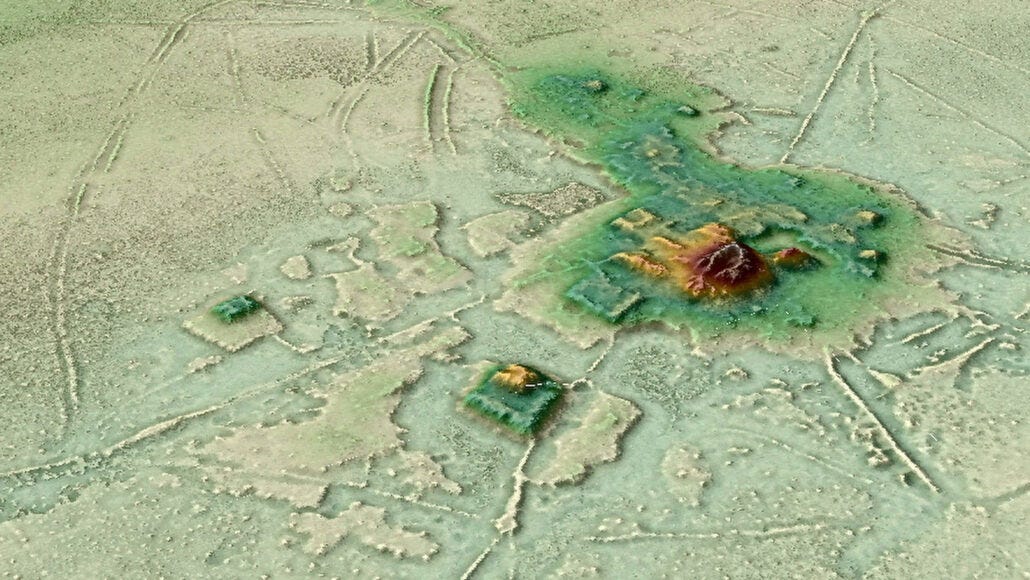 This screenshot from a lidar-based 3-D animation shows the layout of Cotoca, a primary site in an ancient Amazonian urban network. Raised causeways radiate in different directions from platform mounds, pyramids and other structures.

This represents the tip of the iceberg for Amazonian archaeology. Not only will we certainly find more settlements like these, but the task now begins to start excavation work and see what artefacts and/or burials can be recovered. Rainforests are not kind to organic remains, but stone tools and objects, metals, ceramics, shells, remains of fires and construction materials and much more can hopefully be revealed and integrated into the new emerging picture of pre Columbian South America. Who knows what stories we will be telling in a few decades time.