From the original article on November 3, 2022, by Stone Age Herbalist.

This month had a particularly wide variety of papers and methods, from dental calculus to drone mapping, glass isotopes to machine learning. I think readers will find it interesting to see how modern archaeology makes use of the different analytical techniques available. There were some bigger genetics papers, including a new ancestral story for the peopling of Britain after the ice age, but I want to incorporate that into a larger article another time. Hopefully this selection is adequate, everything from Mesoamerican sacrifices to Holocene Pygmies, Viking craft work to esoteric desert shrines. I hope you enjoy.

The form and composition of materials provides the bread and butter of traditional archaeological research, but glass often gets overlooked. In this paper from Aarhus University, a number of Viking-era beads from two workshops in Ribe, circa 8th century AD, were chemically analysed to determine their origin. Elements and compounds such as lead oxide and different isotope ratios, such as strontium 87/86, were reported and then compared to the known production methods of glass in that time period. Different types of glass, such as wood ash, plant ash and natron glass, have distinct molecular fingerprints which not only pinpoint who made them, but where. Natron glass was the Roman standard, and it contains lower levels of potassium and magnesium oxide. By comparing these production methods to the Viking beads, the researchers determined that the Ribe workshop was receiving looted mosaic pieces, taken from old Roman ruins across Europe. These were then recycled into beads and vessels.

Machine learning doesn’t often see much use within archaeological research, but this paper from the University of Bristol found a curious niche. Across the Bronze Age Aegean excavators often find small stone balls, which has prompted a number of explanations, including slingshots and toys. They come in a number of sizes and materials, some more rough than others. But when the researchers applied a machine learning algorithm to the total dataset, they got a surprise.

The outcome showed that the stones fell into two distinct sizes, a result which holds across a number of sites and islands. The researchers then combined this with the discovery of stone slabs which contain shallow depressions and found a possible correlation between the pits and the stone sizes. From this they tentatively conclude that the spheres and slabs were gaming board pieces, perhaps a common cultural artefact. Most fascinatingly, the authors want to apply a similar methodology to see if they can determine how the game was played. Who knows, we may see the resurrection of an archaic board game in the future?

To anyone familiar with the weird and wonderful world of classical and medieval anthropology, the term Blemmyes conjures up images of headless men. But the Blemmyes were also a real people, albeit a mysterious semi-nomadic one, who lived and flourished in the Upper Nubia region between 1000 BC -700 AD. Much is unknown about their culture and politics, and what we do know comes from Greek and Roman sources. Archaeologically the Blemmyes are not easy to define, their material culture linking with the Meroitic, and the weird X-Group and C-Group cultures.

This paper only adds the strangeness of the Blemmye. Excavations in 2019 at Hellenistic-Roman port of Berenike, on the Red Sea coast of Egypt, revealed a Roman building with an Egyptian-style temple. Careful work reveals three phases: an unknown function, followed by a rebuilding period, which saw restoration and repurposing of the shrine - falcon bones, South Arabian and Aksumite pottery and a 4th century AD coin. Finally, a Blemmye-style reuse around the 5th century. A number of raptors were placed in the shrine, including nine young peregrine falcons, two saker falcons, and one adult kestrel. An intriguing stone stele was also found here, with the enigmatic Greek inscription:

“It is improper to boil a head in here.” 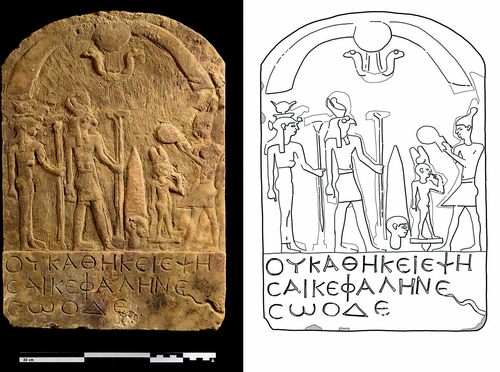 Our working hypothesis is that the Falcon Shrine in its latest phase could have served the Blemmyan population of Berenike. The potsherds of Eastern Desert Ware found inside the shrine point in this direction, as do the inscriptions for Isemne and Kabantia from the neighboring shrines. The series of shrines in the Northern Complex show a Late Roman-era religious complex in which Egyptian cults were maintained with many reused objects of early Roman date.

The Mesopotamian City of Lagash

Drone photography is proving its worth in historical research. This month we have a paper from the University of Pennsylvania which is helping upend an old hypothesis about Mesopotamian city origins. The traditional model of urban origins has focused on a central point, with city life then radiating outwards over time. However, this has been challenged, and evidence from Lagash in southern Iraq has partially confirmed the old story to be wrong. Rather than forming from any one point, Lagash appears to have been a series of disconnected marsh islands, which gradually knitted together using canals, waterways, bridges and docks. The end result looks more like Venice:

Drone evidence of contrasting neighborhoods on different marsh islands, some looking planned, and others more haphazardly arranged, reflect waves of immigration into Lagash between around 4,600 and 4,350 years ago. Excavated material indicates that new arrivals included residents of nearby and distant villages, mobile herders looking to settle down and slave laborers captured from neighboring city-states.

Mayan Sacrifice Victims May Have Been Gagged

Mayan archaeology rarely disappoints fans of the macabre. In a new study of sacrificial victims from the ‘Midnight Terror Cave’ in Belize, dental calculus was analysed for trapped particulate matter. Calculus is a treasure-trove for researchers, since it contains all kinds of molecules, fibers, food fragments, DNA, bacteria and so on, which gives an insight into a person’s life. But instead of finding the food evidence they were hoping for, the authors instead found bright blue strands of cotton. Maya Blue is an important ritual pigment, discovered in alcoholic beverages in Teotihuacan. But its presence in the teeth of these victims suggested some other possibilities - one of which was that the individuals were gagged with ceremonial cloth for extended periods of time. Personally, I am sceptical, since calculus formation is unlikely to be fast enough to preserve such an event. More likely these were people involved in the production and manufacture of the dyed fibre. But it highlights how useful calculus is in storing descriptions about people’s lives.

One of the most enduring legends of the Austronesian and Polynesian peoples is the presence of ‘little black men’ already on the islands when they arrived, all across the Pacific and maybe even Madagascar. Long dismissed as a fairy-tale by researchers, there is growing evidence for ‘pygmies’ or Negritos across southeast Asia in places not previously known. Modern Negritos are found in the Philippines, the Malay Peninsula and the Andaman Islands, but this new paper confirms that they once lived in Taiwan.

The skeleton of a pygmoid individual was recovered from Xiaoma Cave in eastern Taiwan, dating to 6,000 years ago. This predates the arrival of the Neolithic Austronesians, who appear around 4800 years ago. Legends of the ‘little black people’ abound in the Taiwanese Austronesian corpus, ranging from friendly interactions, to hostility, to contemporary worship of their spiritual power. Whilst this study did not perform any genetic analysis, cranial measurements link them to the first wave of humans to arrive in southeast Asia. However, since Palaeolithic skeletons from Taiwan do not display the characteristic short stature of the Pygmy/Negrito peoples, there are a range of possibilities: did the Xiaoma Negritos develop in situ, from taller populations? Or did they arrive later, in which case from where? 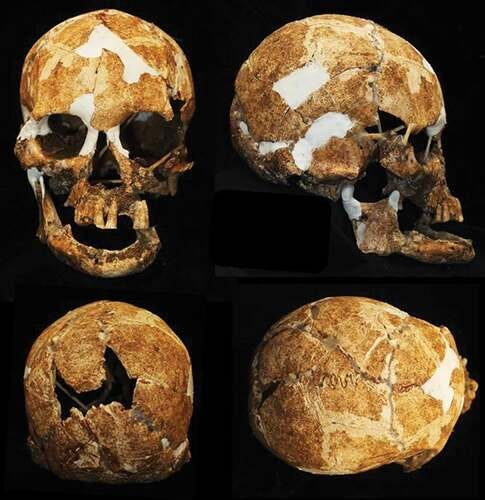 When, where and how modern Negritos descended is still a contentious question, since some groups display very high levels of Denisovan admixture, while others have none at all. Some argue that pygmoidism develops independently, while others insist they must have some common ancestry. What we do know now is that Negritos were more widespread than today, and that the Austronesian stories were not tales, but based on true encounters. This begs the question, what other mythical folk stories are real?

Evidence has slowly been accumulating that some Neanderthals lived in a patrilocal family system, meaning that women moved to different groups to marry, mate and reproduce. This now seems almost certain based on a new genetic analysis of Siberian Altai remains. Around 51-59,000 years ago, the outer edge of the Neanderthal world was in these mountains, where they butted up against Denisovan territories. Indeed, a Neanderthal-Denisovan hybrid was discovered in the same region, around 30,000 years earlier. The family portrait which comes from Chagyrskaya Cave, reveals a father-daughter pair, close relatives and possibly an aunt-nephew pair as well.

What makes the result surprising was the relatively high mitochondrial DNA diversity amongst the group, which suggested to the researchers that women were arriving to the group from outside. It could also mean that just a few Neanderthal males were fathering the children, but the best fitting scenario was a community of around 20 people, with 60-100% of the females from another group.

What remains to be seen is whether this pattern holds for European Neanderthals, who likely lived with slightly more dense population numbers. Why exactly these family groups were living so far out in the mountains may never be known, but it would be very intriguing if they had a different familial structure. 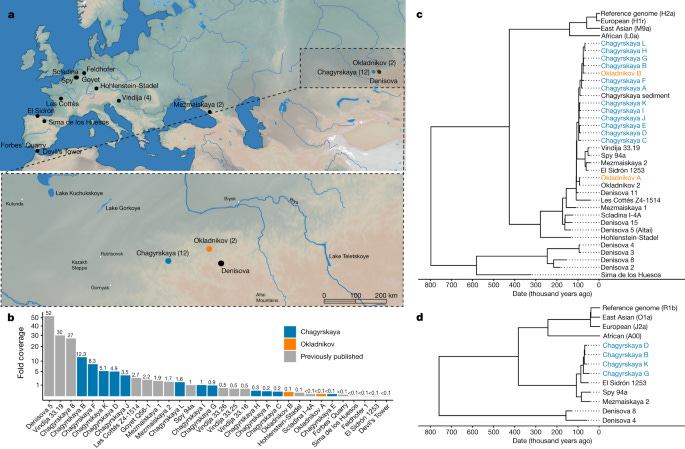