From the original article on October 6, 2022, by Stone Age Herbalist.

This month has a good mixture of topics, ranging from animal domestication genetics to modern shipwreck hunting. I’ve tried to include a number of evolving techniques in isotope analysis, metallurgy, organic residues and marine archaeology. The spread is wide, from the European Neolithic to Palaeolithic Borneo to the wonders of Peruvian civilisation. The largest paper this month is the huge genetics paper covering the Anglo-Saxon migration period, which has taken up a bigger share of the reports.

The successful removal of an injured or diseased limb requires immense knowledge and skill with anatomy and post-surgical care. The earliest known examples date to the agricultural Neolithic period, when societies were deemed to be ‘complex’ enough to have developed a tradition of surgery. However, a new paper from Australia pushes this date back to 31,000 years ago, which is truly remarkable. From the Liang Tebo cave, Borneo, comes the skeleton of a young person with a deliberate amputation of the lower left leg. The tibia and fibula had been carefully amputated and the bone showed remodeling, suggesting the person outlived the operation by 6-9 years. Bone thinning indicates they were fairly sedentary afterwards, unsurprisingly. That Palaeolithic foragers were able to perform the procedure with stone tools and prevent an infection afterwards speaks volumes about their skill and compassion. 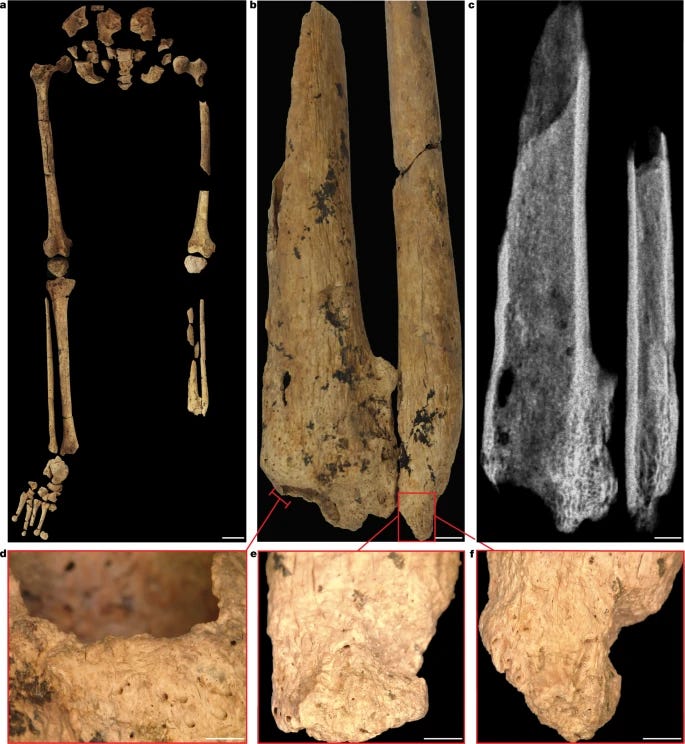 The Genetic History of Donkey Domestication

Human history in Africa and the Middle East is unimaginable without the camel and donkey, yet researchers know little about how and where the donkey was domesticated and how bloodlines were managed. This paper from the Centre d’Anthropobiologie et de Génomique in Toulouse combined 49 new modern donkey genomes with 158 public datasets to create a comprehensive phylogenetic map, pointing clearly to East Africa as the original point of domestication. Adding over 30 ancient donkey genomes to these results gave the following narrative:

The paper notes large absences in their datasets, particularly for sub-Saharan Africa and Saudi Arabia, as well as gaps in the narrative such as how and where the first donkeys left Africa, but overall, this is a huge contribution to an understudied field.

Isotope analysis is a powerful method for determining the conditions under which plants and animals grew in their lifetime, the different ratios of isotopes corresponding the different nutrient levels and availability. Applying this to recovered cereal grain allows researchers to uncover whether they were grown in manure rich soil or naturally produced earth. Neolithic farming techniques seem very different even across nearby landscapes, reflecting in part skill, access to seed variants and the underlying soil quality.

The British Neolithic has seen both extremes over the years, from interpretations that early agriculturalists used semi-nomadic slash-and-burn methods to settled permanent, well manured fields. Sometime in the Late Neolithic period, agriculture in England seemed to disappear altogether, replaced with a pastoralist and nut-gathering existence. A new paper looking at a timber hall from Balbridie, Aberdeenshire, shows that early Scottish agriculture had a similar experience. Tens of thousands of wheat grains revealed isotope levels consistent with no manuring, while in comparison, Orkney and Angus Neolithic grains showed moderate fertiliser use, as well as careful selection for lighter, sandier soils. Clearly in some places the Scottish soil was of sufficient quality to farm without nitrogen inputs. While perhaps a less sexy paper, accumulation of these datasets allows us to build a good picture of Neolithic farming as it waxed and waned towards the Bronze Age.

The Wari civilisation are one of those enigmatic South American cultures that receive little attention. Sandwiched between the Moche and Chimu peoples chronologically, the Wari came to dominate the coasts and highlands of Peru between 500 to 1000 AD. A violent, stratified and highly religious people, the Wari were also exceptionally skilled metalworkers and craftsmen. In an announcement from the University of Warsaw, a huge number of elite burials have been excavated near Lima:

All the remains in the tomb were buried with gold and silver jewelry, bronze tools, knives, axes, baskets, woven textiles, raw materials for basketry, and wood and leather items — an abundance of objects that makes archaeologists think the people buried there were skilled craftspeople, as well as members of the Wari elite.

“We could call this part of the royal necropolis 'The Gallery of Elite Craftsmen'…For the first time, we have found the burials of male Wari elite, who were also fine craftsmen and artists." 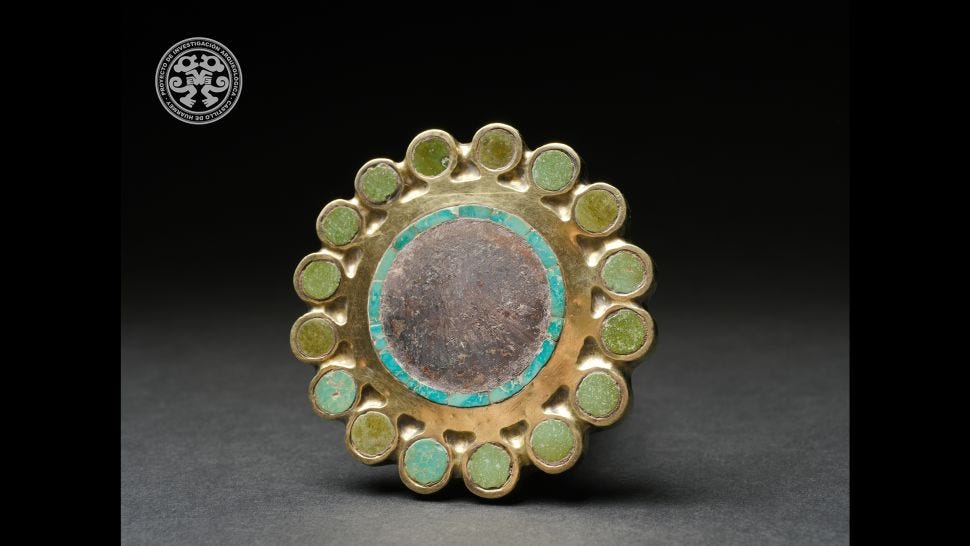 A number of mass graves have been documented during the LBK European Neolithic period, at Talheim, Herxheim, Schletz-Asparn and Schöneck-Kilianstädten to name but a few. They all roughly date to between 5000-5500 BC. This latest pit was discovered in Vráble, Slovakia, and presents us with a similar situation - around 35 people thrown in a mass grave:

“The bodies originally lay in various positions – on their backs, on their stomachs, on their sides, some in a frog-like position. A common feature is, as with the previous uncovered skeletons, that the buried individuals at the bottom of the ditch are missing their heads. We found only one child's skull and one part of a sled.”

The settlement itself developed into a huge, fortified site, with 300 identified longhouses, a moat, six separate entrances and a palisade fence. This level of construction suggests that the people living there feared violence and aggression, which they ultimately experienced. Exactly why these Neolithic cultures engaged in this widespread spasm of violence across Central Europe is still unknown, but disease and the collapse of long-distance trade seems to be involved.

Lead white is a mixture of hydrocerussite and cerussite, which forms a white powdery pigment. It has been used extensively throughout prehistory and history, from European oil paintings to Egyptian murals. Cerussite can be mined naturally, and it was, but around the 4th century BC a synthetic production method was invented in Greece. The corrosion method uses vinegar, steam, heat, and carbon dioxide to transform lead into lead acetate and then carbonation into lead white. In the same time period, lead white appears in China, which has puzzled researchers for a long time. Did the Chinese learn to manufacture it from the Greeks, or vice versa? A new paper this month shows that the Chinese method was different, original and earlier than the Greek corrosion process:

Here, we investigate some white cosmetic residues from the Liangdaicun site during the eighth century BCE in northern China through FTIR, XRD, SEM-EDS, radioactive and stable carbon isotope analyses. The results show that these residues were the earliest synthesized lead white in the world to date, which was produced by the precipitation method in solution distinct from the corrosion method practiced in ancient Greece. Thus, the synthesis of lead white should have evolved independently in east and west Eurasia during the first millennium BCE

Since lead white was principally used for cosmetics and paintings, it is fair to say that the human desire for aesthetics and beauty helped stimulate complex chemical knowledge and practice. The earliest known Chinese application of lead white comes from the Terra-Cotta warriors, showing how power and visual art were also closely linked.

Marine archaeology is one of those areas tipped to be the future of prehistoric research, with many important Pleistocene and Holocene sites submerged by the rising sea levels after the Ice Age. Developing the capacity for autonomous seabed mapping and high resolution imaging is a central task for the field, which is why the latest announcement from Bangor University is exciting for marine archaeologists. Using recent developments in multibeam sonar technology, researchers were able to identify over 100 unlisted shipwrecks across 7500 miles of the Irish Sea. Among the wrecks was the SS Mesaba, positively identified for the first time. The SS Mesaba is an unremarkable merchant vessel, but in 1912 she was crossing the Atlantic and sent a warning message to the RMS Titanic. Infamously the message was received but failed to reach the bridge. The Mesaba was later torpedoed during WW1 in 1918 while in convoy.

Mayan Cacao Not Just For The Elite

The use of cacao in Mesoamerican societies has traditionally been viewed as an elite practice, limited to royal and senior figures and associated with power and status. However, this view has come to be challenged and recent biomolecular analysis of pottery sherds from El Pilar (600-900 AD) across a number of residential contexts seems to prove the opposite. Extracting compounds preserved in the matrix of pottery is a technique long term readers have seen before, and successful studies rely on the presence of unique molecules to identify the substance stored or cooked in the pot. In the case of cacao, three molecules have previously been highlighted - caffeine, theobromine and theophylline. Of the three, theophylline is the rarest molecule and could only have come from the cacao plant during this time period.

With our technique validated, we expanded the sample to investigate cacao distribution by selecting an additional 41 vessels from large, medium, and small residential units in the upland ridges, the transitional foothills, and the alluvial Belize River valley, where cacao was documented at the time of the conquest (34). Sampled civic centers include the major center El Pilar, the minor centers Bacab Na, Yaxox, and MC214A. Together, the 54 samples provide a window for viewing the importance of cacao among the ancient Maya

Interestingly, the range of different vessels studied revealed that cacao traces were not limited to drinking cups. In fact all basic domestic pottery, jugs, plates, mixing bowls and storage jars, showed signs of cacao. Combined with the general domestic context, the researchers infer that cacao use was widespread, used in food and drink and available to all sections of Mayan society.

The long awaited Anglo-Saxon paper finally arrived this month, with no shortage of controversy. Others have done more detailed reviews but a basic overview is always welcome. The debate over the nature, scale and even reality of Germanic migration to Britain in the post-Roman period has raged for decades. In the post-war era a number of stances were taken, including full-scale population movement, elite warband invasion, passive migration and minimal to no migration at all. This paper combines 460 ancient genomes with over 5,000 modern genomes to provide a comprehensive study of population movement into Britain.

The ancient genomic data came from England (278 individuals) and northern Europe/Ireland (182) for the period 450-850 AD, along with some bronze and iron age datasets. The results are generally unsurprising, with a few interesting nuances:

So, while this is a broad sweep of several centuries, the results clearly show that a mass migration event took place between 450-850 AD, the majority coming from Saxony to eastern and central England. While this doesn’t rule out an initial war-band scenario, it does indicate that elite dominance was not the main form of social transformation, and that large numbers of Germanic settlers came in family groups to England’s shores. The patchwork and regional nature of the data will be pored over and combined with previous work on material culture for many years, and there are individual stories to tell amongst the huge dataset. But this seems like the nail in the coffin of all suggestions that Anglo-Saxon migration did not occur.

Previous hypotheses about the social mechanisms in this migration have included partial social segregation, elite migration, substantial population replacement or no migration at all. Our combined genetic and archaeological analysis point to a complex, regionally contingent migration with partial integration that was probably dependent on the fortunes of specific families and their individual members.