To review: We have now had ten months of mass vaccination against SARS-CoV-2. Nearly 7 billion doses have been administered worldwide. This unprecedented campaign has not eradicated Corona; it has not even suppressed infections. Instead, case statistics have ballooned almost everywhere. While the vaccinated appear to enjoy some protection against severe outcomes, skyrocketing transmission means most countries have seen little benefit, on balance, from their universal vaccination campaigns. The most pressing question has become, simply: What is going on?

I’ve explored a few different possibilities. First, there seems to be a Marek Effect at work. We might imagine that all viruses have an optimal level of population-wide virulence – an advantageous degree of aggression at which they can spread effectively, while not driving their hosts underground too soon. Certain Delta sub-strains, previously punished for their excessive aggression in unvaccinated populations, have likely been favoured by the vaccines, which reduce symptoms in the vaccinated without preventing infection for more than a few months. Our vaccines reduced the average virulence of SARS-2, and the virus adapted to reattain the prior, optimal balance.

But the virus and its interactions with human hosts constitute a complex system. In such systems, it is very unlikely that any effect can be put down to a single cause. The Public Health England data provide powerful reasons to suspect that the vaccines may be compromising immunity to SARS-2 via Original Antigenic Sin. This is not a crazy internet fantasy, but a well-observed limitation of human immunity. It is the primary reason that respiratory viruses like influenza return again and again. Despite multiple reinfections across the whole population, we are never quite immune to the flu, because its strategy is to exploit the way our immune systems learn.

The mechanisms of Original Antigenic Sin are not fully understood, but we have a rough idea of what might be happening. When a virus infects your body for the first time, your naive memory B cells imprint on specific virus proteins, or antigens, presented to them. These B cells then become either memory B cells or plasma cells. Forever after, they specialise in producing antibodies against those specific antigens. When a slightly mutated form of the virus arrives, these memory B-cells begin pouring forth the antibodies they learned to produce during the first infection. These antibodies bind to multiple epitopes on the virus particles, and in the process they give the slower-moving naive B-cells little chance to learn about any new, mutant virus features.

Original Antigenic Sin was most influentially described by Thomas Francis in 1960. He noted that, regardless of whatever influenza A strains were in circulation, subjects tended to have dominant antibody responses to the strains that were current in their early childhood:

The antibody of childhood is largely a response to … the virus causing the first Type A influenza infection of the lifetime. As the group grows older and subsequent infections take place, antibodies to additional families of virus are acquired. But … the antibody which is first established continues to characterize that cohort of the population throughout its life. The antibody forming mechanisms have been highly conditioned by the first stimulus, so that later infections with strains of the same type successively enhance the original antibody to maintain it at the highest level at all times in that age group. The imprint established by the original virus infection governs the antibody response thereafter. This we have called the doctrine of original antigenic sin.

An important consequence of this childhood conditioning, is that different age cohorts within the population have overlapping or layered immunity to different influenza strains. This is an important if subtle aspect of our population-wide immunity to influenza A. It looks like this: 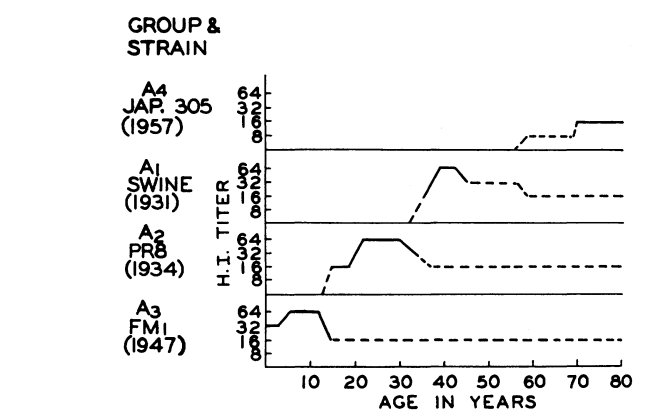 As older cohorts die, their immunity to older strains dies with them. These old strains, long suppressed, are then positioned to return, for very few human immune systems remember them any longer. Francis believed this was the mechanism underlying periodic cycles of pandemic influenza. The 1957 influenza pandemic, for example, featured a strain of flu against which only the oldest cohorts – those in their 70s – had specific antibodies. As these “immunological veterans” disappeared, this older, long-suppressed type of influenza was free to return and cause another pandemic event.

In conclusion, Francis proposed that optimised influenza vaccines might be administered to children before their first infection. He envisioned vaccines designed to confer immunity against “known or anticipated recurrent strains” and hoped that “In this manner the original sin of infection could be replaced by an initial blessing of induced immunity.”

Strategic vaccination conferring immunity against likely future strains is of course exactly the opposite of our current efforts to give every last living human multiple vaccinations against an extinct strain of SARS-2.

The existence of Original Antigenic Sin has been confirmed by generations of research, and the literature is full of curious findings. A major reason flu shots don’t work, for example, is that they are powerless to redirect adult immune systems against novel influenza strains. Most people who get flu shots are adults, with immune systems long since primed by childhood infection. Hence this old Lancet case study of influenza outbreaks among boys at Christ’s Hospital in Sussex in the 1970s:

The flu vaccines, in other words, work great if you’ve never had the flu before. Otherwise they don’t do anything.

And consider these remarks, from a 2005 article in Nature Medicine:

It is often difficult to further increase antibody levels, specificity and the quality of the immune response in individuals who have been repeatedly immunized through either vaccination or recurrent exposure to infectious agents or cross-reacting microbial antigens. This has been a particular concern for aging adults in the context of the antigenic drift of influenza virus, in view of their annual exposure to antigens of new but related influenza variants through either infection or vaccination. After exposure to a new but cross-reacting antigenic variant, such individuals may respond by producing antibodies that are primarily directed at antigens characterizing influenza viruses encountered during earlier epidemics.

The authors go on to write that the “impact” of Original Antigenic Sin “on protection is far from established,” noting earlier research showing substantial all-cause mortality reductions from flu shots. Later work, though, has shown that the mortality reduction of influenza vaccines is largely an illusion of selection effects. For a variety of reasons, those most likely to die of influenza are far less likely than healthier groups to be vaccinated.

Original Antigenic Sin has been famously implicated in dengue fever. This is considered to be an extreme case of the phenomenon, with “considerable bearing on vaccine strategies.” Here the conclusions are ominous and full of implications for our own situation:

Once a response has been established, it is unlikely that repeat boosting will be able to change its scope, meaning that balanced responses against the four virus serotypes will need to be established with the first vaccine dose.

The danger is that immunity to one strain alone may lead to permanently impaired immune response to the three other serotypes, causing worse and longer illness.

Influenza had been infecting humans for generations before anybody came up with the notion of influenza vaccines. Despite the efforts of public health authorities everywhere, most people catch the flu before they are ever vaccinated, and so flu shots have little opportunity to undermine population-wide immunity to influenza A.

The complex system constituted by SARS-CoV-2 and its interactions with the human immune system, on the other hand, remains barely understood. In chasing an empty fantasy of herd immunity, authorities are denying human populations everywhere the opportunity to develop the layered, population-wide resistance against successive SARS-2 strains that is the foundation of our immunity against other respiratory viruses. Aside from the minority that have managed to recover from natural infection before the vaccinators got to them, most humans will have their crucial, primary immune response conditioned by the spike protein of SARS-2 in its vintage 2020 configuration.

It is a near certainty that this immunity will attenuate antibody responses to the spike protein of current and future variants, forever. Mutant spike proteins will increasingly escape vaccine-conferred immunity, and breakthrough infections will elicit only partial response to the new epitopes. Insofar as the data also suggest that our vaccines will attenuate immunity to other virus proteins beyond spike, mass vaccination will lead to ever more volatile waves of infection – in exchange for limited and fading protection against severe outcomes.

The most dangerous thing to do, at this point, would be to vaccinate children. The virus is not a threat to them, and if they are infected by the new forms of SARS-2 that are sure to emerge every winter, we will begin to establish – through them and the as yet unvaccinated – the layered immunity that is the only way of coming to terms with SARS-2 in the longer term. As long as the vaccinators are permitted to continue their radical and increasingly insane campaign, though, nothing will improve. Indeed, their policies threaten to bring about a semi-permanent pandemic state for generations to come.