Mottes, Baileys, Vaccines
Vaccine efficacy against severe outcomes is the only argument they have left, and it is not enough

In 2005, Nicholas Shackel identified an insidious tactic of discourse, beloved of intellectual frauds everywhere, which he christened the Motte and the Bailey:

A Motte and Bailey castle is a medieval system of defence in which a stone tower on a mound (the Motte) is surrounded by an area of land (the Bailey) which in turn is encompassed by some sort of a barrier such as a ditch. Being dark and dank, the Motte is not a habitation of choice. The only reason for its existence is the desirability of the Bailey, which the combination of the Motte and ditch makes relatively easy to retain despite attack by marauders. When only lightly pressed, the ditch makes small numbers of attackers easy to defeat as they struggle across it: when heavily pressed the ditch is not defensible and so neither is the Bailey. Rather one retreats to the insalubrious but defensible, perhaps impregnable, Motte. Eventually the marauders give up, when one is well placed to reoccupy desirable land. 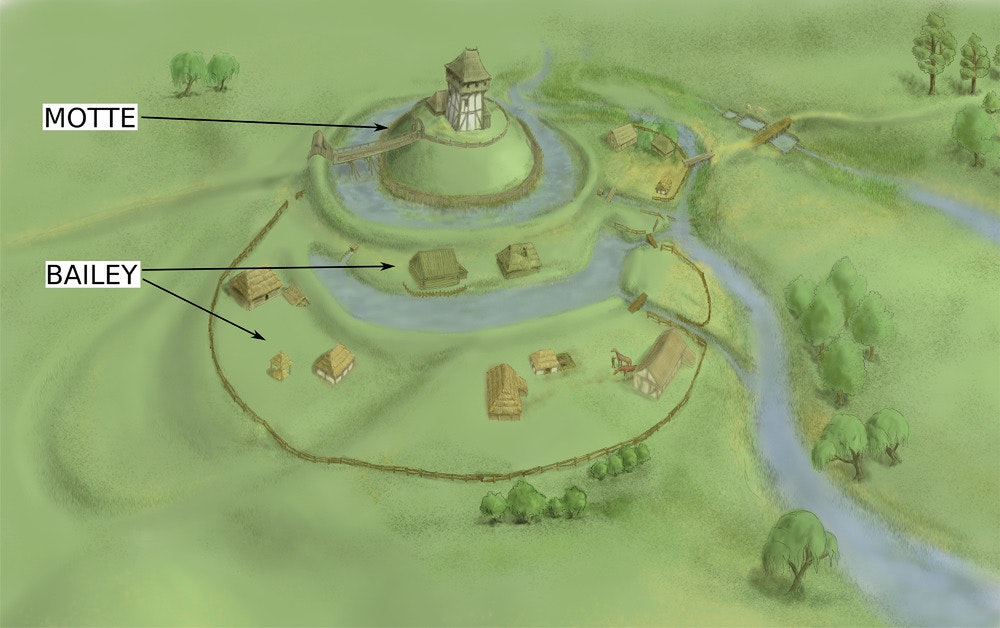 The fertile pastures of the Bailey represent “a … doctrine or position that is desirable to its proponent but only lightly defensible.“ The Motte, meanwhile, stands for “the defensible but undesired position to which one retreats when hard pressed.”

Shackel diagnosed Motte and Bailey tactics in the writings of quack postmodern philosophers like Michel Foucault, who often make extravagant claims that discourse defines or even makes reality (the Bailey), while taking refuge when challenged in more banal assertions along the lines that reality is merely described or interpreted by discourse (the Motte). Without the Bailey, Foucault wouldn’t be interesting; without the Motte, he wouldn’t have anything defensible to say.

Mottes and Baileys have become pervasive in the discourse of the vaccinators, as they find once more that their policies and their rhetoric have lost all alignment with what is actually happening. They prefer to argue that the vaccines represent an unprecedented success and our best means of defeating Corona, which is why we have to vaccinate everyone and why unvaccinated people should be excluded from public life. This is the Bailey. When pressed with the growing failure of the vaccines to stop transmission, they will accuse you of hiding the fact that the vaccinated enjoy lower rates of hospitalisation and death. They say that this is the most anyone could have hoped for and all that anybody ever wanted to achieve in the first place. This is the Motte.

All vaccine policies are rooted in the maximalist claims of the Bailey, but only the minimalist arguments of the Motte can be defended. Claims that vaccine mandates are necessary to protect hospitals are nothing but attempts to defend the Bailey from the Motte. As such they are beset by all manner of awkwardness, particularly in Western society, where people are not only allowed but even encouraged to develop long-term dependence on medical resources through sedentary habits and poor diet, all of which is still totally fine with everyone.

The most important thing, rhetorically, is to keep the vaccinators out of the Bailey and shut up in their dark little Motte, where they are forced to make arguments that, at best, support the position that vaccines should be a personal health choice for everyone and that you should talk to your doctor and see if they’re right for you. In the longer term, this strategy has the best chance of undoing green passes and de facto vaccine mandates and all the rest of it.

But we should also start to pick away at the Motte, because it is not nearly as defensible as it seems, and reality has already begun to rain heavily upon the arguments from which it is built.

It is true that the vaccines reduce the risk of serious outcomes, but by far less than is generally realised. The Public Health England report we looked at yesterday, for example, shows that fully vaccinated 80+ year-olds are about as likely to end up in the hospital as unvaccinated 60 year-olds. Vaccinated 70 year-olds, meanwhile, enjoy much greater risk reduction, with hospitalisation rates roughly equivalent to unvaccinated people in their later 30s or early 40s. 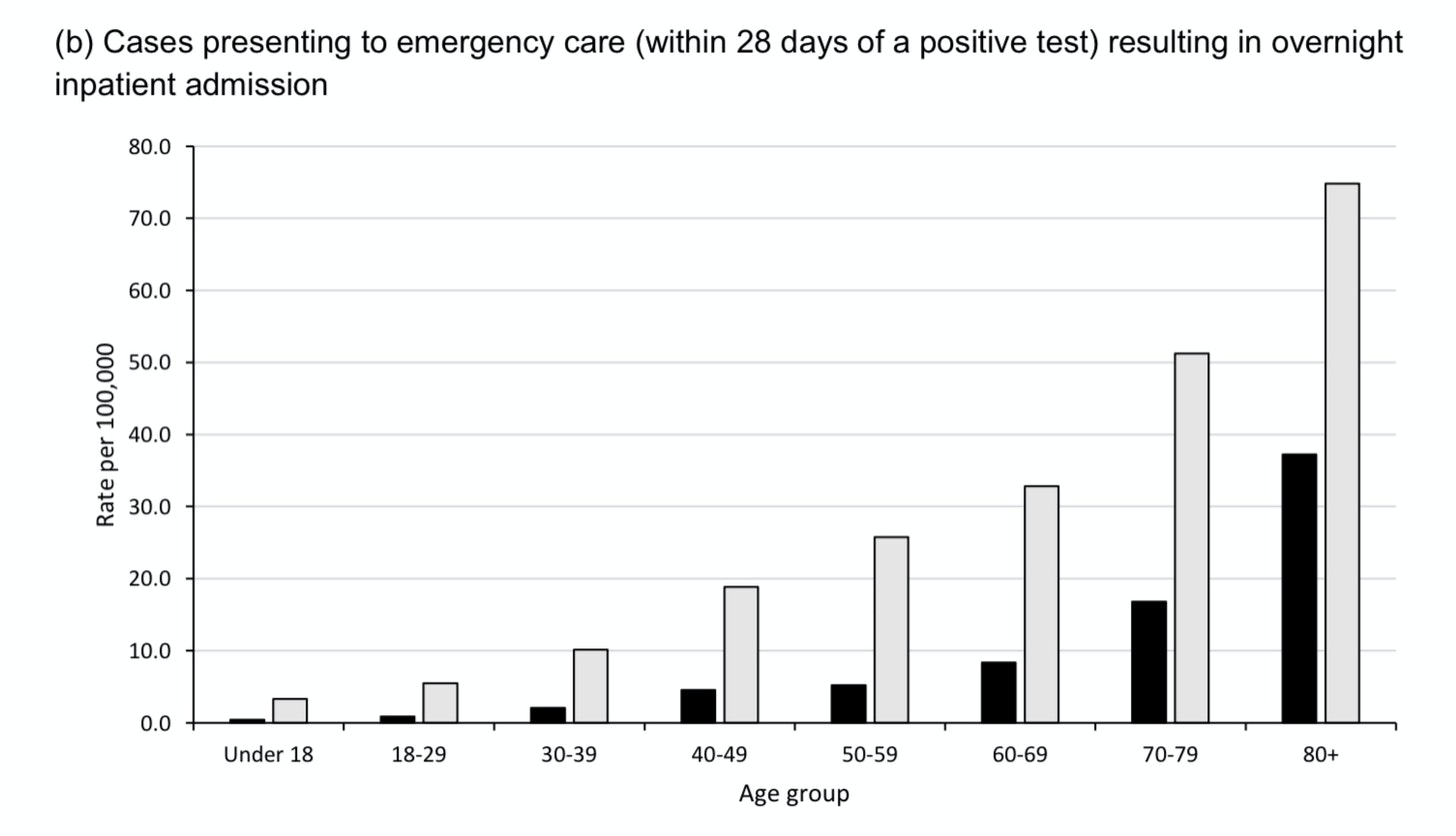 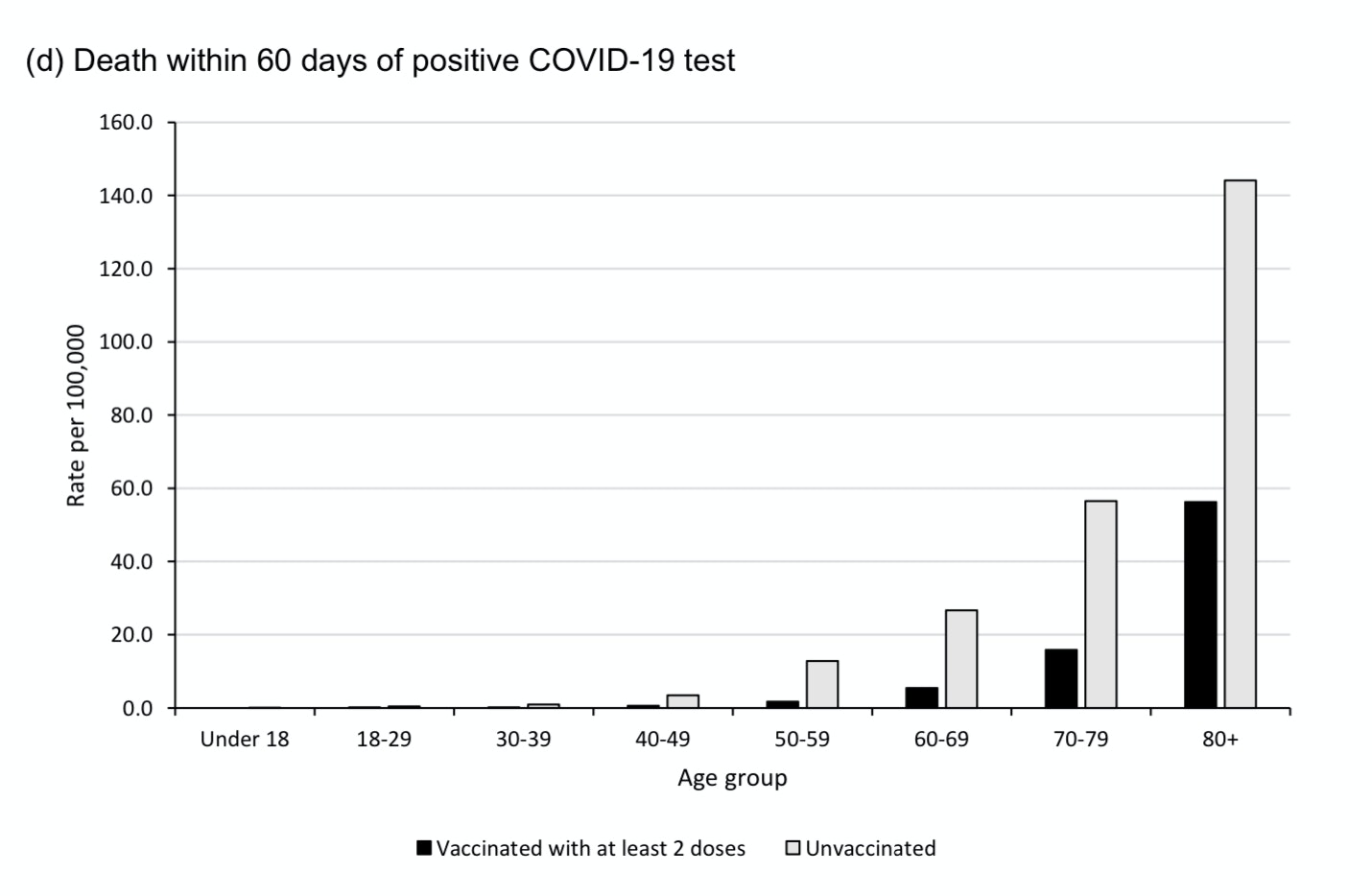 But it’s actually worse than this. What gets lost in efficacy nitpicking, is that our debate is not so much about vaccines, as it is about vaccine policies – particularly those policies demanding or encouraging universal vaccination. These policies cannot be evaluated in terms of personal health outcomes, but only in light of overall impact upon the vaccinated and unvaccinated alike.

Here, the vaccines have very mixed marks. First, consider cases in the UK: 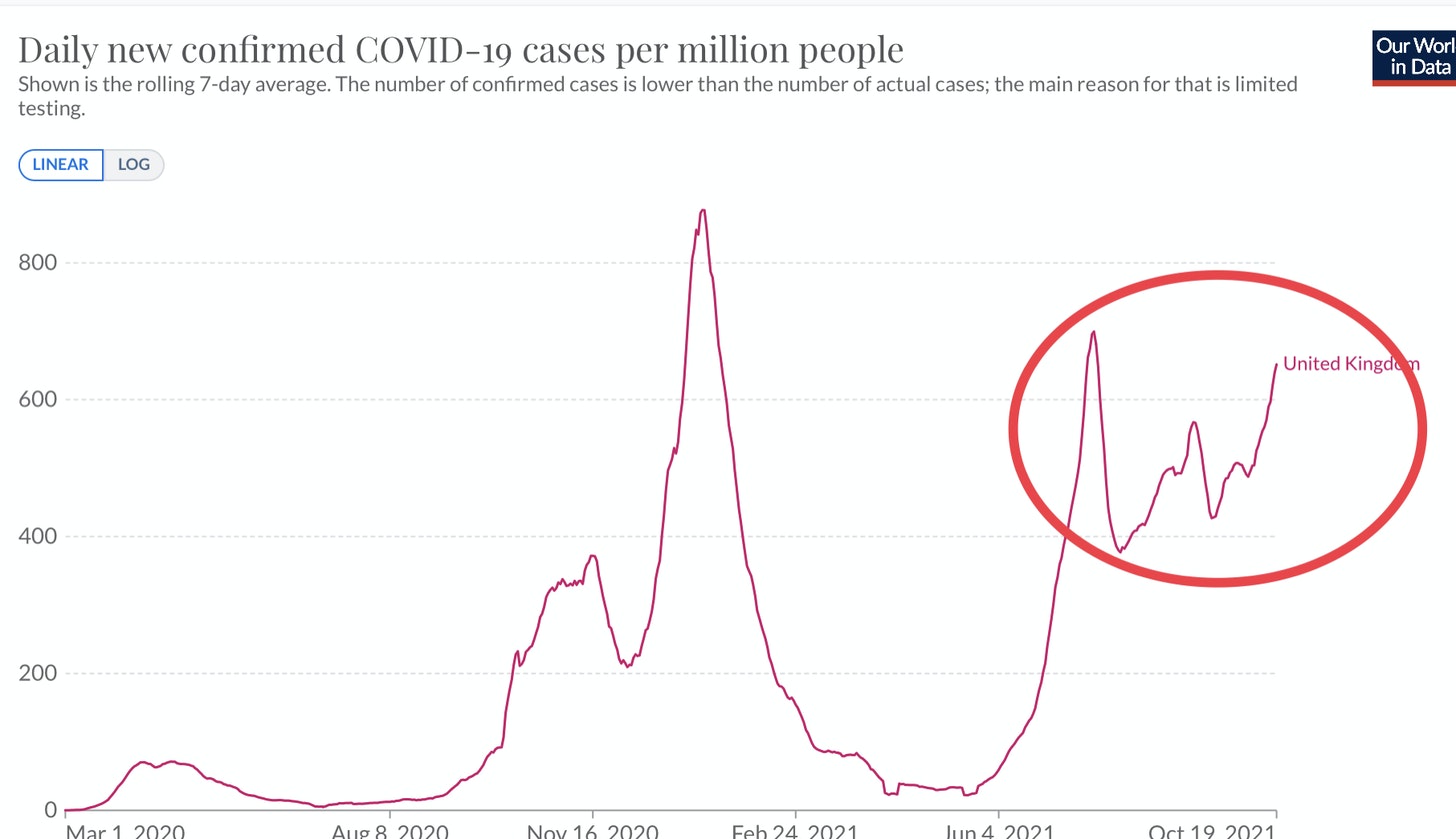 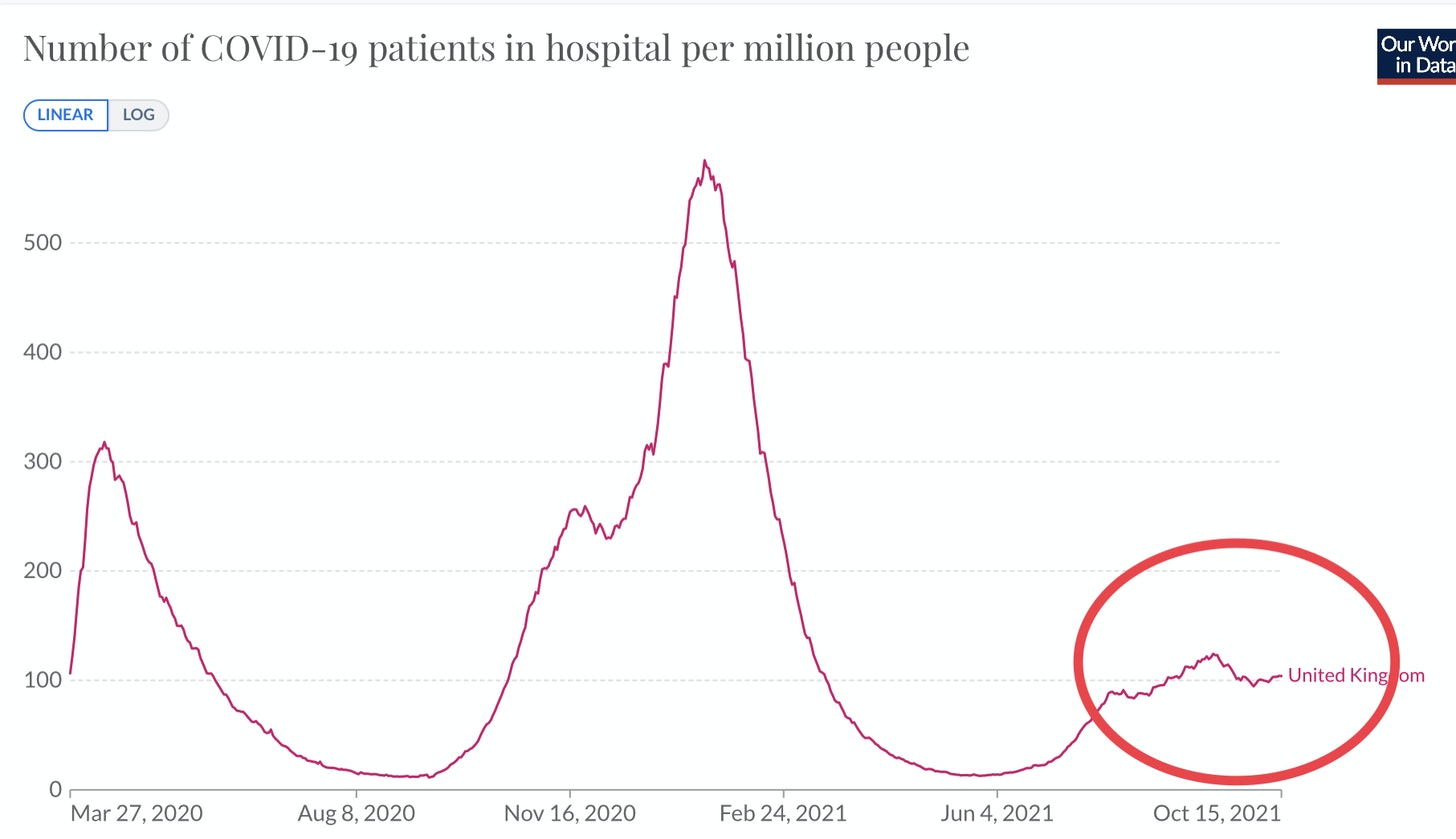 Since July (the red circles), any benefit the United Kingdom might have enjoyed from its reduced rate of hospitalisations per case on the one hand, has been totally washed out by a raw surge in case numbers on the other hand. It is not convincing to lay this surge at the feet of the variants. Neither reduced hospitalisations nor surging cases can be disentangled from the vaccines, which have probably caused vastly increased rates of spreading among the vaccinated, while also driving the evolution of more transmissible and perhaps more pathogenic SARS-2 strains.

If that uneasy plateau holds, the UK will soon be able to claim that vaccines have improved their hospitalisations over last year. To this moment, though, everything there has been just as bad or worse as it was before vaccination. Even if we can’t fully understand all of the reasons, it looks very much like the vaccines merely move risk of hospitalisation and death around, onto unvaccinated populations, while Corona evolves to retain the same level of population-wide virulence.