Omicron is not normal. No immediate progenitors are known; its closest relatives are viruses last seen in early- to mid-2020. The orthodox explanation for this awkward fact, is that it has spent the last 18 months lurking “in a geography with poor genomic surveillance … or … in a chronically infected individual.” The simpler explanation is that it leaked from a laboratory. 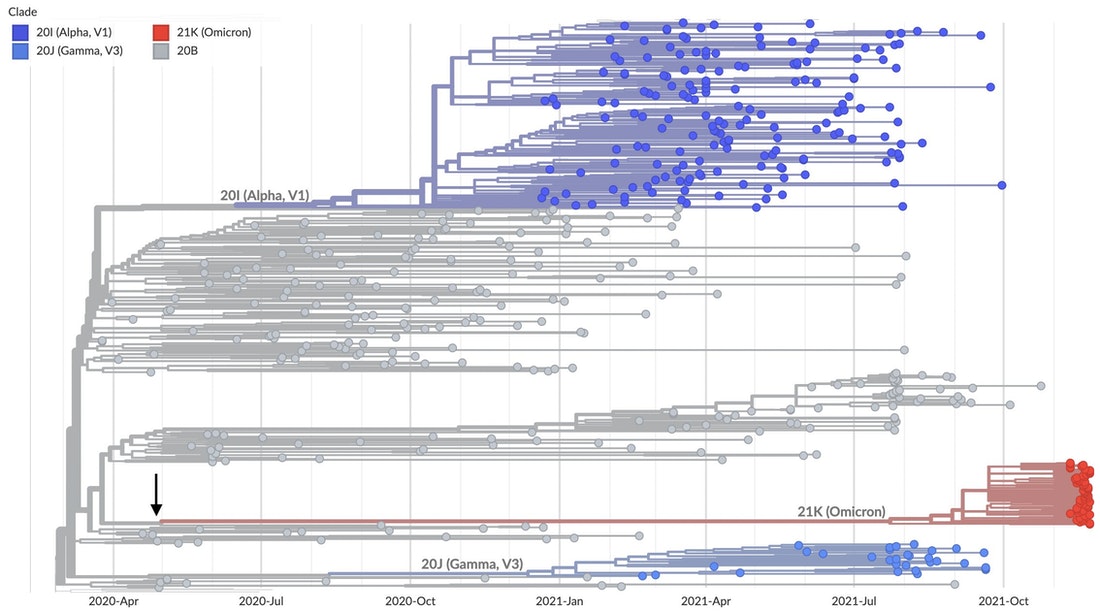 As el gato malo and others have indicated, evidence is strong that Omicron circulates preferentially in the vaccinated. In all likelihood, it is the result of gain-of-function research, in which SARS-2 was passaged repeatedly through convalescent or vaccinated plasma, in the hopes of helping the virus evade acquired immunity. The purpose of this research would be to anticipate future immune-escape variants that vaccines might target.

Omicron carries a series of highly unlikely and suspicious mutations in its spike protein. It is hard to imagine that these mutations can have arisen via natural processes, because all but one of them are nonsynonymous – that is, they code for different amino acid sequences. Starkly mutated variants favoured by natural selection should have a great many meaningless synonymous mutations as well.

Omicron’s ancestors may have spent a significant amount of time adapting to mouse cells, before re-entering human hosts. Omicron appears selected to replicate primarily in the bronchial tract. Deeper in the human lung, it functions far less efficiently than Delta or the first strains from Wuhan. This is probably why it causes mostly mild illness, and it is reminiscent of techniques used to make live attenuated influenza vaccines safer for use in humans. Such vaccines are cold-adapted, that is, selected to circulate primarily in the cooler upper respiratory tract rather than in the warmer, more vulnerable lungs.

The balance of the evidence is that Omicron leaked from a lab engaged in SARS-2 vaccine research. There are many possibilities: It might represent a live, attenuated virus vaccine used informally among researchers, that mutated back to virulence and escaped; it might have been released accidentally; it could even be an attempt to develop a self-spreading vaccine to immunise animals or third world populations.

UPDATE: Igor Chudov points to his own similar analysis from 2 December.