In September, a small study conducted by researchers at the Erasmus Medical Centre in Rotterdam looked at the antibody response of 20 severely ill Corona patients admitted to the ICU, comparing their cases to 12 mild infections and 6 negative controls. They found that the immune response of the severely ill, unlike that of the mild patients, was dominated by IgG antibodies against ordinary seasonal coronaviruses. In other words, the most severely ill patients had fewer naive B cells imprinting on SARS-CoV-2, and more memory B cells producing antibodies against the somewhat similar common coronaviruses these patients had recovered from in the past. As the authors note, this is the phenomenon of Original Antigenic Sin. The immune systems of these severely ill patients were trained, by many years of exposure to the mild alpha- and betacoronaviruses that routinely infect humans, to send these same common coronavirus antibodies against SARS-2. These antibodies were ineffective against the new virus, and they inhibited a robust naive B-cell response.

We now have a second, higher-quality study from researchers at St. Jude Children’s Research Hospital in Memphis, Tennessee, confirming and expanding upon these results. They recruited a cohort of 1,202 hospital staff, who provided an initial blood sample to establish their baseline antibodies to common coronaviruses. They were then given regular PCR tests for SARS-2 every week, regardless of symptoms. By the end of the study, 121 participants had tested positive for SARS-2, and their antibody response was compared to their prior common coronavirus antibody levels, to see what correlations could be found.

A comparison of infected participants to the 1,081 participants who remained uninfected showed that levels of common betacoronavirus antibodies did not predict the likelihood of SARS-2 infection. The numbers are small, but still – it looks like cross-immunity (at the level of antibodies, anyway) won’t protect you against infection.

Study participants were generally younger, and almost none of them suffered severe disease. To see how the severity of infection might nevertheless correlate with prior common coronavirus antibody levels, the authors decided to use the antibody response to SARS-2 as a proxy for severity of infection. They assumed (reasonably: or not: see UPDATE) that the more antibodies your body produces in response to SARS-2, the greater your exposure to the replicating virus, and the more severe your infection. They found that higher levels of IgG antibodies to the common betacoronavirus HCoV OC43 corresponded to increased post-infection IgG antibodies against SARS-2. The more OC43 antibodies you have in your blood before SARS-2 gets you, in other words, the more freely SARS-2 can replicate in your body. We see again that the memory response to OC43 interferes with the ability of naive B cells to imprint upon and develop a more specific and effective antibody response to Corona.

The study authors then went a step further, and immunised a bunch of mice, first, with one of the four common coronavirus spike proteins, or with SARS-2 spike; and then again with the SARS-2 spike. Then they measured their antibody response. They found that “Prior immunization with” common coronavirus “spike proteins did not significantly impact antibody levels to SARS-CoV-2 full length spike…

The point is a little complicated, but important, so it’s worth having a look at Figure 7, which illustrates these results. 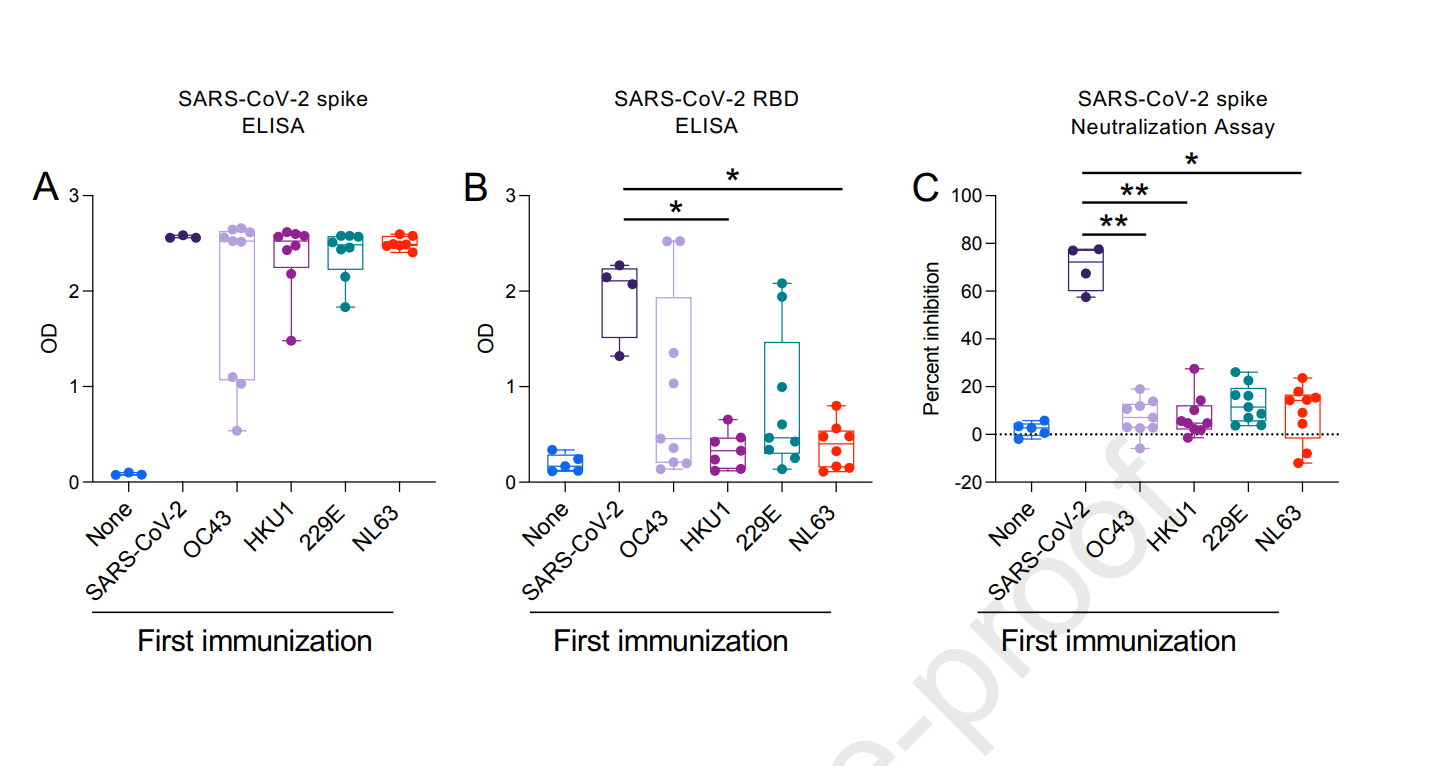 The severity of Corona infection varies wildly across the population. Children have generally mild or asymptomatic infections, while adults have a wide range of responses. Everyone always assumed that cross-immunity was part of the answer to this conundrum. The problem is that – at least as far as antibodies go – it is shaping up to be a not very reassuring part of that answer. The innate and non-specific immune response of children looks more and more like a big part of the reason they are spared severe infection. Adults with immune systems tightly calibrated to the common human coronaviruses, meanwhile, often have more severe symptoms. They suffer from Original Antigenic Sin.

Over 4.2 billion people across the earth have received at least one dose of vaccine against SARS-2. The majority of these vaccines have elicited antibodies only against an early form of the spike protein that is no longer in circulation.

This would seem to be one reason why many western countries with high vaccination rates appear to have locked themselves into an indefinite phase of heightened SARS-2 transmission. In the United Kingdom, 96% of adults have antibodies to the spike protein – most of these first acquired by vaccination. Shortly after they concluded their vaccination campaign, cases skyrocketed, and they have remained high ever since. 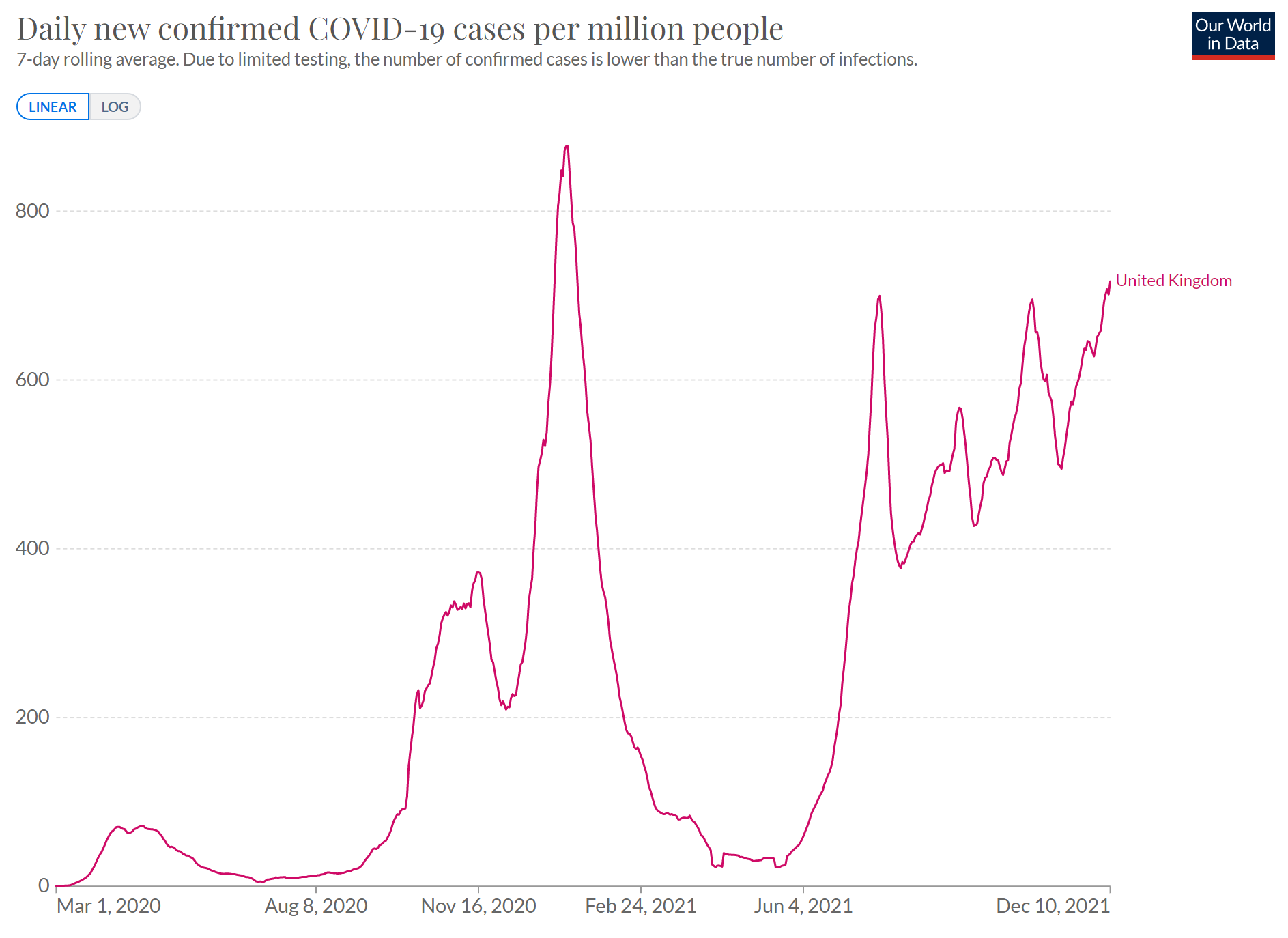 Original Antigenic Sin is a real phenomenon. It seems not only to permanently influence the immune response to the spike protein itself, but also to inhibit the development of antibodies to other SARS-2 proteins. A worst case scenario, would be a future spike mutation that entirely escapes the anti-spike antibodies elicited by our vaccines. In this case, it seems possible that many vaccinated people will be stuck with permanently suboptimal immune responses. If Omicron is indeed circulating primarily among the vaccinated, as some data suggests, this would seem to be one possibly reason why. These concerns are particularly acute in the case of children, who may well be exposed to the risk of very serious illness in the future, if vaccination permanently misdirects their immune system.

UPDATE: Commenter Jon and the irascible Brian Mowrey (who writes Unglossed) object, not without reason, to this method of determining a finer, stratified infection severity among many non-severe outcomes, as likely circular. The results of the Rotterdam study, of the mice vaccinations, and other evidence for Original Antigenic Sin all stand.