Preprint: "The SARS-CoV-2 Delta variant is poised to acquire complete resistance to vaccines"
When it escapes, vaccine-induced antibodies to legacy spike will enhance infectiousness.

A pre-print by researchers at Osaka University in Japan studies the specifics of Delta immune-escape adaptations, and brings more ominous news: The Delta strains now circulating have obvious vaccine-escape adaptations. In some ways, these adaptations have enhanced the potential infectiousness of Delta. But this potential has not yet been realised, because the Delta spike protein has not fully escaped. When that escape does happen, antibodies against legacy spike elicited by the BioNTech/Pfizer vaccines will probably enhance Delta’s transmissibility.

To understand how this can be true, we must take a closer look at spike: 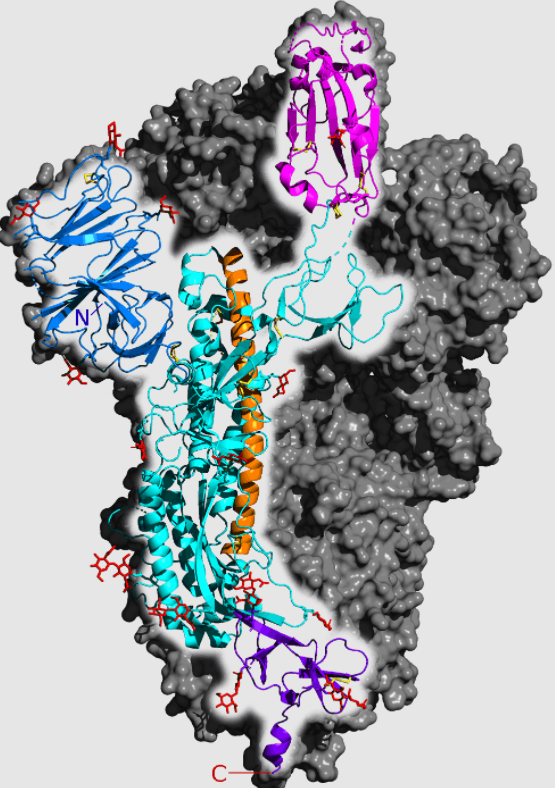 The pink/magenta region at the top is the ACE2 receptor binding domain, or RBD. The RBD interacts with the ACE2 protein expressed by cells in our lungs. Think of it as a key that SARS-2 uses to enter your cells. The vaccines elicit anti-RBD antibodies that interfere with ACE2 interactions. It’s the equivalent of changing your locks, and now Delta has been forced to try a different key: It has two distinctive RBD mutations, but these mutations are not unique to Delta. We also find them in other variants, which are less successful than Delta, so it looks like they’re not crucial to Delta’s success.

The preprint researchers note, however, that Delta appears to have special, unique enhancements to the N-terminal domain (NTD), which is the blue area on the upper left of this spike diagram. “This suggests,” they say, “that mutations in the NTD may play a key role in the high infectivity of the Delta variant.”

Our vaccines elicit antibodies against both of these domains, but so far most attention has been directed against anti-RBD antibodies. Researchers, however, have shown that antibodies against the (blue) NTD play an equally crucial role, and that the wrong anti-NTD antibodies change the configuration of the RBD and actually enhance its capacity to bind to ACE2. Here a simple schematic from another article by the Osaka researchers:

Basically, SARS-2 virions have receptor binding domains that are not fully optimised always and everywhere for binding to ACE2. The right kinds of antibodies, however, can force the NTD and then the RBD into a more ideal configuration and enhance infectiousness, as you see on the right side of this image.

Back to the preprint. The authors ask how our vaccine antibodies against legacy spike hold up to the new and improved Delta NTD:

Remember, we are still talking about a single domain in the complex spike protein: There are other antibodies to RBD that still disadvantage Delta. The net effect is still that all of these antibodies, added together – particularly those against the RBD – hurt rather than help.

There are, however, Delta strains with key escape RBD mutations. The authors of this preprint find that four such mutations, already out there in various Delta sub-strains, are sufficient for Delta to evade the anti-RBD antibodies more or less completely.

UPDATE: Some objections about the in vitro approach of the study authors by Brian Mowrey (who writes Unglossed) in comments here. While I don’t share all of his reservations, he’s right that the significance of these findings for the broader immune response of the vaccinated to potential future Delta escape strains is unclear.