The Chinese Outbreak Began in Spring 2019
A look at the Internet 2.0 report on 2019 PCR equipment purchases in Hubei

A few weeks ago, this report by a security organisation calling themselves Internet 2.0 hit the news. Its authors assemble data on procurement contracts issued for PCR testing equipment in China. Alongside an unsurprising trend of increasing reliance on polymerase chain reaction tests since 2010, they find an enormous spike in the purchase of PCR testing supplies in Hubei province beginning around May 2019.

The report has been widely discussed in the media, complete with sad, limp-wristed attempts to wave away the findings by the usual suspects:

Dr. Amesh Adalja, a senior scholar at Johns Hopkins Center for Health Security, said hedidn’t know why purchases in Hubei province specifically had increased at the time.But he said it wasn’t so surprising because in general purchases of PCR equipment have been growing, even pre-Covid, as it has become “the methodology of choice for pathogen detection.”

Adalja, whose work focuses on emerging infectious disease and pandemic preparedness, said the data wasn’t specific enough to sway the conversation on Covid’s origins. “I don’t think it adds anything plus or minus,” he said. “It’s not enough.”

The Center for Health Security is the same operation that partnered with the World Economic Forum and the Bill and Melinda Gates Foundation in October 2019 to bring you the bizarrely prophetic Event 201, by the way. You can’t trust anything these people say.

In fact the Internet 2.0 report goes well beyond demonstrating a simple surge in purchasing, with highly intriguing information about which agencies were buying the tests and when. Consider this year-on-year overview of PCR equipment procurement contracts in Hubei, broken down by “Use Requirement,” or purchasing agency: 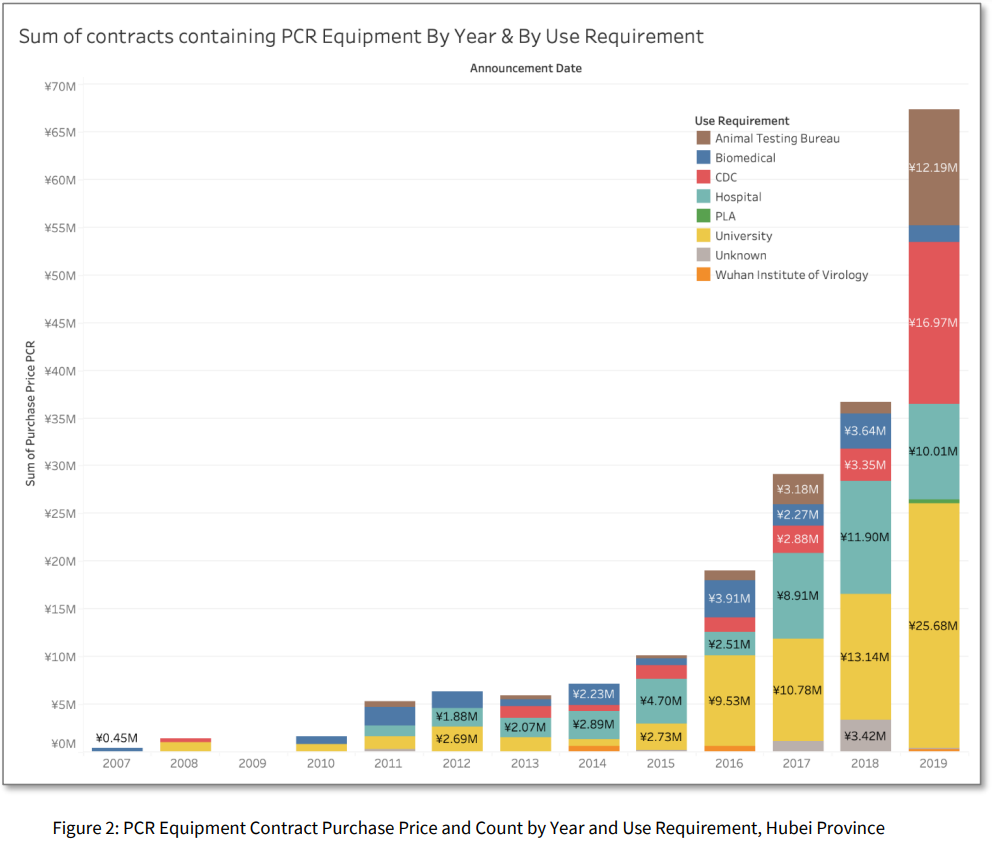 The volume of money spent on PCR supplies in Hubei increased dramatically in 2019, but that’s not even half the story. Look at the sudden, tectonic shift in the organisations involved. In earlier years, the Wuhan Centre for Disease Control and the Institute of Animal Husbandry and Veterinary Medicine had been bit players, but in 2019 both began spending some of the largest sums on PCR testing in the province, dwarfing hospital spending for the first time. This would be consistent with a massive disease surveillance effort in 2019 – in contrast to prior years, when PCR testing was driven primarily by hospitals and university researchers.

The report authors also provide a month-by-month view of who was dispensing contracts, and when: 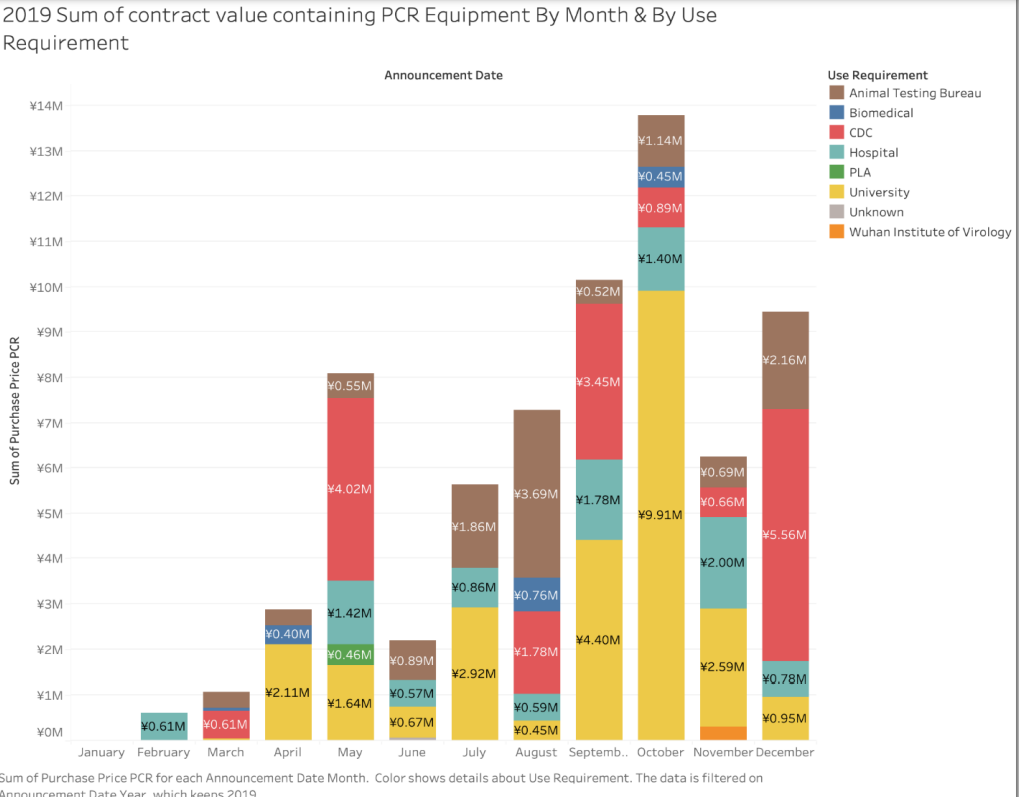 Here we see an initial spike in May, driven mostly by the Wuhan CDC and hospitals. This is followed by substantial animal testing in July and August, and finally massive university laboratory testing in October. Last in line is the Wuhan Institute of Virology, which placed orders in November, as their own researchers became infected. There is a whole story in this data: Efforts to diagnose and isolate the earliest patients in May were followed by a campaign to identify plausible animal reservoirs through the summer. Universities got in on the game relatively late, and hospital testing remained elevated from September, as Hubei entered respiratory virus season.

Chinese public health authorities, on guard since 2004 about a resurgence of SARS, would have administered either SARS or more generic SARS-related PCR tests to early viral pneumonia patients. There was likely widespread knowledge within the Hubei public health bureaucracy of an ongoing SARS-related virus outbreak from spring at the latest. This would explain why Christian Drosten and his team at the Charité in Berlin were able to begin building the first PCR test for the novel Coronavirus in early January 2020, before the virus had even been officially sequenced. The Chinese had been using generic SARS-related virus PCR tests to track infections for months, and he simply threw together a similar test that western scientists and media would find credible. (Of course Drosten and friends were unable to explain how they knew it was a SARS-related virus, awkwardly explaining that this was an assumption they had made based on “social media reports”.)

UPDATE: A friend points me to this investigation of Wuhan Institute of Virology virus sample databases going dark after 12 September 2019.

On the 12th Sep 2019, the main database of samples and viral sequences of the Wuhan Institute of Virology went offline. Eventually every single one of the 16 virus databases managed by the WIV was taken offline. Here we show how these databases may provide essential clues at to the origins of SARS-CoV-2 and review the circumstances in which they were taken offline.

Reduced posting frequency this week due to professional obligations (an academic conference). In the coming days, things will get back to normal.