The Myth of Technological Progress

From the Takimag article on August 30, 2009, by Scott Locklin. Also see his Wordpress article.

Many of you will still be alive in 50 years. It’s interesting to think about what life will be like in 50 years technologically and otherwise. Predictions are risky, especially when they’re about the future, but I believe we can make some pretty good guesses. To predict a predictable future, you need to look at the past. What was technological life like 50 years ago? 50 years ago was 1959. The world of 1959 is pretty much the same world we live in today technologically speaking. This is a vaguely horrifying fact which is little appreciated. In 1959, we had computers, international telephony, advanced programming languages like Lisp, which remains the most advanced programming language, routine commercial jet flight, atomic power, internal combustion engines about the same as modern ones, supersonic fighter planes, television and the transistor.

I’d go so far as to say that the main technological innovation since 1959 has been space flight, a technology we’ve mostly abandoned, and its daughter technology—microelectronics. Computer networks came a year or two after 1959 and didn’t change very much, other than how we waste time in the office, and whom advertisers pay.

Other than that, man’s power over nature remains much the same. Most of the “advances” we have had since then are refinements and democratization of technologies. Nowadays, even the little people have access to computers and jet flight, and 1800s-style technology like telegraphy can be used to download pornography into their homes. Certainly more people are involved in “technological” jobs, and certainly computers have increased our abilities to process information, but ultimately very little has changed.

Now, if we’re sitting in unfashionable 1959 and doing this same comparison, things are a good deal different.

The rate of change between 1959 and 1909 is nothing short of spectacular. In that 50 years, humanity invented jet aircraft, supersonic flight, fuel-injected internal-combustion engines, the atomic bomb, the hydrogen bomb, space flight, gas warfare, nuclear power, the tank, antibiotics, the polio vaccine, radio; and these are just a few items off the top of my head. You might try to assert that this was a particularly good era for technological progress, but the era between 1859 and 1909 was a similar explosion in creativity and progress, as was the 50 years before that, at the dawn of the Industrial revolution. You can read all about it in Charles Murray’s Human Accomplishment: The Pursuit of Excellence in the Arts and Sciences, 800 B.C. to 1950, though I warn you, if you’re in a creative or technical profession Murray’s widely ignored book is even more depressing than this essay. Murray didn’t restrict his attentions to technological progress: across the entire panoply of human endeavor (art, science, literature, philosophy, Mathematics) the indications are grim. You may disagree with the statistical technique he used (I don’t), but you can’t escape the conclusion—things are slowing down.

Certainly, people can be forgiven for thinking we live in a time of great progress, since semiconductor lithography has improved over the years, giving us faster and more portable computers. But can we really do anything with computers now that we couldn’t have done 30 or even 50 years ago? I don’t think life is much different because of ubiquitous computers. Possibly more efficient and convenient, but not radically different, much like things got after the invention of computers in the 40s. Now we just waste time in the office in different ways.

Remember the kind of “artificial intelligence” which was supposed to give us artificial brains we could talk to by now? The only parts of which work look suspiciously like signal processing ideas from, well, the 1950s. The rest of it appears to have degenerated into a sort of secular religion for nerds. 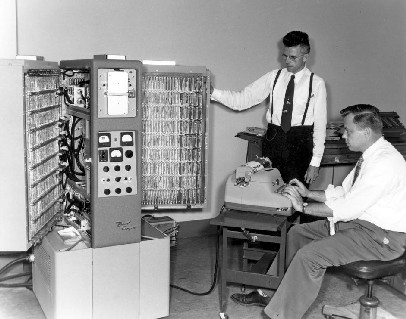 Looking forward, I can’t think of a single technology in the works today which will revolutionize life in the 21st century. In the 1930s, there were dozens of obvious ones; you could read about them in magazines and science fiction. Now … I don’t know … biotech. Maybe. Making insulin in toilet water is a neat trick, but all that really does is allow fat people to eat more sugar without slaughtering horses and pigs. I suppose some of the genetically engineered crops are impressive, though the birds-and-bunnies people tell me they are a bad idea. Some wise acre is likely to pipe up and sing the glories of “Nanotech,” a “subject” which was “invented” in K. Eric Drexler‘s Ph.D. thesis in 1989. In the 20 years since he penned his fanciful little story, we have yet to see a single example of the wondrous miniature perpetual motion machines Drexler has been promising us “real soon now.” I wonder what his timeline for delivery of this “technology” will be?

Presumably some time well after his retirement. I’ll go out on a limb: since we don’t even have computers that can program themselves in any useful fashion, the probability of anyone inventing self replicating miniature robots to give us magical powers (or any kind of powers) by 2059 is approximately zero. The very idea that we’re banking on a glorious future … powered by magical robotic germs seems to me a titanic failure in human imagination. Once upon a time, we dreamed about giant stately space dirigibles to bring us to strange new worlds. Drexler dreams about inventing mechanical bacteria.

Need more evidence? Let’s look at aerospace. The SR-71 was designed in 1959. It took about two years to get the thing deployed, and it remains a faster jet than the F-22, which cost a lot more and took a lot longer to develop—first design was in 1986, first deployment in 1997. Sure, these aircraft aren’t made to do the same thing, but there is little apparent progress here: both represent the best we’ve got of respective eras.

This is despite the fact that the SR-71 was mostly designed with a paper and slide rule, and the F-22 with the most modern CAD design technology. Perhaps you consider this a bad comparison? OK, let’s consider the lowly passenger jet. The 747, a revolutionary passenger jet, was a concept in 1966. It was flying in 1968. The 787, which is not a revolutionary passenger jet, but one designed to be merely cheaper to operate, has been “in development” since 2004. It’s now 2009, and still no 787s.

Speaking of jets, I had a chance to fly on the Concorde for a reasonable price, and I passed it up out of misguided thrift. As a result I shall very likely never have the opportunity to fly a supersonic passenger flight, unless the Russians revive theirs. If this isn’t technological regress, I don’t know what is.

Are cars better? They are certainly safer, and it’s easier to buy a very high performance car than it was in 1959, but they don’t get much more efficient than they were in 1959. The Nash metropolitan got 40-mpg in real world driving tests, much like the overrated hair shirt Toyota Prius.

Medicine? Surgical techniques are unarguably better now than 50 years ago, but they’re not terribly different either. And compared to what was developed 50 years prior, not so impressive. I hope humans can learn to do amazing things like grow new livers in 50 years, but I’m not optimistic at the prospects. Drugs? I can’t think of anything in the last 50 years which was as cataclysmic as the invention of antibiotics. Most of the drugs since then have done little more than give people excuses to behave badly. We’re certainly not any healthier now, just more dependent on medical intervention to keep us alive and functioning. People may blame the pill for the sexual revolution, but there were even more effective contraception techniques used for decades before then. Really, the sexual revolution happened because of antibiotics. Before antibiotics, people died from being promiscuous. Syphilis and gonorrhea were lethal, and when they didn’t kill you, these diseases would often cripple or blind their offspring.

Nowadays, all this is forgotten. People who believe in evolution with every fiber of their being seem confused as to where those antiquated sexual mores come from. Well, that’s where it comes from, dummies—biology. Antibiotics and the non-lethal promiscuity they’ve allowed have helped us to discover less-lethal viral plagues, which I suppose is progress of a sort. Similarly, the invention of SSRI’s have allowed entire populations to make terrible life choices and not feel badly about them.

Anti-psychotics have made it possible for psychotic people to avoid the madhouse. This is probably great news if you’re a psychotic, but I can’t really look at it as an improvement in things for the rest of us who have to live with psychotics and hope they take their medicine! Should they actually invent new cures for human stupidity, I have no doubt that people will find ways to behave badly, and there will be very little practical differences in how people actually live, other than making it less pleasant for decent people to live in. I’d love to be wrong about all this, but history isn’t encouraging.

Telephones are better than they were in 1959, but the use of cell phones hasn’t really changed much. If you’re far from civilization, you will have no dial tone. If you were far from civilization in 1959, you will have no pay phone. Call me a luddite, but I can’t see the ability to email each other snapshots from our phones as being particularly revolutionary, or even desirable. Nor is the expectation that I can be reached at all hours at any location on earth an improvement in things.

Space flight is almost too depressing to contemplate. Sure, it peaked 40 years ago rather than more than 50 years ago, but it is abundantly obvious that we’re not going back to the moon that was so easily reached in 1969. Leaders of the West who allow this to continue resemble Hongxi, the fool emperor who burned the great Chinese Exploratory Armada of Zheng He. Hongxi thought the Chinese exploration program was a waste of money, and decided to invest in social programs. Sure, his reign was seen as a glorious silver age of backsheesh for the people, but he didn’t invest in China’s future, and China began to rot from within from that day until just a few years ago. Oh, I wish those delightful Internet billionaires good fortune in their various hobbies designed to get human beings, rather than government bureaucrats, back into space.

I also hope the Chinese will take up their national honor where Zheng He left off. I’m just not very optimistic about the prospects, because we’ve done so horribly badly at this in the last 40 years. Watching poor Buzz Aldrin, world bestriding colossus of my youth, jet around the world begging people to take an interest in this sort of thing fills me with intense sadness for what we have lost.

We are not living in a time of technical decline exactly, but we are also not living in a time of great progress. As such, I don’t think the world of 50 years hence will look very technologically different from the world now. Our rate of progress is fairly small, and I’m not the only one to notice. This is despite the fact that there are more technologists alive now than ever lived in human history before. Some people argue that this is because prior generations did, “the easy stuff,” leaving nothing for modern people to do. I think this is untrue. None of it was easy; it only looks that way after it is done. I could come up with all kinds of reasons why modern technologists aren’t as good as they were: rotten educational facilities, modern tort law, endless bureaucracy, the death of the lone inventor. But in the end, a Kipling couplet will suffice:

None too learned, but nobly bold,
Into the fight went our fathers of old.