The Vaccines Cannot Do What Is Asked of Them
A universalising pandemic ideology blinds our leaders to the strategic possibilities open to them, and compels one policy failure after the other

Increasingly, politicians and medical bureaucrats are entranced by a bizarre pandemic ideology. Like most ideologies, it remains oblivious to evidence and argument, holding that the risk of severe outcomes from Corona infection is far more evenly distributed across the population than it is; and allowing only universal solutions, such as quarantining and vaccinating entire populations. These obtuse views, which just won’t go away, are at the root of our failed and destructive policies. For 20 months now, this pandemic ideology has blinded everyone in charge to the possibility of shielding the vulnerable, leveraging seasonal patterns in infection, and leaving the kids alone. The stratified nature of Corona risk is the key to unravelling the pandemic, and it’s the one thing nobody will recognise.

Success in the pandemic has come to be defined by a series of vague, poorly differentiated statistics, including above all Corona infections, hospitalisations and deaths, and now vaccination rates. In their exclusive focus on these numbers, the press propagate constantly the myth that this is all there is to know about Corona. This impoverished discussion drives bureaucrats and politicians to seek solutions for one vague meaningless metric (Corona ICU admissions) in another vague meaningless metric (vaccination rates). In this way their policies are constructed in a rhetorical world that has very little to do with what is actually happening.

Every day our understanding of what the vaccines can do becomes clearer. It’s not nothing, but it’s much less than we were promised.

Some of our best evidence so far comes from this Swedish retrospective cohort study, which tracks outcomes in 1,684,958 individuals (matched vaccinated and unvaccinated pairs) from 12 January to 4 October 2021. It has been around the block, with an especially good analysis by El Gato Malo, so there’s no point in anything more than a brief review here.

Above all, they find that the vaccines provide temporary protection against infection: 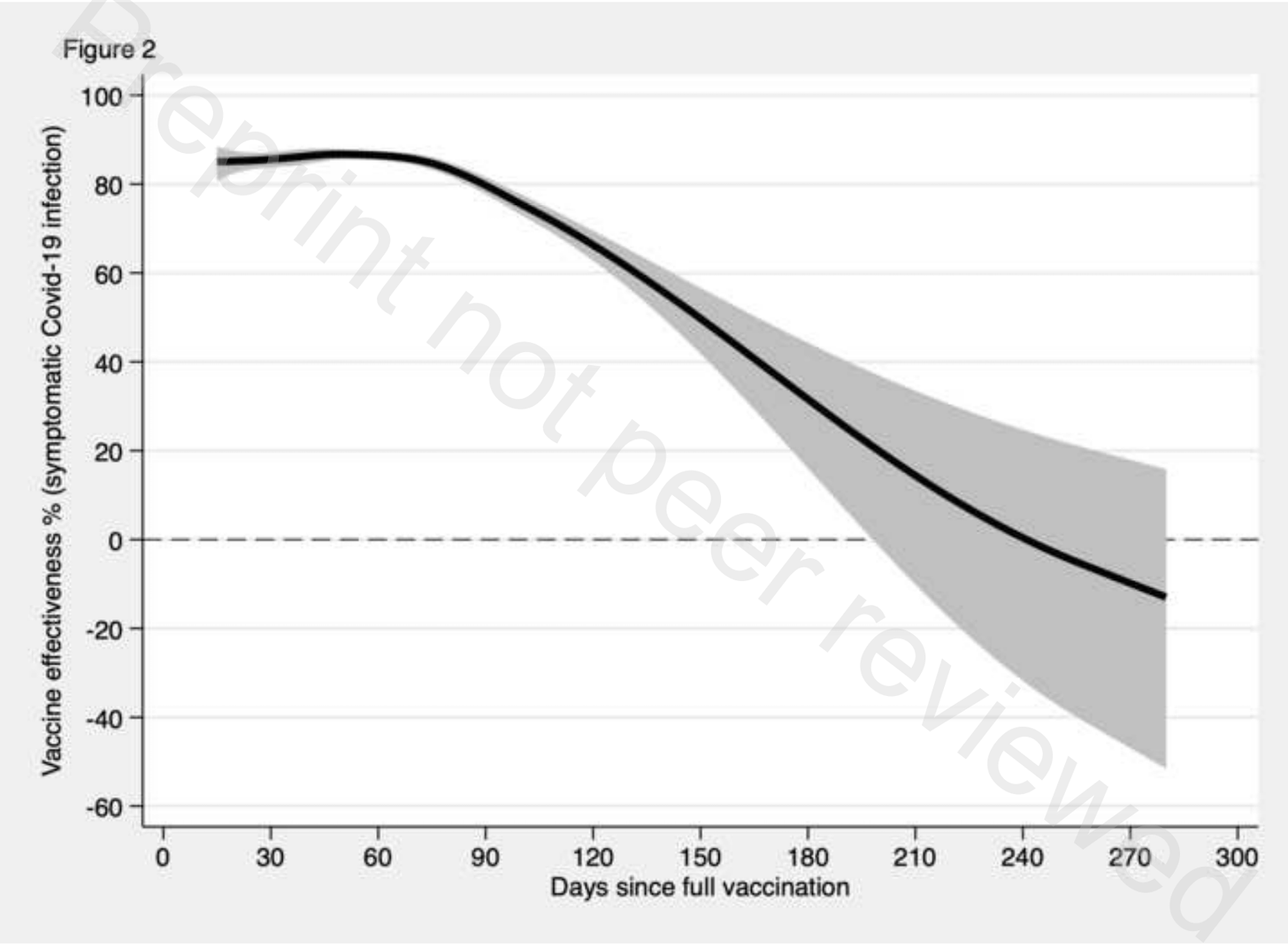 Unfortunately, this protection likely falls below zero – into the zone of negative efficacy – after 7 to 9 months. This is one of multiple lines of evidence confirming that the vaccinated, sooner or later, achieve higher rates of infection than the unvaccinated. According to me, even early vaccine efficacy is likely overstated in studies like these. Probably the vaccinated are always highly vulnerable to infection, but they’re not tested as rigorously and at first their symptoms are so mild as to be nearly unnoticeable. SARS-2 nevertheless lurks among them, mostly undetected, until vaccine protection against overt disease dissipates.

This would explain what happened in Iceland over the summer: A bunch of freshly vaccinated Icelanders went on holiday in the UK, where they promptly picked up SARS-2 and brought the latest Delta update back home with them. In the following weeks, energetic Icelandic testing uncovered rates of infection almost as high in the vaccinated as in the unvaccinated – and this well before we would’ve expected the vaccines to have faded.

The Swedish study finds that efficacy against severe disease last longer, but also decays substantially in much the same way: 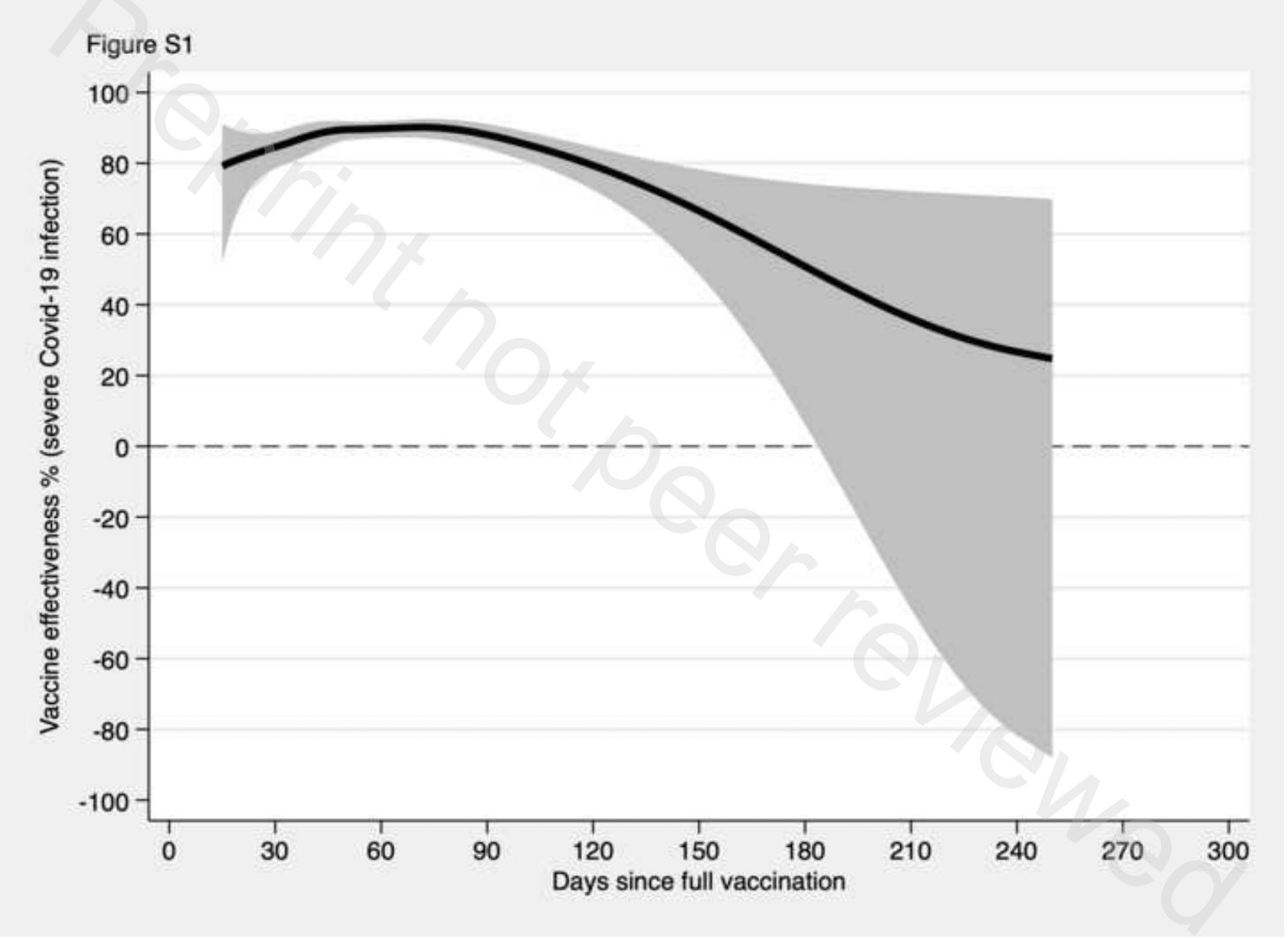 After the 240-day mark, protection against severe outcome is not even at 30%. The decay is most rapid among men, the old and frail, and those with comorbidities – precisely those subpopulations already at greatest risk of severe disease.

So those are the benefits, but as in everything there are also costs – and here they turn out to be substantial.

We’ve already touched on one: The vaccines appear to induce negative efficacy against infection. This probably arises from a combination of minimally symptomatic super-spreading among the vaccinated, the selective pressure that vaccine-elicited antibodies place upon the virus, and the narrow immunity against an obsolete arrangement of the spike protein that the vaccines confer. For a period of several weeks after dose 1 (and likely dose 3), they also make the vaccinated more susceptible to infection, and mass vaccination campaigns have induced case spikes across many countries.

By now it is also clear that the vaccines cause a range of adverse reactions. The best documented is myocarditis in young men, a side effect observed most frequently after dose 2 of the mRNA vaccines. We probably won’t know the true rate of vaccine-induced myocarditis for many years. From excess mortality in younger cohorts and many anecdotal media reports, we can surmise that it is much more common than anybody will admit.

It does not take a Ph.D. in public health to extract a sensible vaccination policy from all this:

1. There is just no question that vaccinating low-risk cohorts (including the recovered) is not only pointless, but also dangerous. These aren’t the people who end up in the hospital dying of Corona anyway. And because the vaccinated sooner or later end up driving transmission, there is only downside and no upside here.

3. In these groups, carefully timed annual vaccinations, like flu shots, might well provide good protection at the height of the winter coronavirus season and limit mortality. Even here, though, you’d have to proceed carefully, to avoid causing case spikes in the newly vaccinated during that brief period where their vulnerability to infection is heightened.

Of course, this is the opposite of what our pandemic ideology permits. Instead, almost all of our governments deploy the vaccines in the most reckless and counterproductive ways possible.

The southern districts of Bavaria are quickly becoming the regions of highest infection in Germany, and Markus Söder, our governor, is demanding a renewed “vaccine push,” including a campaign for booster doses “independently of age,” even obliquely threatening lockdown if we can’t ensure the “safety and stability” of hospitals.

These are exactly the kinds of crackpot universalist solutions that have failed for the past twenty months, and that will do nothing to unburden our healthcare facilities, and very likely end up swamping them with unnecessary patients.

If booster doses are a good idea for anyone – and it’s far from clear they are – it’s frail nursing home residents, most of whose vaccinations are now well past their expiration date, and who are once again beginning to die of SARS-2 just as they did last fall. Vaccinating children and triple vaccinating low-risk adults won’t prevent nursing home deaths, and it will do very little to keep our hospitals “safe,” because the vaccines don’t reduce spread and these people rarely end up in hospital. What is worse, ever newer pushes to vaccinate all hospital personnel and nursing home staff threaten to introduce vaccinated super-spreaders into these sensitive environments. Söder will continue to pound the table demanding ever harsher restrictions for the unvaccinated and more vaccine doses for the already-vaccinated, all while deaths and hospitalisations continue to climb.

Ultimately, the great problem with our vaccine policies, as with our lockdowns, arises from the fact that they don’t work. Because lockdowns and vaccination campaigns are powerless to remove the conditions that brought them about, you can never stop locking down, and you can never stop vaccinating – even as your policies turn out to do worse than nothing.