There isn't one plan, there are fifty thousand, and nobody is in charge
More thoughts on conspiracies, now that I’ve angered many readers 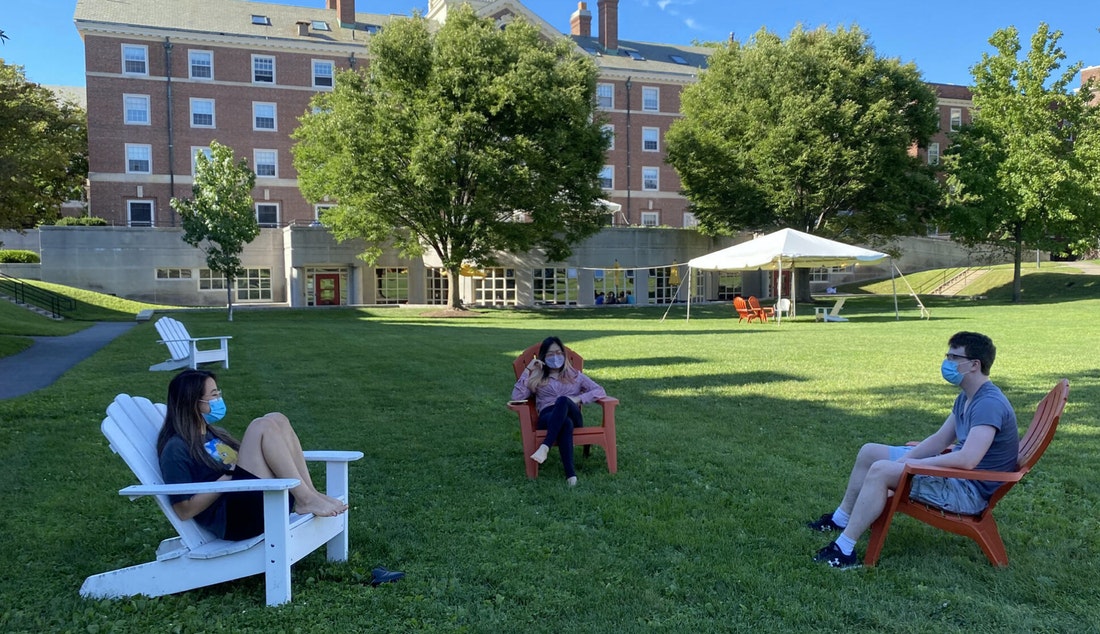 This image heads Harvard University’s list of Socializing Rules. None of these students is at serious risk of severe outcome from Corona.

I should have expected that my last post would provoke some angry replies [see UPDATE]. Now that my inbox is full of grumpy people, I will double down.

First, though, a parable from my very formative and disturbing time in American academia: I abandoned my professorial career at the height of the Great Awokening. Before I fled, I endured two pretty difficult years, navigating tidal of waves of nonsense and trying to stay uncanceled. In the midst of it all, I had plenty of time to study the institutional workings of the Woke. The fundaments of their dogma were laid by specific critical theorists long before I entered graduate school, but the system as a whole did not become operative until a long while later, as its acolytes ascended to senior faculty and administrative positions, and a distributed consensus emerged that the tenets of Wokeness were right and necessary and just.

People tend to believe things that further their personal interests, and universities are no exception. Wokification succeeded largely because it gave a lot of different people a lot of different things that they wanted. It gave the increasingly powerful university administration a reason to hire more administrators to manage diversity and ensure its forward march. Self-propagation is the highest goal of administrators everywhere. Wokeness also became a useful tool in ongoing turf wars between administrators and faculty. Diversity is a simple metric via which the administration can interfere with faculty hiring and academic operations; new diversity hires know who is buttering their bread and remain loyal to the administrators whose policies brought them in. For the increasingly mediocre and incapable faculty who now teach at even the most august American schools, the woke circus has its own attractions. It provides distraction from the unrelenting demands of objectivity and originality, and permits a pleasing, self-righteous indulgence in moral scolding. In Woke Studies, the answers are always predetermined and it is very easy to get anything published, provided you say the right things. For students, Wokeness has still other attractions—as a font of easy coursework, as an opportunity for social networking, and as a locus for the periodic ritual entertainment of false moral outrages and protests.

All of this is to say that Wokeness was selected from many aspiring ideological and intellectual programs, because it gave the right things to the right people. The bottomless mediocrities who helped construct the subgenre of critical theory on which the whole Woke phenomenon rests are not in charge of the Wokeness Circus. The administrators who promote and participate in Wokeness are not alone in running it, and they could never turn off or redirect the machine over which they appear to preside. Stepping out of line would only mean their personal destruction. The donors, the trustees, the tenured faculty, the powerful committees – none of these hold the reins either. Wokery is a self-organising decentralised movement. It is the sum of all the actions and opinions of all the people who have opted into it.

Importantly, Wokeness is also self-radicalising, in the way that many university-incubated ideologies turn out to be. Administrators or department chairs are constantly in danger of being outflanked on their left, and so they must adopt and endorse the most radical line to maintain their position. Otherwise they will be accused of racism or sexism or whatever and replaced by even more unhinged dangerous people. Also too, diversity is increasingly managed by dedicated administrative offices and special committees, which end up peopled with the most racially obsessed, divisive, woke-enthused types imaginable. Finally, nobody can gain support for or argue on behalf of anything, unless it can be cast in Woke terms. Want a new Egyptologist? Need to renovate the library? Collecting support for shortening the spring semester by a week? Well, you and your allies better explain why these initiatives will help redress historical racial injustices. In this way, all internal discourse and management comes to be about Wokeness, all of the time.

While Wokeness provides many personal incentives for true believers, it is destructive for the institutions that foster it. Those schools that have advanced very far down the woke path face semi-regular hate speech hoaxes and student protests, hordes of incapable hostile junior faculty, and massive curricular disarray. They are pretty miserable places to work and study and they are bleeding talented people and rapidly burning through the cultural capital they accumulated in prior, more reasonable decades. Nor is Wokeness, at the end of the day, even the best thing for many of its most committed adherents. Alas, this doesn’t matter either. Nobody, not even Kimberlé Crenshaw, can redirect or modulate Wokeness any longer.

All of this matters, because American universities aren’t just eager sponsors of racial hysteria. They have also emerged as some of the most radical centres of Corona containment in the world. Their students endure all manner of unreasonable hygiene measures. Constant testing, quarantining, mask rules, enforced isolation, officially encouraged snitching, movement restrictions, vaccine mandates — all of this and more are routine for millions of students. Klaus Schwab is not making them do this. The culprit is a broad, distributed adherence to the dictates of containment ideology, probably driven in no small part by emotional and ideological exhaustion with the prior tyranny of Wokeness. Now that everybody agrees, the self-directed, self-radicalising elements are in place: Administrators and committee chairs that are perceived not to be taking Corona seriously enough will be removed or sidelined in favour of more radical people who take things more seriously than you could possibly imagine. All of these schools now operate with a wealth of Corona Committees, peopled by all the most lunatic germophobic faculty.

Like wokeness, containment is destructive to the institutions that embrace it. American universities in particular depend on attracting students with over-provisioned campuses and entertaining student-life programs. They are basically massive amusement parks for young adults. Sooner or later, people will begin to think twice about paying tens of thousands of dollars a year to live in a prison camp. The destruction will start at less selective schools and proceed upwards. How high it will go, nobody knows. Also like Wokeness, containment is probably bad even for many of its truest believers and most committed enforcers, who now live lives of fear, desperation and isolation, and see now way out.

It is very easy to confuse cause and effect when examining the emergence of ideological systems. People raised up as leaders and heroes of emerging movements are almost never its directors, but merely expressions of all the separate beliefs and aspirations of those involved. Ultimately it’s just extremely difficult for any confined group of people, no matter how wealthy or powerful, to implement any kind of coherent agenda in heavily bureaucratised modern states. Policies can only be realised via a bureaucratic machinery involving thousands and thousands of people, all of whom have different incentives and answer to different bosses. Even when a single person manages to sell a policy to the bureaucratic machine, he cannot predict how it will be implemented and he will have no control over what actually happens. The agency of any single person is illusory here. It is the demobilised, distributed, complex institutional system that selects items and policies, via largely hidden processes.

To further irritate my readers, I provide the following sloppy sketch. It is the best that I can do with my fingers on the train. The inverted triangle represents the growing volume of people in the apparatus of government who have bought in to Corona containment, as we move forward in time. At the beginning — the tip — there were just a few. Now almost everybody is on board. Even my little institute, which has nothing to do with viruses or hygiene or public health, is a firmly committed node in the bureaucratic Corona network. 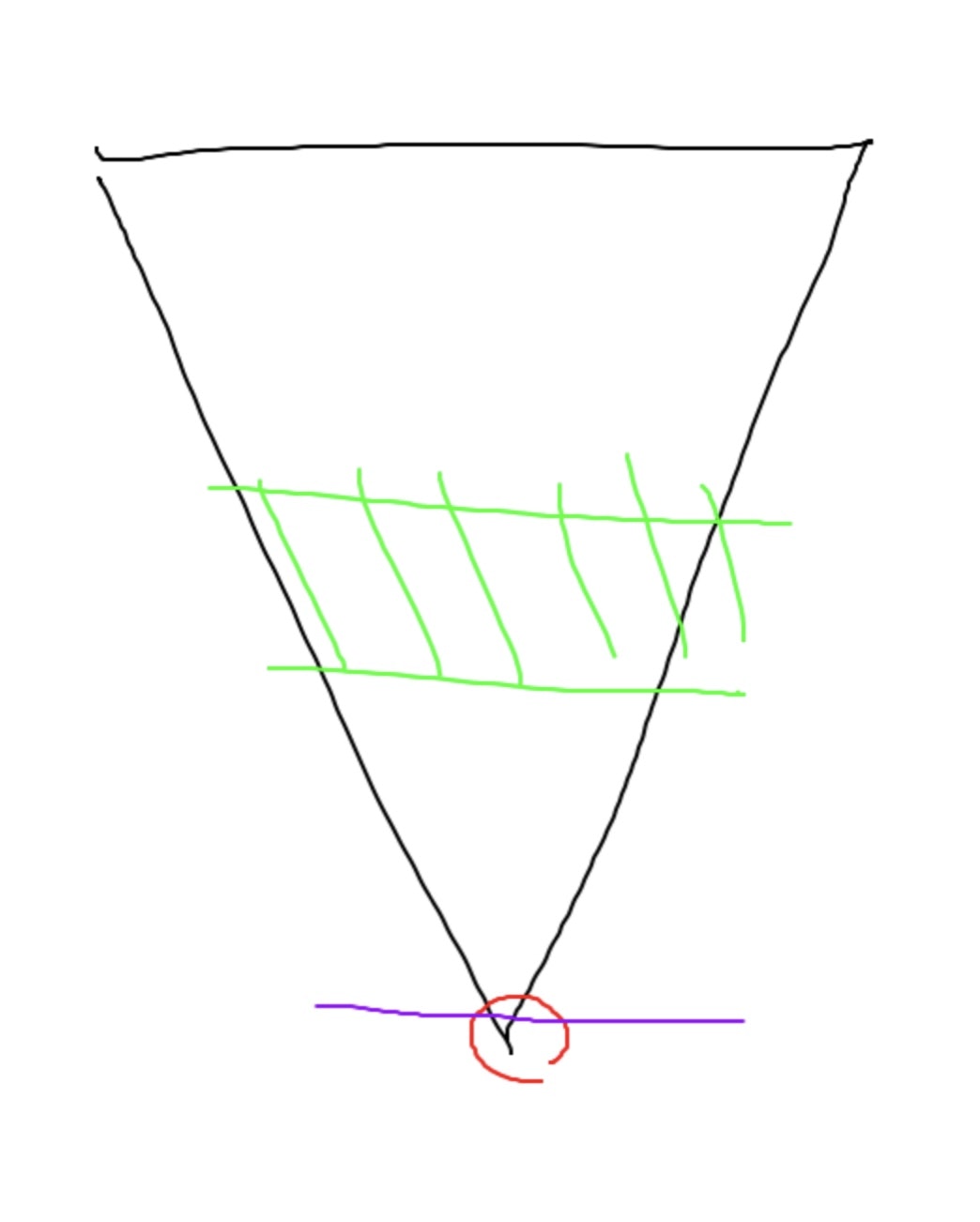 The green zone represents a notional threshold. Below this area, most policy initiatives won’t come to your notice or achieve very much. Not enough of the bureaucracy is on board. Much beyond this zone, and this policy is a part of your everyday life. The little circle at the bottom represents the maximum possible size of any directed initiative or conspiracy within the bureaucratic machine. For any such confined initiative to be realised, the conspirators must hope for adoption vastly in excess of their own numbers and their own powers, at which point they will have lost all prospect of steering the juggernaut. Finally, the purple line represents the furthest possible institutional horizon of our conspirators. They may have vague hopes of getting their plan adopted at all levels of government, but the only people on whom they can directly act and whose reactions they have any expectation of predicting, are below that line.

These constraints don’t exist in every country, but in the world of liberal democracy, this is very roughly how governance happens. We have to fit our theories of What Is Going On to some version of this framework, or they just won’t be credible.

For all the people preparing to tell me what an uninformed idiot I am, I’ve prepared this brief list of objections and answers. In my experience it covers about 80% of everything you want to shout at me right now:

These failures are too consistent to be accidental: The system is too large and unwieldy to act according to coherent strategies and basically lurches from one failure to the next. It is only good at sustaining itself and enforcing compliance.

Elites can’t be stupid, or they wouldn’t be elites: Yes, they can actually, but the behaviour of the system as a whole is more important to my argument. Because of these institutional constraints, the system is condemned to behave constantly in overtly stupid ways and there is nothing that any individual supergenius anywhere can do about it.

The system you’re describing is a just a facade, those bureaucrats are all pawns. There are secret actors pulling the strings behind the scenes: This is all but impossible, and one of the fundamental mistakes of conspiracy theorising on both the left and the right. Political power can’t be mediated in this way; power accrues to those who are perceived to wield it.

It’s absurd to say humans don’t plot and scheme: There are many, many plots and schemes all the time. But widely adopted, general policies are the reflection of a broad-based bureaucratic consensus and are by their very nature undirected.

You’re ignoring the fact that this is evil: No, I say all the time that it’s extremely evil. I am arguing merely that the locus of evil is not condensed in any single actor, but rather distributed, like a foul-smelling gas, throughout the entire system.

In sum: If I could wave a wand and send the whole globalist crew on a twenty-year mission to conduct a thorough tree census of Siberia, I would. But that wouldn’t stop any of this. Containment would continue on its current path, and a new collection of clowns and loser philanthropists would emerge out of the woodwork to take their place. Before long, Siberia would be very full of tree counters, and we would still be facing vaccine mandates and lockdowns and all the rest of it.

UPDATE: Allusions to angry replies are about enraged emails, not the comments on the last piece. I learn a lot from disagreement and back-and-forth with my readers; I merely find the outrage that some of my theories provoke puzzling and no little amusing.