This Is What Happens to Your Body on a Thru-Hike

From the original article on October 14, 2016, by Kyle Boelte at Outside Online.

This summer, my wife and I hiked the Colorado Trail, a 486-mile, high-altitude trek from Denver to Durango. While it’s a challenging hike (only about 150 people complete the trail each year), the Colorado Trail Foundation says many hikers finish in four to six weeks.

The hike ended up taking us 29 days, though two of those were zeros, as they’re called—rest days spent resupplying in town. That’s an average of 18 miles a day for the 27 days we hiked. Short days tended to be around 15 miles, which took us eight to ten hours, but we sometimes hiked as many as 25 miles in a day.

I was curious to know what hiking every day for a month would do to my body. Before we headed to Colorado, I weighed myself at home, monitored my pulse for several weeks with a Polar watch, had my doctor run blood tests, and completed a metabolic efficiency test at Real Rehab, in Seattle, to see how my body was utilizing fat and carbohydrates for fuel during exercise. When I got home from the hike, I ran the tests again. The differences in the results were pretty striking. 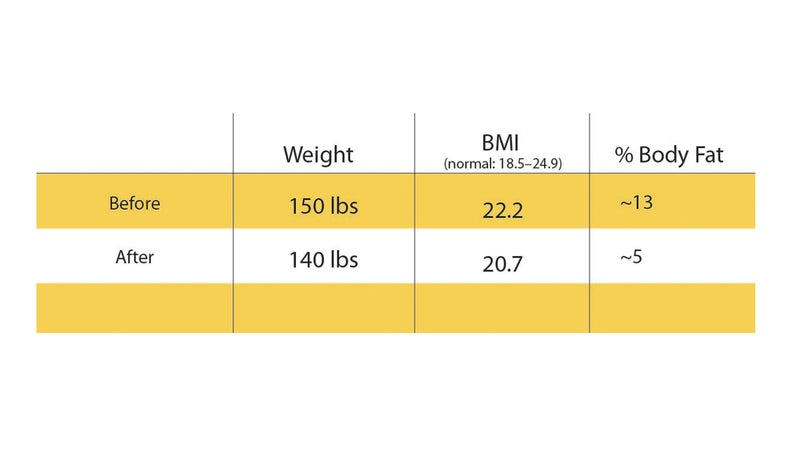 Before the hike, I was fit but not training for anything. I ran five miles a couple times a week, went mountain biking about once a week, and periodically lifted weights. Like most Americans, much of my day was spent in front of a computer. I was 35 years old, 5'9″ tall, and 150 pounds, with a BMI of 22.2 and body fat composition of about 13 percent.

Post-hike, I weighed 140 pounds, with a BMI of 20.7. My body fat was 5 percent, according to a Tanita digital scale. (Though the accuracy of bioelectrical impedance scales can be slightly off—it’s possible I could have been a couple percentage points higher, which would still be very low.)

Basically, I had walked myself into a super-fit athlete’s body. I joked with my wife that I should start a business called 8-Hour Abs. Really, just eight hours a day is all it takes!

Aerobic exercise strengthens the heart—it’s a muscle, after all. A stronger heart pushes more blood through the body with each beat. This increase in efficiency is reflected in a decreased resting heart rate. (Though a very low heart rate may have its own health risks.) After hiking for eight to ten hours a day for a month, my resting heart rate fell considerably, from 48 to 40 beats per minute. Back at home, my standard runs were considerably easier, though I did occasionally get woozy if I stood up too quickly. 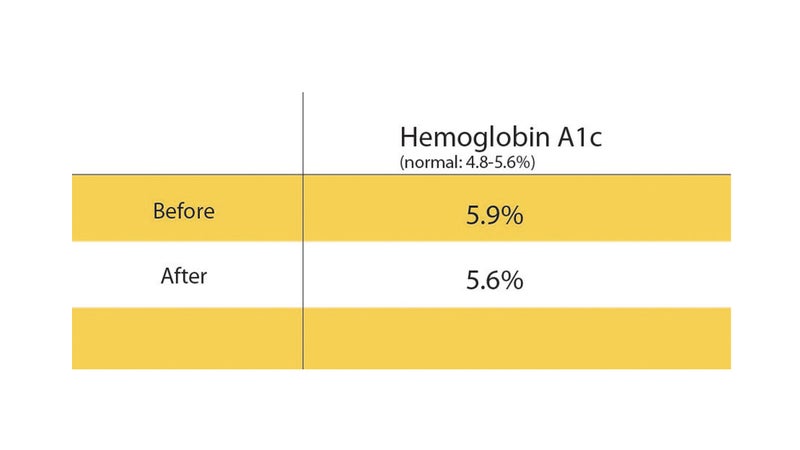 Before the hike, my doctor was concerned about my hemoglobin A1c number, which measures average blood sugar levels over a two- to three-month period. A result greater than 5.6 percent is an indication of prediabetes; my A1c was 5.9 percent. Given my active life, the result came as a surprise. It was probably due mostly to genetics (my dad is prediabetic), though all those pasta dinners, energy bars, and sports drinks I had consumed over the years probably didn’t help.

Before the trip, I was considered active by American standards: exercising for 40 to 60 minutes a day—but also sitting for at least eight hours while working in front of a computer. I was eating what I felt was a pretty typical diet for an endurance athlete: pasta, peanut butter and jelly sandwiches, and energy bars when I was on the go.

Most thru-hikers eat a diet rich in Snickers bars, dehydrated mashed potatoes, and other high-carb foods, but on the Colorado Trail, we stuck to nuts, jerky, dried fruit, and only one carb-heavy meal a day, like a mac-and-cheese dinner.

After the hike, my hemoglobin A1c dropped to within the normal range. My blood sugar levels were better controlled by my walking throughout the day (including after meals), rather than running or biking just once a day. That’s consistent with a 2012 study that showed walking after meals to be effective for lowering blood sugar levels. However, simply walking is probably not enough: had I eaten the normal high-carb thru-hike diet, I’m not sure if my hemoglobin A1c would have improved as much as it did. 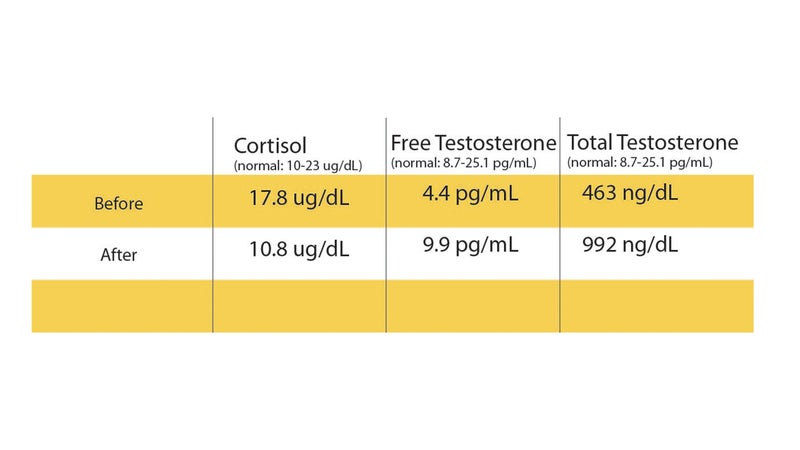 The two other blood tests that stuck out concerned my cortisol and testosterone levels.

Cortisol has several functions, but high cortisol levels are correlated with stress. My cortisol level was at the high end of the normal range before the trip and dropped by 40 percent during the hike—a testament to the stress-reducing benefits of being in nature, even when you’re pushing your body.

Testosterone regulates energy, libido, muscle growth, aggression, and a host of other functions. During the trip, my testosterone level more than doubled, which is a fairly astonishing increase. Thru-hiking presents many confounding variables, so it’s hard to know exactly why this happened. Maybe it was carrying a 40-pound pack for ten hours a day (weight training has been shown to increase testosterone); maybe it was being on an adventure and away from my regular domestic life. Whatever the cause, I’m not complaining. 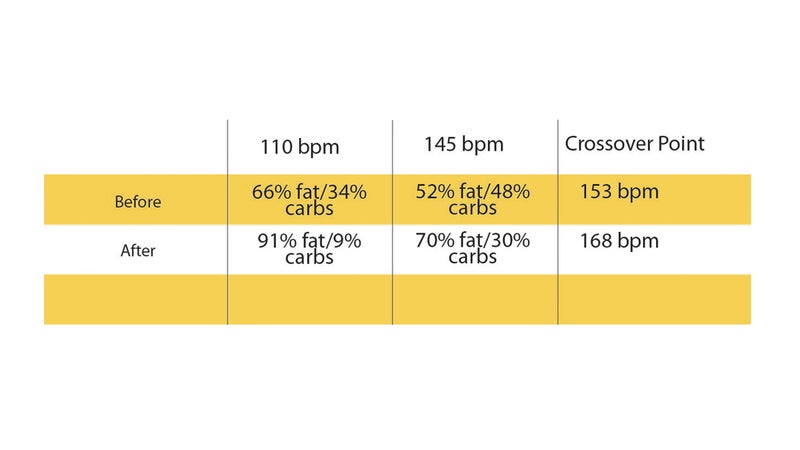 The body has two main energy sources: carbohydrates and fat. At low exercise intensities—like walking or jogging—the body is mostly fueled by fat. As intensity increases, the body begins using a greater proportion of carbohydrates. A typical person has about 2,500 calories of carbohydrates stored in their liver and muscle cells However, that same person—even if they are elite-athlete skinny—has 50,000 fat calories available. That’s a lot of potential energy waiting to be tapped.

For years, we’ve been told that carbs are the key to performance. That’s changed in recent years, as researchers have observed that, through diet and training, an athlete can burn fat at higher intensities than previously believed. The question I had before my thru-hike was this: Would walking all day, every day, for a month improve my metabolic efficiency when I run at a high intensity? In other words, could I become a better athlete by simply walking?

What does this mean? I can now go on long runs without consuming gels and other foods, or at least a significantly reduced amount. Also, the next time I go backpacking, I will be able to carry less weight in my pack because each gram of fat has nine calories, while a gram of carbohydrate or protein provides less than half that energy—around four calories. This means I can carry more high-fat foods like nuts and cheese, while cutting way back on sugary high-carb snacks like energy bars and candy. Plus, if I run low on food near the end of a trip (something that happened several times between resupplies during our thru-hike), my body will be able to run just fine on body fat until I make it to the next rest stop.

Now that I’m back home, I’m trying to maintain as much of my thru-hiking fitness as I can. In addition to my daily workout, I try to walk throughout the day, especially after meals. I’ve cut down on refined carbs. In their place, I pile my plate with vegetables and a good dose of fat. Two months after completing the Colorado Trail, my weight and body fat remain stable. I’m training for my first 50K.