Germany and the United Kingdom have essentially identical rates of vaccination. In both countries, about 67% percent of everyone is vaccinated. 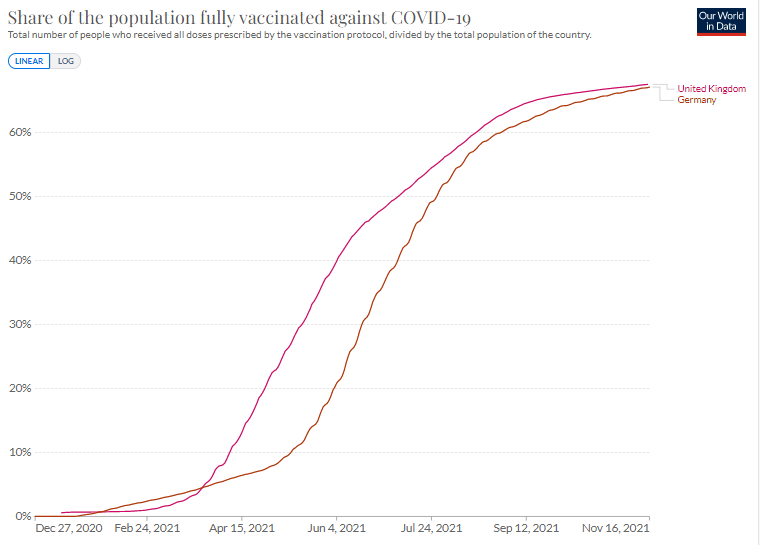 In fact, here in Germany our vaccination rates are likely understated, so we may even be slightly ahead of the British. 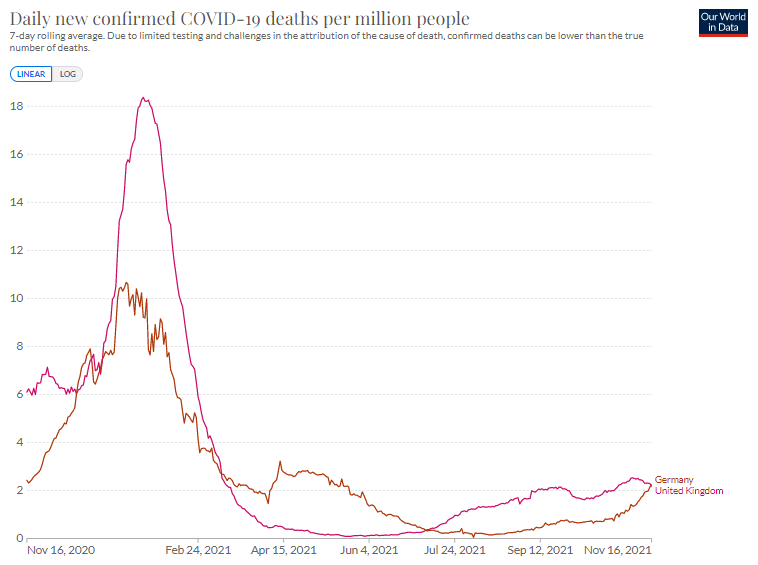 Why are deaths down in the United Kingdom, but not in Germany? 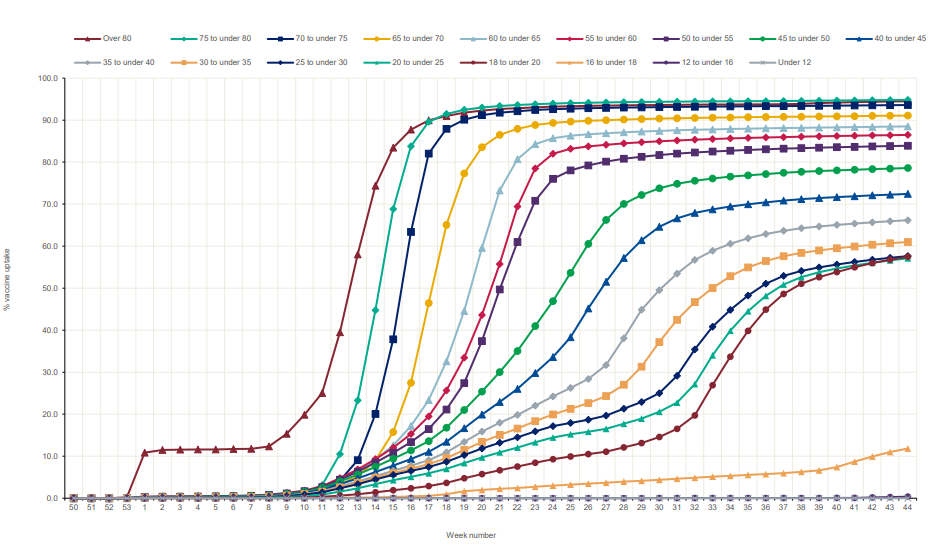 That might seem a small difference, but it reflects a vaccination campaign more carefully targeted at those most likely to die of Corona infection. One or two hundred thousand vaccinations in these groups can make a serious difference, for we have seen that the vaccines do reduce the risk of severe outcome. The effect fades, but even seven or eight months after vaccination, a vaccinated 80 year-old is the equivalent of an unvaccinated 70 year-old, as far as SARS-2 is concerned. 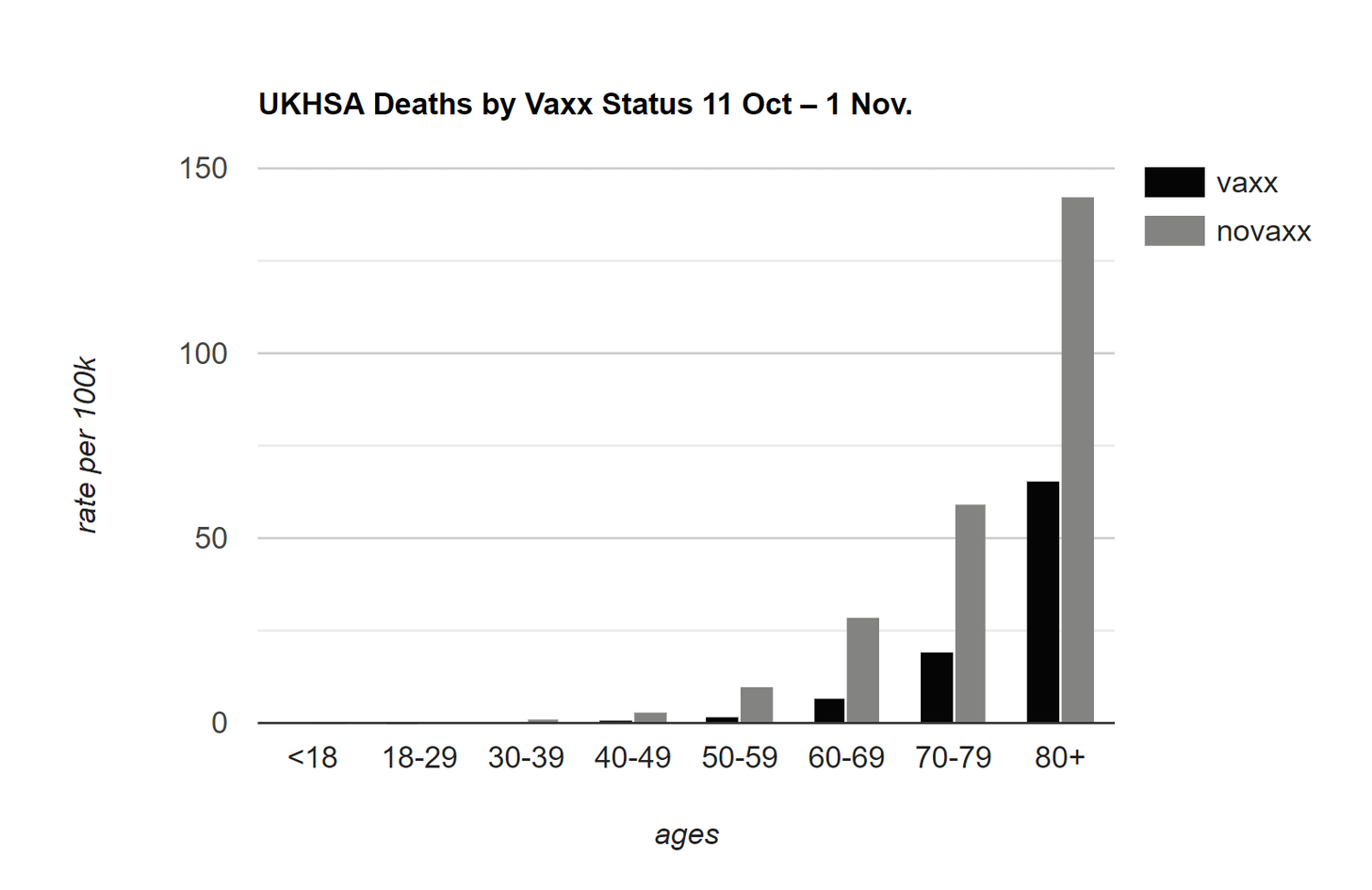 That’s far less than the vaccinators pretend, but even lacklustre reductions in risk can matter enormously, where that risk is substantial.

Now a familiar but important point:

We know from studies on influenza vaccination, that those most at-risk of dying from the flu are strikingly less likely to receive flu shots. This creates an illusion of high efficacy against severe outcome. There appear to be many reasons for this. Some of the unvaccinated are simply terminally ill patients in palliative care, but a crucial subset will be people who are for whatever reason hard to reach, because they are outliers and as such live at the edges of society. Some of them will be shut-ins, or immigrants who don’t speak German, or mentally ill, or eccentrics who refuse medical treatment in general, or whatever.

The worse you are at offering vaccines to these people, the more likely you will be to enter a bizarre hall of mirrors – a funhouse where overall Corona mortality never really declines, but your efficacy statistics show that the vaccines are fantastic at saving lives.

I suggest that this is what is happening now, and why places like Germany and Austria have been seized by such a frenzy for universal vaccination. Our vaccinators, besotted with the broken efficacy statistics that are to some unknown degree an artefact of failures like these, are manically sticking needles in all and sundry. None of this will do anything to bring deaths down, but as they vaccinate more healthy low-risk people, their efficacy statistics will only improve, which will in turn drive their mania and religious certainty to new heights.

What would very likely have made a difference, would have been finding and offering vaccines to that tiny 0.5% of the unvaccinated who are most likely to die, while the weather was still good and there was little risk of first-dose infection enhancement. We should not deceive ourselves: Many of these people are beyond the help of vaccines and will succumb to Corona anyway, while most of the rest will die soon of other causes, even if the vaccines save them for now. But this is the only place where there are gains to be made. Vaccinating millions of young people will do nothing, aside from causing short-term case spikes and deaths in some subset of them.